Unpacking the fridges of a post-modern renaissance man 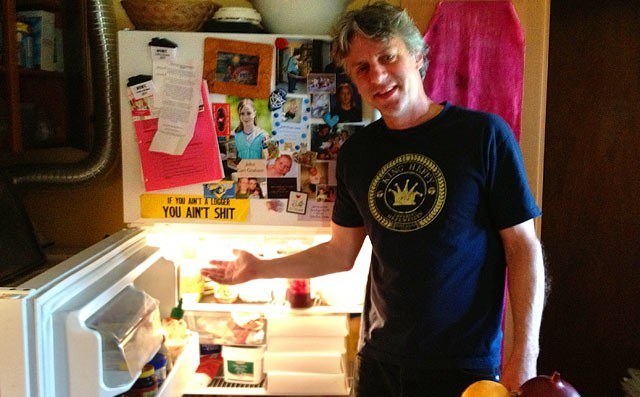 Stephen Vogler What's in my fridge

You know it's going to be a good ride when the proponent of a "What's in your fridge?" column says right off the bat — and pretty excitedly — "it's a disaster!"

But that was the whole point (ahem): to check out the assumption it would be curiouser and curiouser to unpack the fridge of Mr. Point himself, Stephen Vogler.

Stephen is like the "h" in "Whistler." Not flashy, but integral to it. To see what I mean, check out his latest book, Tales of Whistler, which I, and I think Stephen, too, is fairly proud to report was banned from B.C. Ferries because of its cover. It features nude skiers' "tails" — what else?

"It's kind of a memoir of growing up in this strange and bizarre town, starting with my experience living here in the '70s with my family when there were 500 people," he says.

Son of Betty, now 73, who still lives in Alpine Meadows and skis 40, maybe 50 times a year, and of Heinz — builder of homes and fine furniture, ace glider pilot, stonemason, welder, aircraft mechanic and the original renaissance man in the family who managed the building maintenance on Whistler Mountain for what seemed like forever before passing away in 2010; brother to sister, Vicky, and to Peter, also a musician and post-modern renaissance-type man, Stephen, in his current incarnation, is a writer, musician and arts activist who's the driving force behind the artist-run centre known as The Point.

Located where the old youth hostel used to be on the west side of Alta Lake before it moved uptown to its posh digs as part of the Olympic legacy, The Point, like Stephen, occupies an unequivocal locus at the centre of what many of us like to think of as The Real Whistler. That would be Whistler before it went uptown.

Thank God some authentic vestiges remain, like the funky main lodge from which The Point hosts everything from creative writing workshops to live theatre staged like the inimitable French dessert île flottante. In this case the stage floats on the water as the meringues float on a lake of crème anglaise. Audience members sit on the beach and enjoy, as attentive as diners with dessert spoons poised.

Here on what was once called Harrop's Point, since Bert Harrop built the first lodge here, then Cypress Point or, simply, The Point, Stephen lives with his twin 16-year-old daughters, Melissa and Katie, and his wife, Peggy, who's just taken over the Vancouver icon her dad started, Aphrodite's Organic Café and Pie Shop on Fourth Avenue.

The family has been living in one or another of the little cabins — and I mean little; the first one was 500 sq. ft. — since son Jonathan was born 19 years ago. (He's off globetrotting right now, maybe in Cambodia or Laos.)

But this, really, is a proper house, built in the 1920s or '30s by either the Harrops or the Fairhursts. It's 900 sq. ft., and like all houses of that era, the kitchen is big. "Kind of like a farmhouse kitchen, which is what I like," says Stephen. It's totally open to the living and dining areas, with the best views of Alta Lake in the valley.

So here's the fridge. It's a classic, white Maytag Performa and the first thing Stephen points out amongst all the photos is a sticker that was on the very first Point fridge they lived with, a sticker he used in one of his short stories. In big black block letters it yells: "IF YOU AIN'T A LOGGER, YOU AIN'T SHIT." This is very cool since Stephen is totally eco-friendly.

We swing the door open to his "it's a disaster right now!"

The top shelf is a kind of condiment disaster. We find, in part, raspberry jam; salsa; some sauerkraut (his German roots coming through; he's even learned to make his own, using a crock and natural fermentation, but, no, his mom didn't teach him how); miso paste; maple syrup for coffee and porridge, homemade dill pickles from Peggy's mom; olives; antipasto; tzatziki, hummus and some feta cheese.

"There are so many jars in here I don't have time to go through them all!" he says.

Next shelf, there's a big square tub of 3.5 per cent fat Olympic organic yogurt ("There's all that zero per cent stuff around — I don't understand that"); a gallon of organic milk; Kikkoman soy sauce; cream cheese; MaraNatha organic peanut butter; and some kidney beans he opened by mistake when he was in a hurry (They usually make beans from scratch).

'"We have all these big bags of dried organic beans and I have a pressure cooker which my mom did teach me how to use," he says. "We have Mexican food quite often and if you do the beans in a pressure cooker it takes an hour without even having soaked them."

On shelf three are some eggs, a can of Pilsner Urquall (his favourite), Earthbound Farms spring mix, potatoes left over from last night's dinner (veggie meat loaf from Aphrodite's), a cuke, a half tomato and some smoked salmon he got for playing a rave on the banks of the Squamish River last fall.

Next it's the drawers. One is a root veggie drawer featuring Across the Creek organic potatoes, organic onions and more potatoes. In the other drawer: snap peas for stir fries; leeks; more cuke; carrots; a grapefruit Peggy's mom brought back from her "snowbird" home in Nevada; and a rotting apple that gets tossed.

The door is another condiment midden. We don't delve into it because Stephen wants to get over to the fridge at The Point to see what's there. But we can't leave without noting the highlight: a bottle of prosecco from the wedding of the amazing sculptor and artist, Christina Nick.

So it's out the door and down 40 stairs amidst a few snowflakes to the main lodge with its beautiful hardwood floors and the table Andrew Stoner donated that was made from the cedar slabs from the old bar at the Christiana Inn.

In the bar fridge we find some cold drinks that will one day be sold. Back in the kitchen is a classic white Frigidaire from one of the little cabins. It's as blank as a tabula rasa. The only thing on the shelves is a lonely little white take-out container of an anonymous white substance. Perfect for turning up in one of Stephen's stories one day.

Glenda Bartosh is an award-winning journalist who nearly bought Stefan Ples's old house near The Point.