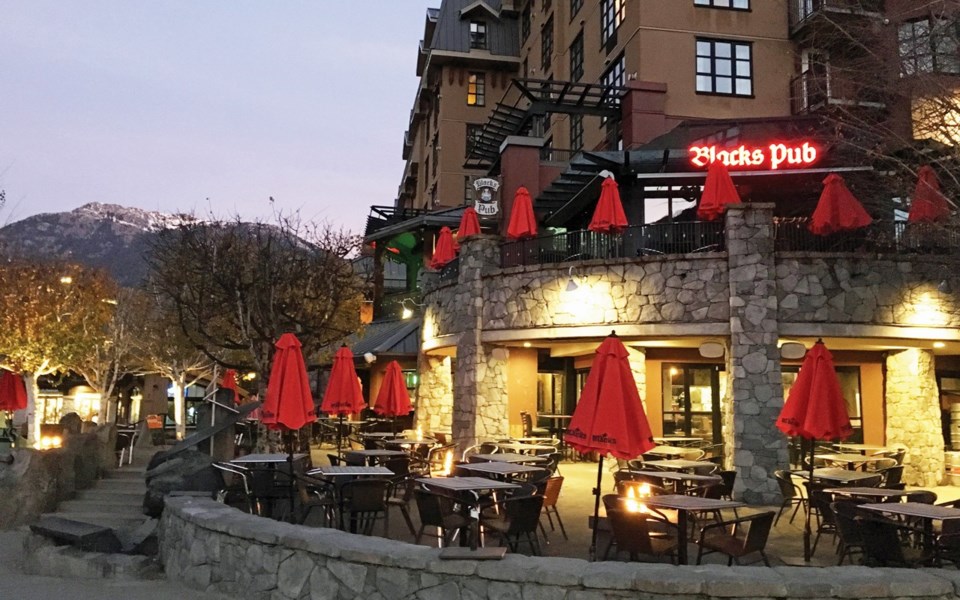 SOLD Black's Pub, one of the village's earliest bars when it opened in 1985, sold last month to another long-running resort operator: Gibbons Whistler. Photo by Braden Dupuis

When Lawrence Black first opened Black's Pub (then known as The Original Ristorante) some 30 odd years ago, it was part of a broader plan to launch up to 10 bars and restaurants in the Vancouver area. Knowing that the ski resort was a popular weekend getaway for the Lower Mainland crowd, even then, he thought a bar in the burgeoning community would be a great way to expose himself to the Vancouver market.

It wasn't until after he opened the pub overlooking Skier's Plaza on Dec. 15, 1985 that he decided to change course.

"I opened the bar and honestly, virtually the whole town came to wish me success and support me. That sold me. I never left," said Black.

On Jan. 15, Black closed a chapter that began 34 years ago, selling the pub bearing his name to another long-running resort operator: Gibbons Whistler.

"Thirty-four years of running a restaurant and a pub, it was time for me to move on," said Black, who added that others who "wanted to close it down, get rid of all my employees and turn it into a corporate box" have approached him several times over the years.

Gibbons Whistler CEO Joey Gibbons, meanwhile, has committed to keeping the existing staff on and learning from them as the business moves forward.

"Lawrence has been there for a long time, so we will respect what he's created and learn from it. Then maybe we will operate it as is for six months or something, and if we feel like we need to make some changes to move some walls around or whatever—we just want to learn about the business," Gibbons said. "When I was younger, I used to buy a place and shut it down and do a renovation and take down walls and then all of a sudden realize why that wall was there and been like, 'Ah, crap.' I've just learned to be a bit more humble with our approach, respect the people who are there and listen to them a lot."

There's no question Gibbons Whistler is the biggest player in the resort bar scene, and with the addition of Black's, now counts seven local bars, clubs and restaurants under its banner—along with running the Whistler Village Beer Festival and, for the first time this year, the World Ski and Snowboard Festival.

But even with all of the acquisitions over the years, Gibbons said he is adamant about preserving the character of Whistler.

"I'm quite passionate about making sure the fabric of our community is maintained, that character that we know, and that soul. I feel like that's a huge part of what's allowed us to be successful," he said. "You look at some of these other villages and communities in Europe that have been bought out by people who aren't from there and it becomes a bit of a soulless strip mall."

Gibbons had initially approached Black to buy last spring, before backing off in August when a vote passed to terminate the Sundial strata corporation, a mixed-use Phase 2 and commercial strata that includes Black's Pub, Mexican Corner and Sushi Village. Although the issue is still winding its way through provincial court, if approved, the strata termination—launched by one of Canada's largest real estate developers, Concord Pacific, which owns more than 80 per cent of the strata lots at 4340 Sundial Crescent—could trigger the sale of the three holdout properties for well below market value.

"Normally we would buy the real estate and the business, but in this case we just bought the business and Lawrence is dealing with what he needs to deal with in the real estate stuff with Concord," Gibbons said. "Whistler is becoming more and more popular and people from outside of town are getting excited to get their hands on things, which is great, but at the same time we're hopeful that the people who are coming to town don't want to just take from our town."

Black, who forged countless relationships over the years, including with fellow restaurateurs Miki Homma of Sushi Village and Wayne Katz of the Lift Coffee Company, among others, said it's those personal connections he will remember the most.

"I look back on how fortunate I have been. To meet all those people, to make friends with them—I still have incredible friends here," he said, adding that he's staying in Whistler—although there might be a bit more sailing in his future now that he's retired.

"I've got a nice boat that I didn't get to sail once last summer," he added. "I was meeting some people today saying, 'What sailing trips are we planning?'"