Waste not, want not at The Velvet Underground

It doesn't take long after meeting The Velvet Underground owner Amy Rafferty to realize how much she abhors waste.
May 17, 2019 8:00 AM By: Dan Falloon 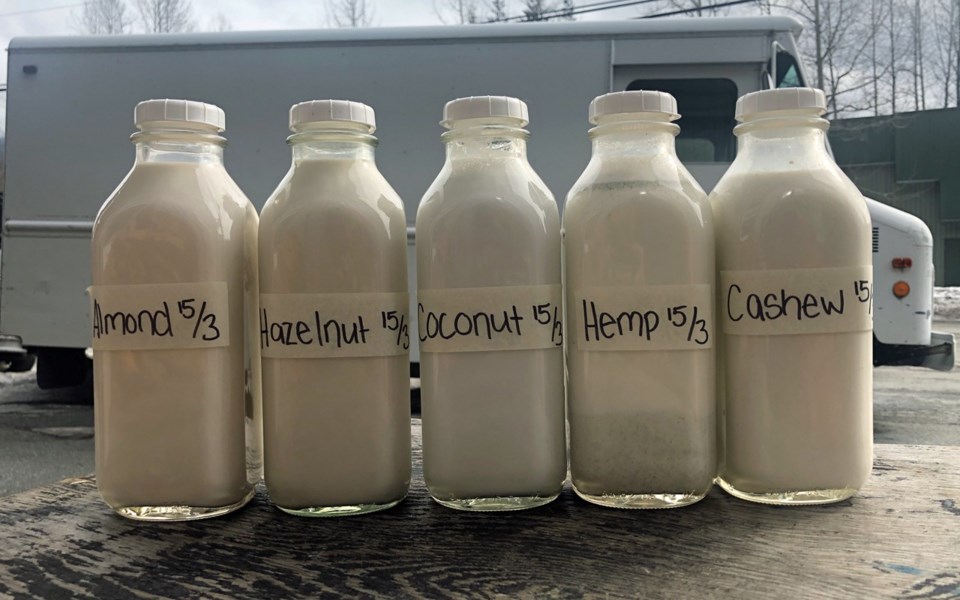 It doesn't take long after meeting The Velvet Underground owner Amy Rafferty to realize how much she abhors waste.

Apart from selling samosas from Abbotsford, all products at the Function Junction combination vintage store and coffee shop are made in-house. A major philosophical tenet of the approach is that fresher is better, but another driving force is to reduce its use of packaging.

When the coffee shop first opened last year, it opted to make its own nut milk for consumers to put in their hot drinks; The Velvet Underground recently went a step further, making the almond, hazelnut, cashew or hemp milks available for pre-order for $6.50 a litre. Customers must bring their own containers.

Rafferty first posted the offer to the shop's Facebook page on May 8 before sharing it to the Whistler Summer 2019 group.

"I didn't think it would be that popular, but when we posted it in Whistler Summer, it blew up," she said. "We probably did 10 litres in our first week.

"When people get wind of it, we feel it will be really popular."

The Velvet Underground is also currently experimenting with coconut and macadamia nut milks. Rafferty has tried to make oat milk but hasn't been able to get it up to her standards; instead, the shop sells Minor Figures Oat M*lk.

Having worked in a coffee shop before her entrepreneurial days, Rafferty saw firsthand how many one-litre containers of nut milk shops went through, realizing that getting dozens of litres from a single five-kilogram crate of nuts would be a step forward in waste reduction.

While some people making nut milk at home include extra ingredients such as dates or xanthan gum, Rafferty said Velvet Underground keeps theirs simple: nuts and water.

"The processed stuff you buy has salt, sugar, palm oil, a million different other random things that are not good," Rafferty said. "When you are drinking plant-based milk, a lot of the time, it's because you care about the environment.

"When it's full of palm oil, that's pretty counterproductive."

According to the BBC, palm oil production was responsible for up to eight per cent of Earth's deforestation between 1990 and 2008. Though some sustainable palm oil options now exist, there are dozens of different ways palm oil might be labelled as an ingredient, making it difficult for consumers to suss out whether it's in a given product, let alone how it was grown.

Making the milk itself is a simple, albeit somewhat lengthy process, Rafferty said.

"You just soak them for about five hours minimum. Usually, we'll do it overnight. Then you blend it in a blender for about five minutes or so, depending on different milks, it might change your blending," she said. "Then you strain it through cheesecloth."

Naturally, with a sewing company in Rafferty's fold, The Velvet Underground uses its homemade cheesecloth to strain the meal from the milk, which will be made available for those looking to make their own milk at home.

The leftover almond meal and hazelnut meal gets a second life in brownies for sale at the shop.

"The more stuff we can not waste, the better," she said.

Rafferty said nut milk recipes are easy to find online, and anyone looking to try their hand at making it can try different things to adapt it to their personal tastes.

"We play around with the ratios, but what we use it for is mostly coffees and smoothies," she said. "At home, if you were making it for yourself, you could make it as creamy as you wanted."