What's in your fridge? 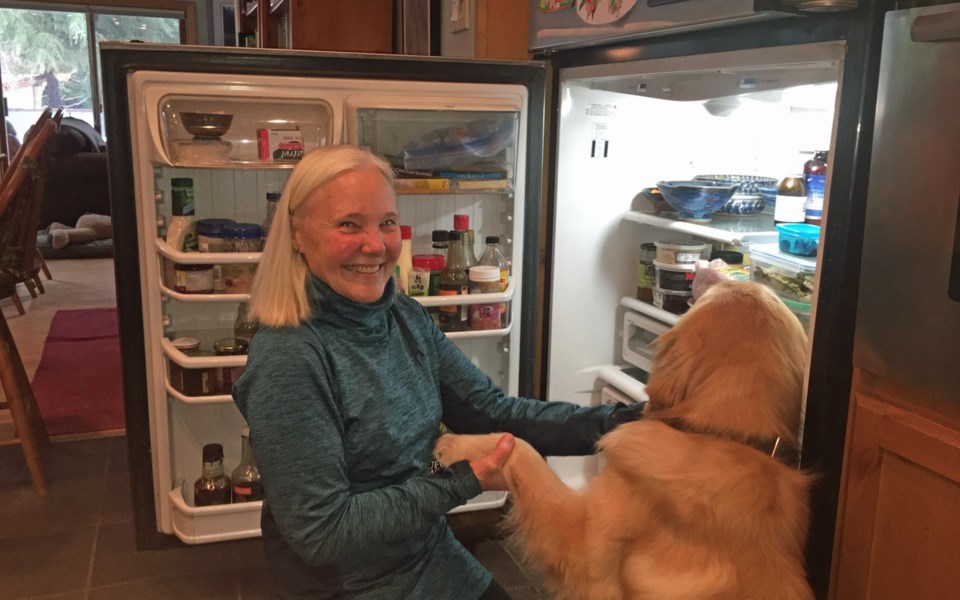 When Kris Shoup landed in Whistler in 1976 for a summer job, she didn't have a cell phone, of course. She still doesn't, of course. Which says a lot about Kris, her style and her fridge.

When it comes to Whistler, Kris is one of those timeless classics who has pretty much seen it all, in more ways than one — especially behind the scenes when the resort was young and, like a fumbly kid, still needing training wheels.

It's totally fitting that back in 1995 Kris was named Citizen of the Year for her community contributions, which alone could fill this column. And it was equally fitting she was nominated for the honour by another Whistler classic, the late Florence Petersen. If Whistler is Never Never Land, then Kris is the kind of practical, good-hearted fairy godmother who makes good things happen no matter what blows in.

It was one of those crazy summer job moments in June more than 40 years ago when Kris herself blew into town. You know, a job "somewhere else" that seems magical. You figure you'll be back to reality in a couple of months, but end up spending your whole life there.

Originally from Ottawa, Kris was living in West Vancouver at the time. "I came up for the summer to run the vet clinic in Alpine Meadows on Needles Drive. Bob Skinner was the vet, and there was Bob's ski chalet with the big double garage ... so he put a vet clinic in the garage," says Kris. (Zoning? What Zoning? There was no such worry then!)

"It took me about two weeks in Whistler to go, oooh, I don't think I'm leaving. It was summertime and it was the best! There were five lakes to swim in — that's my thing, going to lakes. I didn't want to leave. I mean, can you imagine, hiking up in behind Alpine right where I lived and it was, like, oh my goodness gracious!"

Skiing — at least downhill — has never been a big deal for Kris. But cross-country skiing? Right up there with the lakes.

Ironically, it was the lack of snow in '77 that closed Whistler Mountain right after Christmas (no Blackcomb then), driving her from front desk clerk at the now-defunct Whistler Inn back to Ottawa until muni hall, as it's fondly called, lured her back as a building inspector. From there, it was a short and surprising leap into the municipal clerk's chair when the mayor of the day waved his magic wand.

"Pat Carleton calls me into the office and he goes, well, congratulations, Kris, and I'm going, what!?, what!?, and he's going, you're the clerk!" she says.

And so she was, for almost 10 years, keeping we keener reporters at the Whistler Question on track and out of the glue along with anyone else regularly attending those early "bun tosses" as Paul Burrows, another Whistler classic, called Monday night's council meetings featuring: The Developers. The Dreamers. The Contrarians. The Hangers-on.

Then there was all the volunteer stuff. If you needed a secretary for Whistler Health Care Centre, you called Kris. One for Whistler Museum for nearly 20 years? Kris. Somebody on the daycare centre board? You got it — Kris. When her lovely daughters, Rebecca, Rachel and Chana (all now hovering around 30 years old), were in school it was Parent Advisory Council volunteer time. And if you're a local parent or student you know Kris from her years as administrative assistant at the local high school and Spring Creek Community School, where she works today.

Reading all this, it might feel like two lifetimes of contributions and Kris is, like, 200 years old. But she's not! In fact, she is disconcertingly similar to the bright 26-year-old who came to Whistler in the '70s.

This is all something of a miracle. So I'm really curious what we're going to find in her fridge, which sits in the middle of a comfortable, open-plan kitchen in an appropriately classic, relaxed cedar-siding chalet in Barnfield Farm, the employee-housing subdivision near Whistler Cay. Hubby Alex Kleinman built it.

"We were really, really lucky because we had sold our place on the West Side and rented for three years, and decided we had to have a lot because there was no way we could live in someone else's house," Kris says. "Alex came home one day and he goes, I want you to see something, and I said, OK, and he said I hope you really like it, and I said, OK, and he said, yeah, because I bought it..."

The fridge in this lucky house is the original from 18 years ago — a stainless steel GE, freezer on top and fridge below. It sits in a mostly cedar-panelled kitchen, facing three windows that frame the mountain forest and two cherry trees that are covered with pink blossoms every spring. Kris's big garden is out there, too.

This is a welcoming, plentiful fridge. Five humans and four animals eat out of it: Kris, Alex and daughter Chana along with two high-school international students, Oda Amundrud from Norway and Isabel Al-Charrabe Alvarez from Spain; the lovely golden retrievers, Broderick and Meghan; and two cats, Romeo and Juliet.

Broderick is very curious about this fridge and what's happening. Kris has to push him out of the way to open the fridge door...

Tune in March 1 to explore what's inside.

Glenda Bartosh is an award-winning journalist who, as a cub reporter, was often grateful for Kris Shoup's level hand. She will be writing in this space, every two weeks.