What's to gain by letting risk in

The code of the fisherman is to stare every day, unflinchingly, at the sea. Fishing has been in Hiroshi Shirakawa's family for more than 15 generations.
Nov 3, 2019 7:00 AM By: Lisa Richardson 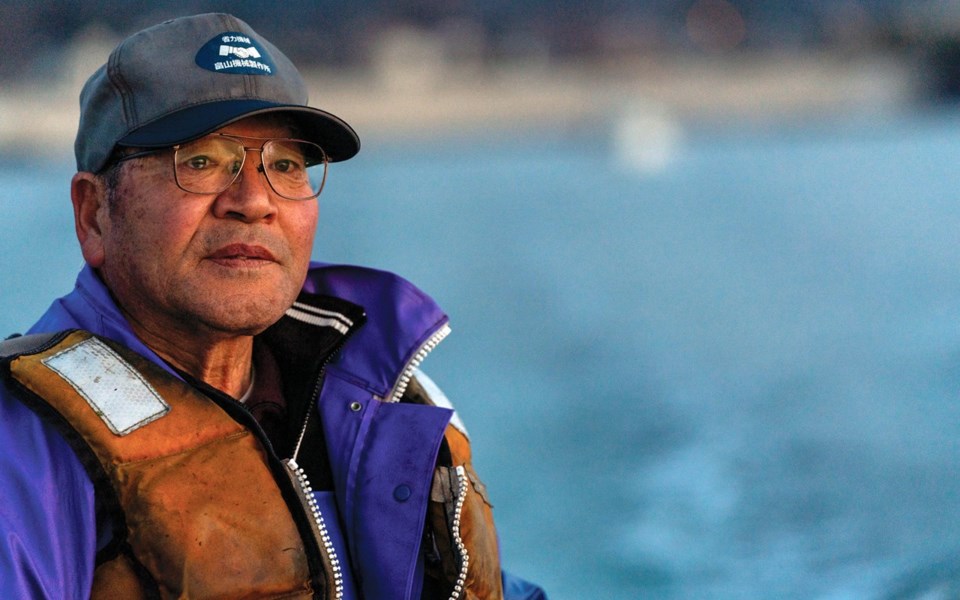 SAIL AWAY Hiroshi Shirakawa heading out onto the vast ocean to harvest seaweed. Photo by Angela Percival

The code of the fisherman is to stare every day, unflinchingly, at the sea.

Fishing has been in Hiroshi Shirakawa's family for more than 15 generations. At 72, he still operates a seasonal seaweed harvesting operation on Japan's northeastern coast, putting out to sea from his village of Oya every morning before dawn, and returning with a harvest for his crew of 70-something women to process, right there, on the shore. It's practically in his DNA to see the ocean's danger and its bounty as two sides of the same coin.

In April, I went to the Tohoku region of Japan with a team from Arc'teryx to cover a story about design responses to the devastation caused by the Great East Japan Earthquake and tsunami of 2011. We met with Mr. Shirakawa, on the shoreline where his house used to be, and asked him to tell us about that day.

The country itself is a series of islands thrust up from beneath the seabed millions of years ago by the collision of continental and oceanic plates. Tallying 1,500 earthquakes a year, Japan has one of the most sophisticated disaster preparedness systems in the world.

Shirakawa grew up hearing his father's tales of the huge earthquake-triggered tsunamis of the past. But he'd never experienced anything as intense as the 2011 earthquake.

That day marked the one-year anniversary of his father's death. As his house shook, Shirakawa gave up any thoughts of what his family might do to honour their ancestor, and prepared to evacuate immediately. He carried an elderly woman on his back and ushered his family up the hill to the highest point behind their homes.

He didn't stop to gather anything and so, he lost it all—his home, personal effects, family treasures, money, photographs. But, when a massive black wave surged in and swallowed up the coast 15 minutes later, he didn't lose his life.

The world would later learn that it was the most powerful earthquake ever recorded in Japan. The ensuing tsunami traveled at 700 km/h for up to 10 km. In some places, the wave reached heights of 40 metres. More than 22,000 people were killed. Just under 4.5 million households were left without electricity, 1.5 million without water. Half a million buildings were damaged or destroyed.

Eight years later, we travelled along the coastline visiting small community centres that have been designed and donated by a movement of volunteer architects, called Home For All, in response to the tragedy.

The Japanese government has a readily accessible supply of emergency temporary housing—demountable containers they can quickly deploy to shelter the displaced. Survivors would spend several years living in the stasis of an emergency shelter.

Up and down the coast, hectares of temporary houses were set up to replace the homes that were destroyed. Home for All wanted to give those displaced residents spaces in which to heal together. The volunteer initiative has collectively donated 17 beautifully designed buildings to the Tohoku region since the tsunami.

The clean-up and recovery took years, but to a van full of outsiders unfamiliar with the zone, the only evidence of the disaster was in the kilometers of construction projects underway. All along the beautiful northeastern coastline of Japan, massive concrete seawalls are under construction. They run for 395 km and some tower over 20-m tall, completely obscuring the sea. The cost of this "mitigation" project designed to hold the ocean back has been reported to be 1.35 trillion yen ($16 billion).

To get to the site of Mr. Shirakawa's former home, one has to drive past more than a dozen pieces of heavy machinery—cranes and backhoes and men in hard hats, building a three-m-wide, 10-m-tall wall of rip-rap, a giant reinforced barricade between the land and the sea.

"What do you think of these walls?" I asked Mr. Shirakawa.

He has ridden commercial tuna boats up and down swell the size of mountains. He was once almost swept away in a rogue wave as he cleaned his boat. He was awarded a medal for his help cleaning up in 2015 after an earthquake in Chile triggered a tsunami along the Japanese coast. He has spent his life in relationship with this great moving power, gazing out at it, sailing out to make his living from its fish, seaweed, offerings, encountering its danger.

Now, his community has been destroyed. He laments all the people who no longer live there. Things have changed. Still, he goes out every morning to experience the most beautiful sunrises. His crew fall back to the familiar routine of washing, rinsing and pressing the seaweed he comes back with. But when he stands on the shore of his hometown, he can no longer even see the sea. The wall is a barricade that has blocked his relationship with the ocean. It has, conceivably, made him more vulnerable, not less.

"Now, how will we see the tsunami coming?"

He shakes his head.

The small community space that Home for All built in front of Shirakawa's former home serves the local fishermen and women—they park their forklifts under its roof overnight, can warm up around the table over coffee after they've brought in their dawn catch.

It doesn't replace what was destroyed. It's not a solution to a powerfully destructive tidal wave. Sometimes the washroom gets dirty and no one wants to clean it up. But as a response, it points us to the kinds of acts that might uphold us in the face of earth-shaking calamity, ones that build relationships, instead of ones that sever them. These small buildings are a kind of resistance, not to disasters, but to disaster capitalism; reminders that we cultivate resilience not in bunkers, or behind barricades, but around a table, under a common roof, letting our guard down, gathering together.

The Velocity Project: how to slow the f*&k down and still achieve optimum productivity and life happiness. Mr. Shirakawa and the Home for All story are currently featured in a short film by Jordan Manley at arcteryx.com as part of a celebration of Problem Solvers.