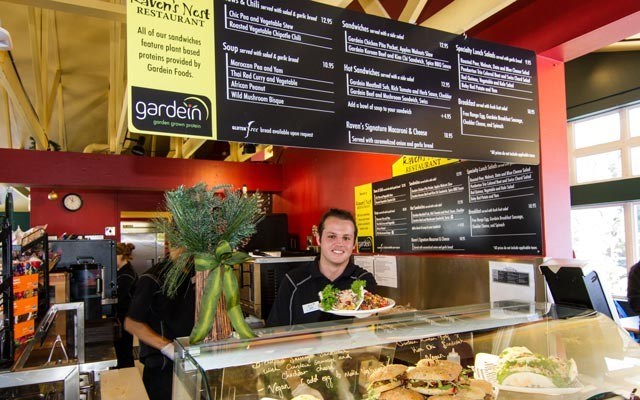 If you've been up the mountain at all this season, you've probably noticed all the changes afoot at Whistler Blackcomb (WB). And no, I'm not talking about the new multimillion-dollar chair, or the state-of-the-art RFID gate system, but the complete transformation of WB's on-mountain food and beverage operations.

From the mountain's first vegan and vegetarian restaurant, the revamped Raven's Nest, to the delicious curries on offer at the Roundhouse and Wizard Grill from Vancouver restaurateur and entrepreneur Vikram Vij, to the reserve wine lists courtesy of Araxi found at Steeps and Christines, Whistler Blackcomb has taken a step to reflect the modern tastes of its cosmopolitan guests.

"A lot of the other ski resorts, and not to put them down, are not changing very much," said WB's executive chef, Wolfgang Sterr. "We used to compare ourselves to other ski resorts and then we went to Vancouver and did some benchmarking, and we learned that a lot of our clientele that comes from Seattle and Vancouver goes out to dinner a fair bit. We looked and analyzed what people are eating in the city and what the food trends are in the city."

Sterr has overseen a windfall of change behind the scenes since taking over the job in 2011. A vegetarian himself, he said it's essential that the full range of food options is available so guests can have the right fuel for a day on the slopes.

"I like the outdoors and I can tell if I don't eat healthy, I won't have the energy to do what I want to do," he said.

One of the first major changes came last year at the Crystal Hut, where Sterr and his team of chefs scrapped a more basic burger menu in favour of a simplified, gourmet approach. Now there are three patties on offer instead of half a dozen: a hormone-free beef or chicken burger, or the quinoa version, that you can top with an array of delectable sauces and aiolis, as well as your choice of upscale toppings served on a ciabatta bun baked at a locally owned bakery in Vancouver.

Some of the more recent updates include the fresh-look Winemaker Apres series at Steeps and Christines. With four events through the winter, the dinners will feature a five-course meal prepared with only locally sourced ingredients paired with a B.C. wine.

WB will continue to offer one-of-a-kind culinary events with a special dinner Jan. 10 hosted by David Hawksworth, of the award-wining Hawksworth Restaurant in Vancouver, who will showcase the best of B.C. ingredients.

The many changes have also come with a shift in culture in Whistler Blackcomb's kitchens, Sterr said, with less emphasis on processed foods and a commitment to serving up fresh, wholesome foods from scratch.

"In the past I feel like we've done too much, and this year we've pulled back a little bit and simplified," he explained. "Everybody (at Whistler Blackcomb) is passionate about food in a different way, but I think the common ground we have is we all strive to be the best and serve the best quality possible."

For more information, visit www.whistlerblackcomb.com. Vikram Vij will be appearing at the first of four tastings at the Roundhouse Lodge this Saturday, Dec. 20.