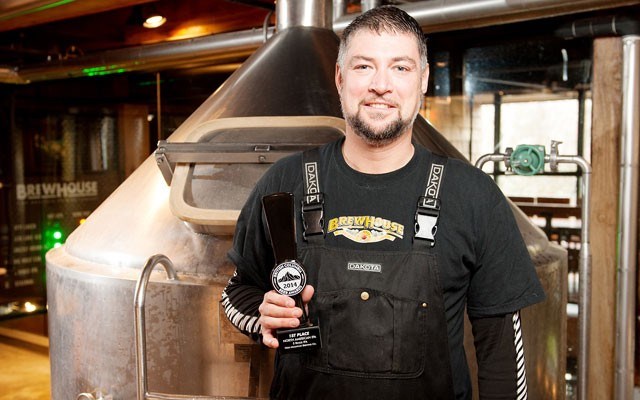 When Whistler Brewhouse’s Derrick Franche accepted his B.C. Beer Award last month for the competition’s best IPA, he saw the same reaction as two years ago when he took home the same honour.

“People were looking at each other like, ‘Who’s this guy?’” Franche laughed.

But even if the majority of B.C.’s craft beer aficionados may not have had the chance to sample Franche’s distinctive 5 Rings IPA — which is only available at the Brewhouse — Whistler’s libation lovers already know what the rest of the province is slowly coming to realize: this guy knows what he’s doing.

Franche has become a regular at the annual craft beer industry awards — his Lifty Lager took home silver last year — and despite not having the exposure or retail sales many of his fellow brewmasters enjoy, he’s put the village pub on the map for its selection of boldy flavoured in-house beers.

And while he’ll tell you he doesn’t like picking favourites, the labour-intensive 5 Rings IPA holds a special place in Franche’s heart — and pint glass.

“I like all the beers I make, because they’re like my kids basically. But I call this one the ‘backbreaker IPA’ because I put a lot of work in it,” he said. “It’s the beer I hang my hat on and the one I like to drink, basically. But you got to be careful though. If you sit down and have three or four of these things, you’ll be hammered.”

At 7.3 per cent, 5 Rings is a deceptively strong IPA that doesn’t drink like one. Using a combination of Saskatchewan and U.S.-grown hops, the bitter, hoppy punch is balanced out nicely by some caramel and biscuit malts, with fresh, citrus-like notes on the backend provided by a bit of Amarillo.

Franche will be the first to tell you that his IPA is an acquired taste. In fact, the Brewhouse bartenders are instructed to give anyone who orders a pint fair warning. But as the region’s craft beer industry develops, so too does drinkers’ tastes.

“Five or 10 years ago in B.C., people were still getting used to amber ales and different kinds of lagers other than light blonde lagers. Now, with all the exposure craft beer is getting, people are getting to know what these styles mean,” Franche said.

“I don’t think you can even call yourself a brewery now without having an IPA. It’s one of those beers I think every brewery needs because there are so many people who are very much attached to the IPA scene. If there’s a day or two here where the IPA’s not on tap, people will actually walk out.”

Now, with a fistful of industry hardware on his mantle, Franche isn’t even entertaining the thought of returning to the microbrewery grind. Because he only brews in small batches, Franche can afford to use more expensive, high-quality ingredients. He also enjoys a healthy work-life balance that most people in Whistler pine for, and he has no plans of looking back.

“I don’t think I’ve ever had a job quite like this one and I know if I leave here, I’ll be going back into the punching-the-clock mode, where you treat it as a job. And I treat this as a job but it’s actually more of a lifestyle,” he said.

“When the snow’s really good, I’ve got the ability to go skiing, or when it’s really nice out in the summer, you’ll probably find me out on the golf course. Sometimes you’ll see me upstairs in the brewery at weird hours and that’s because I’m allowed to do that. As long as the beer’s on tap, no one really ever gripes with me.”