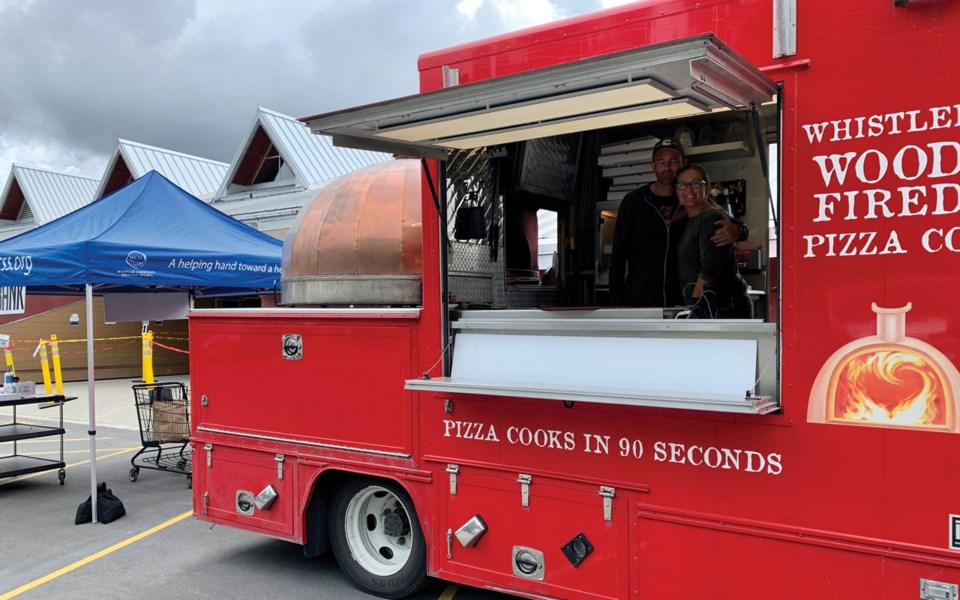 BLOCK PARTY Korey and Tess Klein, who have been operating the Whistler Wood Fired Pizza Co. since 2010, have lobbied the muni to allow them to continue holding block parties in residential neighbourhoods during the pandemic. Photo by Brandon Barrett

It's a sunny late-May day, and Korey Klein is busy making pizza out of the bright red Whistler Wood Fired Pizza Co. truck he started with his wife more than a decade ago. Parked in the lot at the conference centre, he is making free pizza for the users of the nearby food bank. Later asked if he had to get permission from the RMOW to set up here, Klein responds: "I didn't know that I had to ask the municipality to feed people that are starving in our community, but I suppose if there's a bylaw that prevents me from [doing that], I would be more than happy to pay for it."

Since COVID-19 hit, Klein has been hosting neighbourhood block parties around town as a way to connect isolated neighbours and give back to the Whistler Community Services Society—he has donated a slice to the food bank for every large pizza sold. But the block parties, which see him park in a driveway of a community member who has invited him there to sell pizza pre-ordered and paid for online to anyone in the neighbourhood, also serve as something of a statement to a local government Klein feels has been too restrictive during the pandemic.

"I'd like them to come to the table," he said of the RMOW. "I'm not looking for a pat on the back. Honestly, I'm not. What I'm looking to do is take care of my family, take care of our friends, take care of our community and to continue to survive in Whistler in what seemingly looks like insurmountable odds."

In an industry that relies on large gatherings, Klein has seen his business slow to a trickle. Unwilling to go on government assistance ("There's people that need the CERB and they should have it," he said), Klein penned a letter to mayor and council last month asking for some sort of temporary-use permit that would allow him to continue operating in the community.

At the May 5 council meeting, held virtually, Ted Battiston, the RMOW's GM of corporate and community services, said while such a move is possible, it would be a long and involved process. "Operation in that location is absolutely inconsistent with the zoning bylaw," he said, referring to the neighbourhood parties. "Changing the zoning bylaw or altering it in some way, either through some temporary provisions or a change in the actual zone, would require multiple readings of council. It is possible—a public hearing to change the zone. It is a substantial change."

The concern for the municipality is that even a temporary permit could open the floodgates to other operators looking to set up in Whistler's residential neighbourhoods, an idea that Klein found "absurd" as the only long-term, Whistler-based food truck in town.

"No one is going to take their 30-year-old food truck [from Vancouver] to drive it on the highway in the hopes of selling to locals who really don't want to support anyone but locals right now. It's fallacious and kind of a red herring," he said.

By and large, Whistler has lagged behind the bustling street-food scenes in cities and tourist hubs around the world. Permitted at the Whistler Farmers' Market, where Klein and his wife have operated for years, the RMOW launched a program in 2016 that sees a rotating handful of trucks allowed to operate in one of two parks (with a third serving as an alternate) on select days over a span of two months in the summer. Some operators have said the program sometimes isn't worth the cost to participate, especially for trucks that have to commute, and nearly all vendors Pique has spoken with previously have lobbied for trucks to be allowed in the village.

This speaks to the RMOW's other chief concern around food trucks: the potential impact on brick-and-mortar restaurants, which has only been exacerbated by the devastating economic fallout of COVID-19.

"That's the big hurdle here," said Coun. John Grills, who has years of experience in retail and restaurants, when reached by phone. "Our focus is, and there's been a lot of energy put towards the recovery of our community businesses: retail, food and beverage, everybody, so that's our core responsibility right now."

The RMOW's opposition hasn't stopped Klein from holding block parties—in fact, he argues that such a use should be allowed under the catering licence he holds along with his food-truck permit.

"How do catering parties typically get paid for? I would argue, in my experience, that they get paid for by not just one individual, but many individuals: family members, friends of the party. But they're typically in more classical types of catering," he said, questioning how him parking in someone's driveway to sell pre-ordered pizza is any different from a group splitting the cost of a backyard barbecue or dinner party. "We're seeing a need in the community, a need not only to feed our food bank and creating an avenue where we can feed people that can't afford food and doing it with the support of the community, but we're also just trying—like everyone else—to survive this."