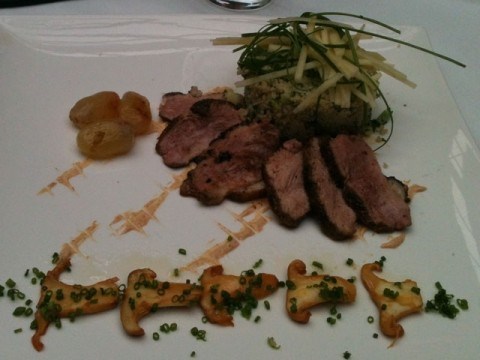 Two Whistler chefs are $2,000 wealthier and playing with some new Viking kitchen products after taking the 2011 title of Whistler Chef's Challenge champs.

The pair faced off in the first heat of the competition against Whistler Cooks. The second heat of the day featured a team from Araxis against the Four Seasons.

The pressure was on for all four teams to prepare their three dishes in the short window in front of a live audience while hosts Edison Mays and Nicole Fitzgerald weaved their way in and out of the kitchen stadium trying to pry information out of the culinary experts.

The judging panel was made up of meteorologist Kristi Gordon from Global TV, Alexandra Gill from the Globe and Mail and myself.

After scoring the teams on presentation, originality and taste Mayer and Gissinger narrowly pulled out the win in a tight set of final scores.