How a short film about a weed-smoking Jesus evolved into an annual festival with an audience of over 1,000
Oct 15, 2010 8:38 AM By: Holly Fraughton 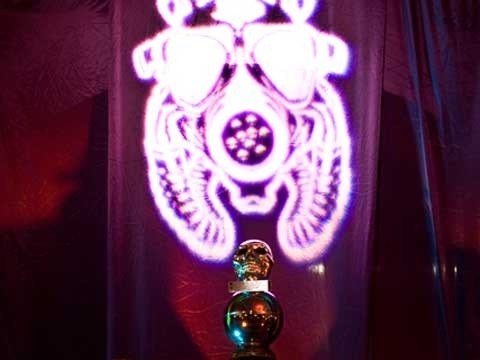 The trick-or-treaters might be making the rounds on a Sunday night this year, but the true Halloween haunting is going down the night before, on Saturday, Oct. 30, when the beloved annual B-Grade Horror Fest unveils the latest and greatest of their short film creepy creations.

But what are the real roots of this popular homegrown film festival? Well, it can all be traced back to 2002 and Pique 's own film critic, Feet Banks, and his friend and fellow filmmaker, Chili Thom. Feet had wrapped work on a ski film called Parental Advisory, and they realized they had all this camera equipment at their disposal.

"We were sitting around talking about a Superhero Weedsmoking Green Jesus and (Chili) was the one who said, 'Let's make this movie, and have a festival to show it and whoever else wants to make a movie can show theirs, too,'" Banks recalled.

"And the rest is history, but the initial concept was his. It started out as something to do for fun with our friends and it still is that today, we just have more friends."

They made their film about the ganja-loving saviour, but quickly realized they had nowhere to show it to people. So they decided to host a screening at the GLC on Halloween, spreading the word for others to make their own films. The concept was a hit even in that first year, with nine original films screened.

Now, B-Grade Horror is a special genre of horror.

"It's just obviously second-rate," Banks laughed. "It goes back to the old days where they would be showing double-features in drive-ins and people were knocking off these cheap movies, like It Came From The Lagoon or Giant Martian Women or anything like that. They were just knocking off these cheap pictures so that they could have films to show at the drive-ins, at the two-for-one theatres, and they weren't using A-list actors and they had very limited budgets."

So, the name of the game was quantity, not quality.

"As with anything, the people that are kind of working under the radar are a lot of the times doing the innovative stuff because they can't just throw money at their problems."

But as Banks points out, some accomplished actors and directors got their start in the genre.

"Jack Nicholson was in an old Roger Corman movie before he did anything, or Johnny Depp was in Friday the Thirteenth. Peter Jackson's first movie was called Bad Taste and it's about aliens who come down and eat peoples' brains, and then he made Dead Alive, which is where people are killing zombies with lawnmowers," he paused. "All kinds of these talented, talented people started off (in b-grade). James Cameron, the first movie he directed was Piranha 2."

"So, with low expectations comes greatness, I think. When there is no bar, you can do whatever you want, and that's where genius is allowed the freedom to shine."

The organizers are, however, occasionally surprised by the quality of some of the submissions.

"When we first started out, we were constantly surprised at how every year, people were stepping up and stepping up. And it still goes that way. The locals all get better every year."

And in recent years, they've begun receiving submissions from serious filmmakers around the country. But usually, they don't quite get what the B-Grade crowd is looking for.

"The guy with the slickest looking movie last year almost got booed out of the theatre because it was too much talking, too much storytelling, not enough blood, guts and awesomeness. So it's definitely a tough crowd. The B-Grade Horror Fest crowd, they don't want epiphanies. You can sneak those in there if you know what you're doing, but they tear people apart that come from a real filmmaking past or that have big crews and expensive films.

"I don't think you could pull this festival off in most other towns, because even though we have had people who have gone on and are serious about their filmmaking career, a lot of the filmmakers are doing it just for fun...

"So if you're doing it just for fun - which most of the Whistler filmmakers are - then that makes it kind of special."

In the process, the founders have also discovered that people are actually pretty twisted; hence the 19+ age restriction tied to the event.

"Our only rules are with the length and to not steal people's music. And as far as content, it's been carte blanche - and it's weird because you give people that freedom year in and year out and it seems like it's the sexual deviancy stuff that really gets pushed, not the violence, not the gore!"

Banks expects 12 to 14 submissions for this year's festival. And provided all the filmmakers stuck to the 10-minute time limit, they should have time to show them all. As of late last week, he hadn't seen any of the completed films, but was intrigued by Killer Pussy, a project by a newcomer to the event.

"All she told me was the title, and that's a huge step in the right direction, as far as this crowd goes!"

A panel of local industry experts will judge submissions based on story, production value, sound, music and overall "horrorificness." The winner will walk away with the silver skull trophy (a.k.a. the Stanley Cup of Horror), plus killer prize packs from Big White and Silver Star, as well as industry passes to the Whistler Film Festival.

The festival really blew up in a big way last year, as Heavy Hitting (Banks and Thom) joined forces with Whistler Creek Productions, got the Fairmont Chateau Whistler onboard and quadrupled their capacity. Now, as the event enters its ninth year, the momentum continues to build, as organizers are expecting over 1,000 costumed horror lovers to flock to the Fairmont's Macdonald ballroom to get their yearly fill of fake blood and sub-par acting.

And according to a posting on their Facebook event page, as of Monday afternoon there were just 130 tickets left. So if you're interested in attending, visit www.heavyhitting.com and look for the B-Grade link to get your tickets, ASAP.