The Creepshow comes to town with their eclectic blend of psychobilly rock and over-the-top live performance
Aug 29, 2008 9:25 AM By: Holly Fraughton 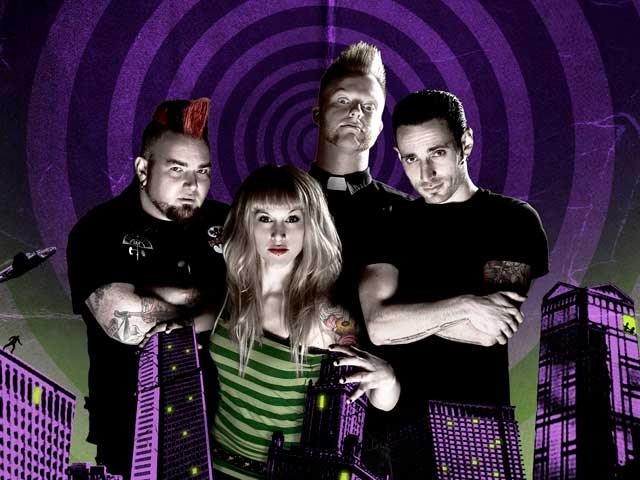 Just Rock Expect quite the show from the lady and gentlemen of The Creepshow. They're coming to Whistler again, playing a show at the GLC this weekend.

Eccentric haircuts, a love of black clothing, and some serious tattoos; on paper, The Creepshow sounds like your average rock band. But in person, they’re a force to be reckoned with, and one that defies stereotype.

Sean “Sick Boi” McNab on upright bass and vocals, Sarah “Sin” Blackwood on guitar and vocals, Reverend McGinty “Ginty” on keys and vocals, and Matt “Pomade” Gee on drums are the men and women behind Creepshow’s music. While a lot of terms are thrown around in an attempt to describe their combination of sound and image — psychobilly and hillbilly are probably most common — McNab is hesitant to pick just one word to define the quartet.

“Whenever anyone asks, I just say we’re a rock and roll band,” he said. “I don’t think we’re psychobilly or anything like that — like we definitely take elements from the kind of music, but we don’t want to get pigeonholed in one specific genre, because we’re all over the place.”

The genre of psychobilly rock first emerged in Europe in the ’80s, but didn’t make its way to North America until the late ’90s. It combines elements of punk rock and other genres, and usually makes lyrical reference to sci-fi and horror culture. Instrumentally, an upright double bass often takes the place of the usual electric bass of modern rock. In those respects, The Creepshow definitely fits the psychobilly bill. But their musical influences are very diverse, ranging from performers like Johnny Cash to The Cramps and The Stray Cats. A strong punk energy also comes across quite clearly in their music, whether it’s live or recorded.

“Anything that’s badass but still has good melody,” McNab explained, adding that he grew up on a steady diet of Dead Kennedys, The Clash, and Social Distortion.

Their music has been well received in Europe, as well, because the genre is more established on the other side of the Atlantic.

“There are bands that have been doing it for like 25 years that are still going strong, and here, it’s a lot newer,” McNab explained.

So while it’s harder to impress the European crowds, McNab points out that there’s more of a following than here in Canada.

Their unconventional image has raised a few eyebrows with unsuspecting Canadian crowds, but McNab said they enjoy playing for audiences that aren’t familiar with their music.

“Having a standup bass and looking the way we do, I guess we turn heads when we play with bands that we don’t sound like,” McNab said with a chuckle. “People will be like, ‘whoa, what is this? I gotta check this out, this is going to be weird or crazy.’

“But we really like playing for crowds like that because we seem to be winning them over,” McNab said. The band recently played at a Metalfest in Windsor, Ontario where they stuck out from the rest of the performers. But they ended up headlining and having an amazing time, playing alongside Rancid.

The Creepshow first came together in 2005, when McNab and Jen Blackwood started writing music together. Things were flowing so well that they decided to recruit Ginty, an old friend who played in a local ska band, to collaborate. Finally, they turned to the Internet to find the last member of the group, drummer Gee. All had previously played in garage bands in Ontario, with McNab himself touring for the past 12 years with different bands as musician and tour manager.

And even in the few short years since they started out, The Creepshow has taken off, despite the band’s lack of expectation and ambition.

“When we first started, I had kind of quit,” McNab admitted. “I was like, I’m done touring and I just want to get a job and play on weekends for free beer and have fun again. Then it just started to happen.”

They started getting calls from labels and were approached to tour.

But the lineup was switched up significantly last year, when Blackwood left to have a baby. The transition was relatively smooth, with her younger sister, Sarah, stepping up to fill her spot.

Lyrically, their music is inspired by horror culture, as they’re all big horror fans — Reanimator , the original Texas Chainsaw Massacre and Nightmare on Elm Street top their list of fave flicks.

But their new album, Run For Your Life , isn’t as influenced by traditional horror culture, per se, as their first, Sell Your Soul. Rather, McNab explained that they’ve collaborated more on the lyrics and embellished on personal stories, personifying objects with sinister undertones.

“Jen’s lyrics were really in your face — zombies, ghouls, goblins kind of thing,” he said. “In one song, that song Run For Your Life is actually an anti-cocaine song, but we kind of took cocaine and personified it as a demon.”

When they heard the finished product, even the members of the band were surprised by its unexpectedly heavier sound.

“I didn’t really know. We were done it and I was just like, ‘whoa, there it is! I like it, let’s see what happens,’” McNab said.

And during their live performances there’s a lot more than the music to capture the audience’s attention — expect a full theatrical performance from these high-energy entertainers.

“Our live show is super important to us. We spend a lot of time — probably just as much time as we spend on writing the songs,” McNab said. “There are so many times you go see a band that you haven’t seen yet that you love, then you watch them and you’re like, ‘wow, that was boring as hell’… We try and make it the opposite.”

Run For Your Life was released in Canada on Aug. 26 and will be released at the end of September in Europe.

The Creepshow returns to rock-out with Los Furios in Whistler on Saturday night.