A Fish Out of Water no more

Grunwald grows from blues base, entrenches himself in upbeat rock and electronic influences
Sep 4, 2009 8:00 AM By: Holly Fraughton 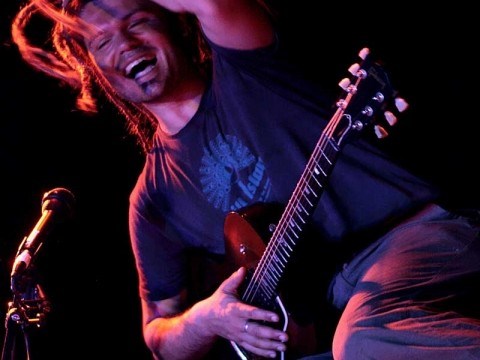 This weekend, the walls of the GLC will be shaking with the ever-present bass and reverb that follows bluesman Ash Grunwald from gig to gig. But this certainly isn't the musician's first stop in Whistler.

"I just want to keep in peoples' minds and hopefully build something up pretty strong in Canada in a couple of years," he said during a recent telephone interview.

Grunwald is currently on yet another West Coast tour of Canada and was in Banff on Tuesday morning, getting ready to come back to Whistler for another show after playing here just two weeks ago for Mountain West Music Festival. This was the first time the musician had visited the West Coast of Canada during the summer months.

"It was pretty bizarre to see just how different it is between winter and summer," he said. "...I just came from a month in England and, as much as I love the people, the summer is just so hard to deal with."

"I guess that the themes that are in my music are sort of pretty readily applicable to people in snow towns and whatnot," he mused. "I'll be recording my fifth album soon and it's just funny sometimes I think that every single song in some way is always about questioning life and questioning the nine to five grind and basically just inventing excuses to just have fun and do your thing and live for the now."

"I think people who love living life to the fullest and travel a lot and like to see different things and whatnot can relate to my sort of stuff," he added. "And also, its party music!"

Grunwald first picked up a guitar at the age of 10, and by the age of 13, was a budding bluesman, thanks to the heavy bass influence of his grandfather. Soon, he became obsessed with the 12-bar blues stylings of artists like Buddy Guy, Albert King and Muddy Waters. Then, a few jam sessions with a friend led him to try and combine electronic music with his mainstay blues.

He made his live performance debut while in his 20s and living in Melbourne. It wasn't long before he was performing in duos and doing solo and acoustic shows all over town. He then began expanding to other corners of Australia and eventually put together his first album, Introducing , which featured traditional blues tracks.

As he's continued to tour, his fan base has grown, as has his confidence. He's gradually started getting more adventurous with his sound, including sampling and live looping on his albums, playing lap steel in his live shows and even cultivating his own beats that meld well with the existing elements of groove and guitar.

To date, he's shared the stage with legendary performers like James Brown and Bo Diddley, and traveled around the world. It's also helped introduce him to a world of things that he had never experienced before.

"I'd never really been to the snow at all until I played music and just through gigging that we've done, we've sort of gone up in Australia to the snowfields over about seven or eight years and I've become a really, really keen snowboarder," he said.

Though the album actually came out early last year, he's currently touring to promote Fish Out of Water . But that project was actually a unique experience for Grunwald, a leap towards the creative vision he's had since he started out in the music industry almost 10 years ago.

The album came out of a special workshop with Mushroom Publishing, which saw Grunwald working with a well-known Australian beatmaker, Countbounce, in a mansion in the Macedon Ranges of Victoria, Australia. There, the two songwriters worked together to write and record one new song per day.

"To actually collaborate, there was a lot of letting go, but it's just so much easier to be creative when you're bouncing off someone," Grunwald said.

This collaborative process was quite different from anything the solo musician had experienced before. It helped encourage Grunwald to explore different aspects of his music, fusing elements of electronic, hip hop and psychedelic rock with his traditional blues.

"I wanted to use his beats, because he programmed all the drums and stuff, so I wanted to go in that beats-based direction..." Grunwald explained.

While he'd started playing around with sampling and live looping on his I Don't Believe album, he's now gained more confidence experimenting with other genres of music besides blues.

"I really do love having a hip hop foundation and that style of recording and mixing that with blues - that's kind of my dream," he said. "It's always sort of been my dream to combine those two things in a soulful kind of way that really works."

Grunwald has played around with beats before, but often, simply created a mash-up of his own electronic beats with his blues tracks placed on top. This time around, he  co-wrote five tracks on the album with Countbounce, spending several months last year demoing tracks in a shipping container in Countbounce's backyard, which doubles as a recording studio.

He's already planning on again taking a similar collaborative approach on his next album, inviting more artists to work with him.

"Mentally, I'm sort of getting ready to make an album, which is a tough thing for a long time because it's a really bizarre pressure you have as a musician, you know. Once 18 months goes past, you definitely have to be ready to do another album, but with that one ( Fish Out of Water ) I just sort of put everything I had into it."

He explained that it can be mentally and creatively exhausting to start the whole process of writing, developing, recording and completing an album.

"It's like at school, when you have homework, and you haven't done it and you sort of feel bad, but very much worse than that," he said with a chuckle. But making music is still very much an enjoyable process for him.

"I just pinch myself at those times, actually, when I go, 'I'll go do some 'work' and then I just go muck around with beats and do some recording."