A gift to a new home

Celebrated Polish photographer introduces himself to Whistler with exhibit
Mar 10, 2006 7:36 AM By: Nicole Fitzgerald 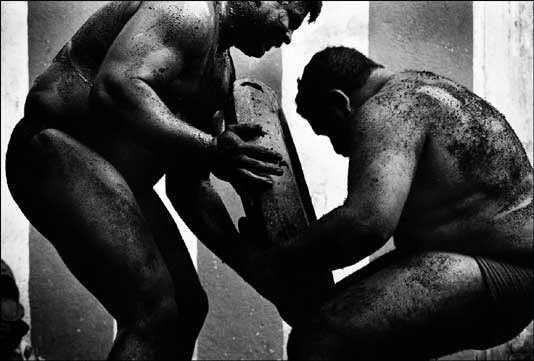 "The photos documented something that was lost in an eye’s blink." - photographer Tomasz Gudzowaty

Susan Sontag, author of On Photography, wrote, "Photographed images do not seem to be statements about the world so much as pieces of it."

New residents to Whistler, award-winning Polish photographer Tomasz Gudzowaty and his partner and fellow photojournalist Judit Berekai, wish to introduce themselves and share pieces of their life’s work with the Whistler community at a special showing created for their new mountain town. Entitled Three Sports Stories, the photography exhibit is showing for the month of March, with an artist opening reception this Friday, March 10 at MY Millennium Place.

Gudzowaty, a five-time World Press Photo Award winner whose credits include a showing for the 60 th anniversary commemoration of the founding of the United Nations in New York, is eager to become a part of what he calls an "unspoiled social environment" and "authentic local community" here in Whistler.

"This is a very special place on Earth, and I can tell you that as a person who has traveled to all continents, except the Antarctic," Gudzowaty shared in his native tongue, translated by friend Tomasz Lewandowski.

"Every artist needs a place to call home: a quiet, welcoming place where your art and spirit will thrive…. Whistler is an authentic local community, busy with its own concerns, but generous and definitely not egotistic – respectful of traditional values, yet open-minded and modern. I think that open-mindedness, freedom from prejudices, is a feature of Canadian society in general. Sounds like a Utopia doesn’t it? But we are completely impressed with this town."

"The common denominator is sport, but more as a spiritual and physical exercise, a part of a larger cultural system, as a way of life," Gudzowaty said.

Documenting isolated cultures is the driving force behind Gudzowaty’s lens. He used the example of how he was able to capture the pole fisherman of Sri Lanka only a few months before all was washed away in the 2004 tsunami.

"The photos documented something that was lost in an eye’s blink," he said. "Ancient traditions are turned into notoriously commercial practices, losing their sense. They become tourist attractions or they die. In the Indian city of Mysore, where we photographed the wrestlers, there are only a few traditional wrestling clubs from about 70 that existed over the past century. I am not sure if one will survive the next few years."

Pieces will at least survive in Gudzowaty and Berekai’s images.

"By this creative intimacy, we would like to contribute to Whistler’s life – on the occasion of this exhibition and in the future," Gudzowaty said.

The showing is sponsored by Yours Asia Corporation, Gottschalk Design and Ann Chiasson and Ted Morden of RE/MAX Sea to Sky Real Estate.