Whistler Stories grant program gives local filmmakers a chance to step up their filmmaking talents
Dec 1, 2006 1:17 AM By: Nicole Fitzgerald 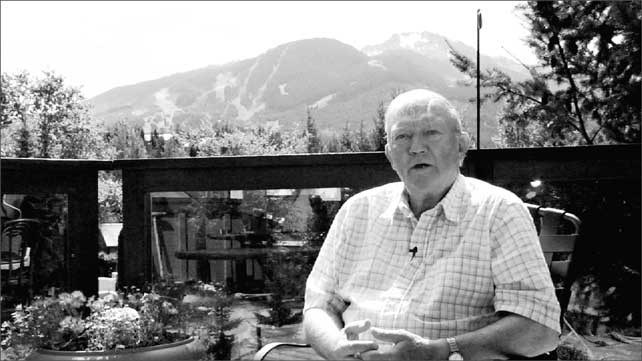 "It all just didn’t happen out of thin air. The film pays tribute to those who planned." - filmmaker Brian Hockenstein on making Whistler Stories, photo submitted

Like so many other filmmakers in Whistler, Brian Hockenstein entered the standard round of filmmaking events in Whistler — the Telus World Ski and Snowboard Festival’s 72-hour Filmmaker Showdown and Heavy Hitting Film’s B Grade Horror Fest.

He worked for local stations: Resort TV and the now defunct Whistler Cable 6.

But when he sat down at last year’s Whistler Film Festival screening of Whistler Stories, he was presented with the opportunity to raise the bar on his talents and funding to back his creative vision.

“There are a lot of filmmakers in Whistler who participate in film at a do-it-yourself level,” said Bill Evans, Whistler Film Festival programmer. “We thought, ‘What would happen if we were able to mount a program where we give these people a budget and instead of doing it with their friends, they could hire a crew and could create something more professional, but at the same time maintain Whistler’s creative attitude?’ Whistler Stories gives filmmakers the opportunity to move up their filmmaking to the next level.”

Hockenstein is one of four local filmmakers participating in the Whistler Stories filmmaker-commissioning program. His film, Whistler: An Olympic Story, will share the stories of four founding community members at the festival’s opening gala Thursday, Nov. 30 at 8 p.m. at the Telus Conference Centre. Whistler Stories will also show at a free outdoor screening Friday, Dec. 1 at 5 p.m. in Skier’s Plaza.

Whistler Stories awards four $5,000 grants a year to filmmaking teams who each produce a five-minute short film. The program, based on Olympic themes such as sports and arts, leads up to a final collective screening at the 2010 Winter Olympic Games.

Hockenstein is extremely excited to share the making-of-Whistler story, dating back to 1960 when a group of visionaries made their first application to host the Winter Olympics.

“It’s a fun and interesting story about a bunch of people having an idea and accomplishing it beyond their wildest dreams,” he said. “I just thought it was really cool how they had an idea and got it done despite obstacles: there was no highway, no infrastructure. They put a lot of effort into planning. It all just didn’t happen out of thin air. The film pays tribute to those who planned.”

Two previous films he created for the Whistler Museum and Archives Celebration 2010 program, also called Whistler Stories, inspired the film. Each year, leading up to the 2010 Games, a film looks at a different demographic of Whistler and how they feel about the Olympics.

“I worked with the museum and had a chance to interview old timers having to do with Whistler and I thought it was a good fit,” he said.

Hockenstein plans to expand the five-minute short into a one-hour film, adding additional research and footage in the coming year.

Other Whistler Stories include The Heart of Whistler, by Ken Hegan, Normal, by Beau and Dustin Blanche, and Eating Yourself Local, by Andrea Wing.

Tickets for the opening gala, which includes a screening of Let It Ride!, are $25. The outdoor screening is free.