Performance marries comedy and illusion in a single evening of entertainment
Feb 27, 2009 7:36 AM By: Holly Fraughton 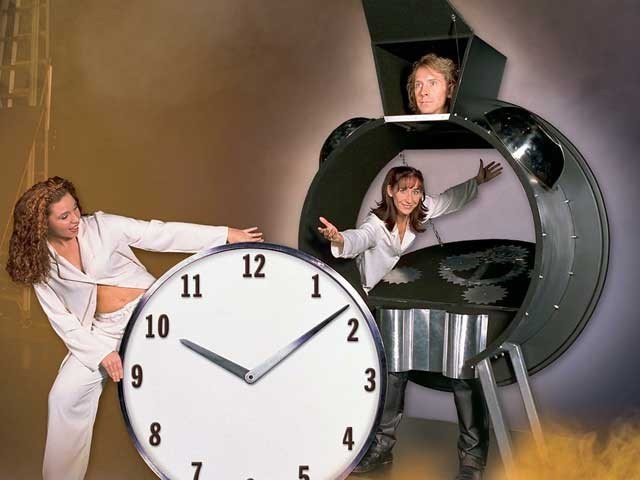 Tick, Tock A seven-foot alarm clock is just one of the many elaborate props included in Outerbridge’s Magical Moments in Time performance.

It's a rare profession, and certainly not a high school guidance councilor's standard suggestion for a career, but the world of magic and illusion has proven to be quite a successful path for Ted Outerbridge.

Today, Outerbridge has the biggest illusion show in the country, has toured across the country with his act, and has been nominated for Touring Artist of the Year by the B.C.
Touring Council. His Magical Moments in Time performance has even been featured on MuchMusic, Mystery Hunters and The Discovery Channel, and repeat appearances at the Just For Laughs Comedy Festival.

"It's definitely a different career choice," he admitted.

He's been performing full-time since 1983. So, for 26 years, Outerbridge has been amazing audiences with dramatic, jaw-dropping illusions.

"In the business, we call 'illusionists' people that do larger illusions involving people, usually, and a 'magician' is usually someone who does smaller tricks," Outerbridge explained.

But his shows aren't simply a series of tricks - there's an underlying storyline to Magical Moments in Time, including characters, skits, and, of course, tricks.

"The show is a celebration of moments in time that the whole audience can connect with," Outerbridge explained, "... It's not just magic tricks off the shelf, either."
The magical seed was planted when Outerbridge was just seven years old.

"The first magic show I remember, I was probably about seven when I saw it," he recalled, "And this man did amazing things ... I experienced wonder and I wanted to be able to make other people feel the same way I did."

A young Outerbridge started out doing simple magic tricks, but soon realized that if was really going to wow people, he needed to take things to the next level. He began hanging out at the local magic store, attending all the magic shows he could, and checking out every magic book at the local library to help hone his skills.

"I remember I learned a rope trick and I fooled my father with this rope trick, so that was a huge moment in my career," he recalled.

By the time he was 12 years old, he had assembled a show for a birthday party, billing himself as "Magic Ted" and charging $3.50 for his performance.

"That was the beginning of the magic business," he said, "...Then my price skyrocketed to $5 and it just kept on going."

At the age of 19, he snagged a job at the local magic store, where he truly began his study of the trade.

"There's not really a school you go to that makes you an instant magician," Outerbridge pointed out, "It's more of real-life experiences."

Apparently, the country's magic scene is thriving, with hundreds of amateur magicians in the province of Quebec alone.

"We have magic conventions where you get a few hundred magicians together and we have lectures and performers from out of town come in," Outerbridge explained.

Over the years, Outerbridge has discovered a wide range of applications for his magical skills, as well. Aside from his many performances at theatres, casinos, and cruise ships, he has landed consulting work for the Cirque de Soleil and movies, and has even designed impressive illusions for companies.

"At one point I was focusing on corporate work and custom designing illusions for companies, so I made a motorcycle appear for Yamaha, and I made giant display units of razorblades appear for Gillette, so that was fun, because it allowed me to be creative and take standards tricks and reinvent them," he said.

Today, his four-person team includes a lighting director, crew chief and his wife, Marion, who he actually met through the world of magic and illusion.

"I hired Marion to work as a dancer in the show ten years ago, and I very quickly started to cruise her," he said with a chuckle.

He doesn't skip a beat when asked if he's ever sawed her in half, either.

"I did this morning, actually, on Breakfast Television here in Edmonton" he said, "I divide her in half, and I do it with two spectators holding her head and legs, so there's people surrounding us while we're doing it ... the spectators that are there are usually more amazed than the audience."

While the dividing bit usually blows the audience away, Outerbridge's vanishing and reappearing trick usually stirs the crowd up, and his slight of hand tricks are always a hit, as well.

This will be the group's first visit to Whistler, and they're looking forward to the upcoming performance.

"I really love traveling across Canada and I love meeting new people and performing in new places, whether it be a big city or a little town - that doesn't really matter," Outerbridge said, "But I like that every day is different and it's a very interactive show - the show is all about the audience - so no two shows are the same."