A second life for Whistler Live!

More arts, culture and concerts in store for Paralympics, starting March 12
Mar 5, 2010 5:45 AM By: Holly Fraughton 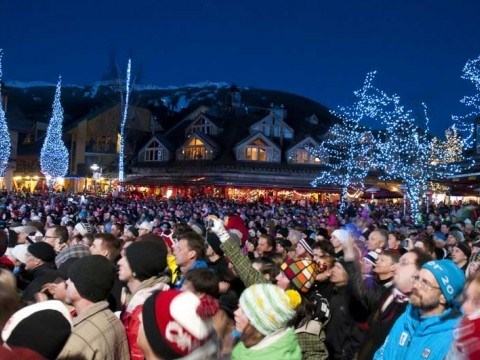 Just when you thought the party was over and it was finally safe to sleep without missing any of the action, Whistler Live! organizers have announced another round of concerts coming up for the Paralympic Games.

"If you had the opportunity of enjoying Whistler Live! during the Olympic period, we do believe we put on a remarkable show, choosing a wonderful fusion of arts, culture, entertainment of sport," John Rae, executive director of Whistler Live! said during a press conference last Friday.

He feels they've been successful in creating the "one foot in the stadium" experience along Village Stroll using 14 massive televisions to coordinate live feeds of sporting events with concerts, athlete interviews and much more. And during the Paralympic Games, very little will change, as Whistler Live! will remain essentially as-is, with six integrated live sites along the stroll in tact, for the most part.

"Whistler Live! will be exactly the same exhilarating, inspirational experience during the Paralympics that we believe it has been during the Olympics," Rae said.

"The party isn't over..." Rae added. "Everything that's happened during the Olympics, that's going to be sustained during the Paralympics."

Town Plaza will be slightly scaled down to feature street performers stretching down to Medals Plaza, while the Fire & Ice Remix will be held at the base of Whistler Mountain every night except during the opening and closing ceremonies. At Mountain Square, the International Paralympic Committee (IPC) is installing a special "Spirit in Motion" exhibition, and at Village Commons, home of the Whistler Live! studio, things will remain the same.

The Village Square Stage is also staying put and will play host to more free, unticketed performances per day than it did during the Olympic Games, with three live après shows per day.

"That's more live performances per day than during the Olympic Games," Rae pointed out.

The lineup is broad and diverse, covering the spectrum of everything from indie rock to blues. Highlights from the final lineup, which was released Thursday, March 4, include 54:40, Alpha Yaya Diallo, Bitterly Divine, Hey Ocean!, Spirit of the West, The Sadies and Thornley. Of course, organizers have also included local talent like Whole Lotta Led, Still Smokin', Route 99, Brother Twang and Papa Josh.

"So again, a great fusion and integration of local performances as well as well-known artists from around the region and the province," Rae said.

Things may have gotten off to a bit of a rocky start with some bad weather and a disrupted broadcast of the Olympic opening ceremonies, but after that, the Whistler Live! experience was essentially smooth sailing.

"Its been phenomenal and exceeded all expectations," said Kristen Robinson, festival director for Whistler Live!.

A long-time Whistler resident, Robinson added that she has never seen as many people together in the village as gathered to watch the Barenaked Ladies, Sam Roberts and Damian Marley.

"I have the great fortune of being able to watch from the stages, so I see the faces and to see those expressions on the young children and the athletes and the flags and the patriotism and how international it is..." she trailed off. "It's a phenomenal, once-in-a-lifetime experience."

Robinson has also been getting a great response from the artists who have performed at Village Square, almost all of whom have commented on the great, positive crowds that came out to enjoy their shows.

"It's something that's in our DNA here in Whistler, the fusion of sport, art and entertainment," Robinson said.

She added that they've taken things to another level with the addition of the fibreoptic technology and the partnership with CTV.

"From many broadcasters, we've gotten compliments that we have a better show than they do!" Robinson laughed.

Access to Medals Plaza will again be free, but limited to 5,000 people per night, with ticket distribution working the same as it did for the Olympic concerts.

Who's playing the Paralympics?

Luke Doucet and the White Falcon

She Stole My Beer

Spirit of the West