A show snowmen would love 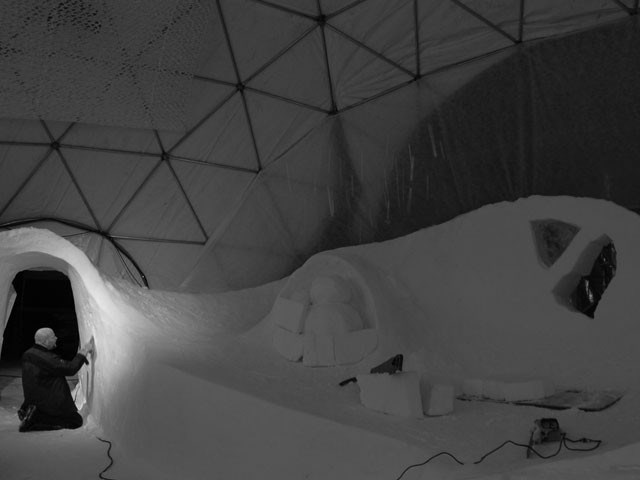 Snow and ice come together with drama to make magic in Canada’s first ever snow and ice theatre where The Only Animal Theatre troupe will perform NiX on Feb. 23 in Lost Lake Park.

The lure of snow and ice theatre performance, where audiences either need to snowshoe or cross country ski to reach the theatre, is overwhelming with the one-night-only performance selling out last week as part of the 2008 Cultural Olympiad.

However, audiences can still bundle up, snap into their snow shoes and lug along a thermos of hot chocolate to trek out to see the free dress rehearsals taking place on Thursday, Feb. 21 and Friday, Feb. 22 from 6 p.m. to 8 p.m. at Lost Lake.

“We are interested in the theatrical potential of snow and ice,” said director and writer Kendra Fanconi. “The way it beautifully reflects light, the feeling of being huddled in a snow cave, sitting in ice to stay to hear about a tale of survival: these are all reasons why this performance is so unique.”

NiX, which means snow in Latin and nothing in German, is a fairytale about the end of the world.

“It takes place when a freak ice age comes into the world,” said Fanconi, who is also The Only Animal’s co-artistic director. “Ten survivors find each other and one arsonist.”

This frozen wasteland isn’t quite what the arsonist expected for the end of civilization. Both humour and heart freeze themselves into Fanconi’s script.

“The story is looking at emotionally what it means to go from a frozen state to the thaw of the heart,” she said. “It looks at having the opportunity and chance to have a blank slate for society. It’s a very playful take on starting over.”

Who would have ever thought someone would actually take them up on their resume touting their ability to withstand sub-zero temperatures while reciting Hamlet’s “to be or not to be” soliloquy. Rumour has it, they held auditions in a freezer.

“The challenge of this crazy medium of ice and snow, so beautiful and theatrical, is combining it with actors who are suspetable to the cold. We had to build costumes that would keep them warm and dry, but still look vulnerable,” said Fanconi.

While crews have been working 12-hour days to keep this dream from melting, actors can only withstand eight hours of the frozen set up.

The Whistler production is a workshop trial run of the show. The team first developed the project in 2005 in the frozen white of William’s Lake, experimenting with snow, ice and light.

“We took the biggest riskiest ideas and tested them all out here,” she said.

Next year, NiX will officially premier in Calgary in 2009 and then will return to Whistler for 2010.