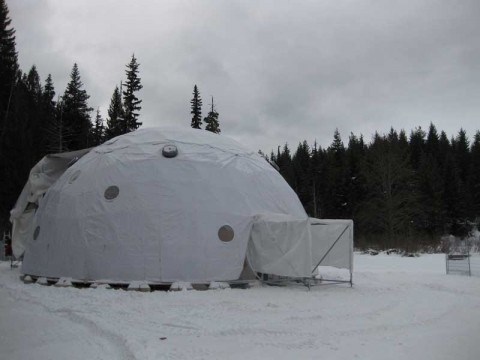 While skiers and snowboarders have been eyeing the skies looking out for the next big dump of snow, there's another group of visitors who are just as anxious about Ullr's mood.

Snow sculptor Carl Schlicting and his team arrived in Whistler last week to begin building the stage of ice and snow for the Olympic performance of NiX along the shore of Lost Lake. By Friday morning, Mother Nature had been kind to the crew, offering up a bounty of snow and nice, cold conditions. But the weekend forecast was not so favourable, calling for rain and warmer temperatures.

Mid-afternoon, rain had just started to fall on the site.

"It's nice for building, it's perfect, because you can just get a tighter pack," he explained with a shrug.

A little bit of rain isn't enough to dampen this crew's spirits. This is the third time they've created the NiX set - once was a few years ago here in Whistler, when the performance was first being workshopped, and the second time was last year at the outdoor rink at Olympic Plaza in Calgary, when the production had it's first full, five-week run.

As Schlicting describes it, that Calgary debut was a "nightmare."

"In Calgary, we had days of plus-10 and you just prayed by show time that it was going to be colder, and it almost always was."

On top of the wildly fluctuating temperatures, the crew was working with "shitty" snow plowed into a rink from a parking lot, so they had to over veneer the entire set with thin slabs of clean, white snow, all while protecting the ice components of the set from warm daytime temperatures with insulated tarps.

"The re-setters had to do these very thin skins over top of the sets that were hidden. That was a challenge, because once you cut snow down to an inch and a half thickness, if its warm, it has no strength."

To top things off, for the first time in 20 years, the rink actually malfunctioned and melted.

"Calgary went nuts with not only meltdowns, but serious deep freezes," he chuckled, gazing skyward.

The troubles didn't stop even when the production was finished. When it was time to pack up, the crew went to extract the structural equipment, wiring and lighting fixtures buried beneath the snow, but they had been solidly frozen in place by a sudden deep freeze.

Now, Schlicting and his crew are hoping to work with the many lessons they learned in Calgary and pull off the second run of NiX without a hitch.

By Friday, the 44-foot geodesic dome that will house the audience seating area and staging was already in place, protecting the harvested ice and snow from the threat of sun. Schlicting was preparing to start the carving process. Crew members were busily shoveling snow into a large wooden box, then compacting it down with their feet - almost like crushing grapes. The giant blocks of compacted snow will be used to "reset" the stage every night, a process that takes almost four hours.

They've also harvested almost three tonnes of ice from Alta Lake, chopping out large blocks with a chainsaw. That ice will be used to create a large curved slide, which is lit up with LED lights, for actors to slide down.

They were aiming to have the set ready for the cast, who were scheduled to arrive on Tuesday to begin rehearsals.

"Snow medium has two components: there's the snow, which has many characteristics as any skier or person aware of avalanche can tell you, and then there's weather," Schlicting explained. "It's all about temperature, and the colder it is, the more you can do with it."

Even with perfect snow, a change in weather to warmer temperatures or damp conditions can wreak havoc on a project. (The ideal temperature is zero or below.) Snow sculptors, therefore, need to learn to mitigate troublesome factors.

"There is a lag time - snow insulates, so in a set like this," he said, gesturing to the dome, "say six foot in, will retain the temperature and you can have a big warm day or two and we're still okay. It's once that warm gets into the snow and goes up, then it all starts to get mushy."

Schlicting admits he was concerned about conditions before he arrived, and was hoping to extract slabs that had two to three inches of clear and white ice. A grin lights up his wind-chapped face as he describes the thick pieces they found, instead.

"You can't buy blocks like this!" he said, gesturing proudly to the ice blocks.

While he was a bit worried about not having enough snow harvested yet, a municipal snow cat has been on-site occasionally helping to push fresh, pristine snow from the frozen surface of Lost Lake onto their site.

Snow sculpting seems to be a very technical, scientific process and one that certainly isn't taught at any formal educational institution. Rather, Schlicting has honed his skills through trial and error.

"It's hands on," Schlicting grinned. "It's all about the experience that you have doing more and more challenging things as far as how far you can push the medium and how much you can add to and build on and hang off of it."

A self-described "prairie boy," Schlicting was always inspired by snow as an artistic medium and ended up studying Fine Arts before going on to a 25-year career working with museum technology. But about 10 years ago, his interest in snow sculpture was piqued again.

"That's the thing: for a sculptor, its like a practice medium on a monumental scale! I mean, it's like stone carving in a way, but you can't work stone that fast," he said.

"It's the speed at which you can create big sculptures, and there's something about white on white and playing with light and shadow, especially with ice - ice is all about light play."

He knew that the Canadian snow sculpting team was working in the Kootenays, so he approached them and asked to join up, and soon began traveling to competitions and learning the tricks of the trade.

"We've done really well with most of the competitions that we've been in and it's because we just pushed our design ideas!"

Whistlerites may recognize their work from up at the Roundhouse on Whistler Mountain, where they've created snowy sculptures for the past three years, including a replica of the sculpture of Nike which is located in the Louvre.

"That's always really fun, because I love being up at that altitude and it's almost always cold and perfect snow," Schlicting said with a smile.

Working in a snow-rich environment like Whistler also helps with the creative process as, generally, the sculptors have access to plenty of free material.

"That's definitely a plus," he quipped.

More difficult to deal with than Mother Nature is the psychology behind the process.

"We've had so many meltdowns and shitty weather that just getting over that disappointment of not being able to finish your project - we don't care about it melting down!... But to have it being destroyed while you're building it is a pain in the ass."

Building a functional stage for the NiX performance has been an interesting challenge for the experienced snow sculptor.

Kendra Fanconi, the creative director of the theatre company that is staging the NiX performance, found Schlicting through his work with the Canadian Snow Sculpting Team. She asked him to develop his own vision for a stage for their performance - one that considered the actors' technical requirements.

"I was excited because I'm not into competitions as much as I'm into pushing (the medium) into more of an artistic direction, and that's what this is."

It's been a learning process for the experienced sculptor, with Schlicting finely tuning the set with precise slopes and functional aspects for the actors to work with.

"I knew the dome and what the footprint was going to be, and the space we had to work within, and just a very rough idea of the story, and so we went through a couple of different drawings to a much more sculptural concept."

That original vision, which included sculptures that the actors worked around, eventually evolved into a large, open bowl design that features a curved slide, tunnels and windows, and almost 24 dump trucks worth of snow.

While Schlicting won't be on-hand to see the performance staged during the Games - he leaves the project with a team of trained re-setters once the set is built - he is anxious to hear how the site-specific concept is received by the thousands of people who are sure to come out to see it over the five-week run.

"The response is going to be much more interesting than the actual doing and being involved," he said.