A Tried and True Christmas Carol 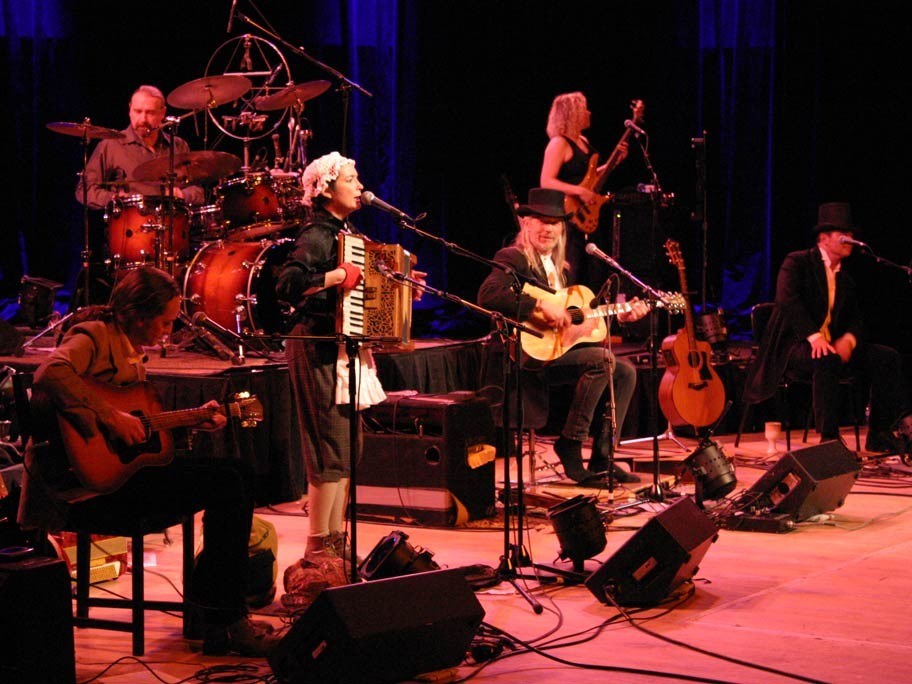 Singing this Carol. The Edmonton-based Christmas Carol Project tells the classic Dickens tale through 23 songs written by all eight of the performers.

It's Christmas time and therefore you cannot escape A Christmas Carol. Nor should you: it single-handedly saved Christmas from the humourless clutches of the Victorian-era Protestant Church. Read about it sometime. If it weren't for Charles Dickens, you might very well be sipping buttermilk in an empty living room, rather than a rum-and-eggnog in a brilliantly lit room full of presents and (hopefully) some family.

Now, if you're looking for a new way to experience the greatest Christmas story ever told (after Home Alone), the Christmas Carol Project is rolling through town for the second year. The musical tells the classic tale through 23 original songs performed through the point of view of each of its characters.

"The story is timeless," says John Armstrong, founder of the CCP. "It's important to us to be presenting something that has a meaning that we agree with, that exemplifies what we believe should be the true spirit of Christmas."

The concert plays like a folk-rock concept album, as if Dickens had written Tommy and infused it with some reggae, Celtic and gospel.

"I came up with the concept and basically broke the story down into song assignments, recruited the musicians and it was up to them to write their own songs from the perspective of their characters," Armstrong says.

Some wrote the lyrics by drawing phrases straight from the text while other players took a bit more creative license.

"Some are a little more interpretive," Armstrong says. "If you heard the song on its own, you might not even recognize that it was from the story, but in other ones they actually sing to Scrooge directly and use his name in the lyrics."

Armstrong conceived the project about 20 years ago as a way to wrangle the disperate styles of music that existed within the Edmonton music scene. He had been acquainted with musicians from each of these factions and he wanted to showcase the best of all the genres in one performance.

"Around that time," he says, "I saw the old Alastair Sim movie, the 1951 Christmas Carol, and it just struck me that that was the perfect vehicle because the characters are so strong and I sort of jotted down some ideas where you could have one musician play Scrooge and another play Cratchit. Of course the Cratchits would have the blues and different genres would be more conducive to the attitudes of the Ghosts of Christmas Past, Present and Future," he says.

He sat on the idea for several years until his good friend Roschkov, who now plays Cratchit, pushed him to start seriously developing the idea.

Sixteen years later, the CCP is still running with the entire original cast. He says the show has remained relatively the same for the past decade. The song list has grown from 19 to 23 songs since its inception, and the arrangement of some of the songs has changed slightly over the years — Bob Cratchit's "Better Way" has morphed from a blues song, into a reggae song while the Ghost of Christmas Present's number has taken on a hip hop flavour.

But the narration between each of the songs, monologues derived from Dickens's text, are reviewed and changed to explore more of the story.

"There's so much in that little book that can't be included in an entire musical, let alone a movie or a televised version. We do change that up."

They recorded their album in 2004 — which will be for sale at the merchandise stand at the venue (Ed. Note: hint, hint). Due to CD time constraints, he says they had to leave out the narration that string's the Project's narrative together, hence the name Songs of the Christmas Carol Project, which includes all 23 songs.

In 2006, they shot a televised version for Bravo!, which they had to slim down again due to time constraints. So while fans can enjoy the tunes while sipping eggnog on Christmas Eve, there's only one way to experience the Project in its entirety: the live show.

So maybe it's time to put down that tasty beverage and buy some tickets — come enjoy the show.

Tickets are $28 for adult, $24 for seniors and students, $24 for Whistler Arts Council members and $12 for children, available at www.artswhistler.com or Millennium Place. A meet and greet with the artists will be held from 7 p.m. to 7:45 p.m. before the show.