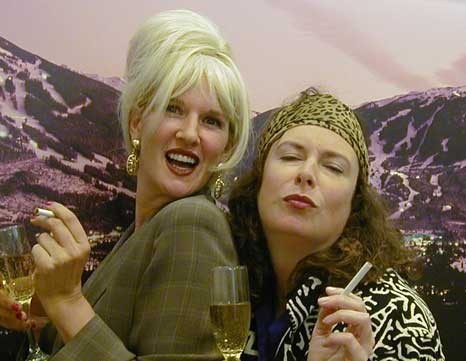 The cast of Absolutely Fabulous was hard at work in rehearsals last week.

Instead of looking for the director’s chair, it was a large blonde beehive of “Patsy Stone” bobbing up and down in a hot tub that alerted the presence of the “rehearsal hall”.

“Over here daaarling,” purred actor Michele Bush getting into character with red wine in one hand and script in the other. “They forced me into a hot tub. I told them I didn’t want to come in because they outlawed whaling.”

These Ab Fab gals — Bush and Monique Davidson — are devoutly dedicated to their acting craft and swear by their Lecroix spandex pants that they will do everything within their blue-eye-shadow powers to truly realize the depth of their characters — all two-inch stilettos of it, no matter how many bottles of red wine they have to guzzle through.

Characters in life, and on stage, Whistler’s most debaucherous duo brings glaringly to life the stars of Britain’s best sitcom, Absolutely Fabulous , in the staged-production of Fat on Friday, Feb. 3 as well as Feb. 9 and 10 at MY Millennium Place.

“We were all sitting around and haven’t done anything for a while; we were jonesing to get back onto the stage,” Bush said. “But what could we do? We had stole all the good lines from other Ab Fab shows for Poor and Fat , so we thought we would remount Fat again with a preview show for Gay ski week (WinterPride). We have such a good following with the gay men.”

And who wouldn’t with over-the-top characters who consider vodka martinis mother’s milk and the gaudy Las Vegas tourist highly understated.

The unapologetic drunks, completely self-righteous in their correctness, have won over television audiences for years and the theatrical Whistler production of Fat should do the same for Millennium Place audiences.

Fat was mounted four years ago by Bushwoman Productions to rave reviews and sold-out crowds. Television writer Jennifer Saunders’s words prod the funny bone as the fad-obsessed and vodka-swilling Edina “Eddy” Monsoon discovers an old friend from the past who is coming to visit. The reunion with the twiggy, ex-model friend spurs the need for Eddy to lose weight quickly.

“My entire wardrobe has developed stretch marks,” she complains.

Her square daughter reasons with her mother.

“Mommy you eat too much, drink too much and you take no exercise.”

“No, no, no. It is far more likely to be an allergy to something or build up of toxins or hormone imbalance.”

Audiences are invited to get into the Sex and the City on crack hilarity by dressing up in their best leopard print and net stockings, and toasting Whistler’s most hilarious show at martini receptions before and after the production.

Ab Fab is simply a must on anyone’s social calendar because, in Eddy’s words, “Everybody is doing it darling.”