Artists from Lil’wat Nation to design permanent pieces for two of Whistler’s 2010 venues
Jun 5, 2009 8:40 AM By: Holly Fraughton 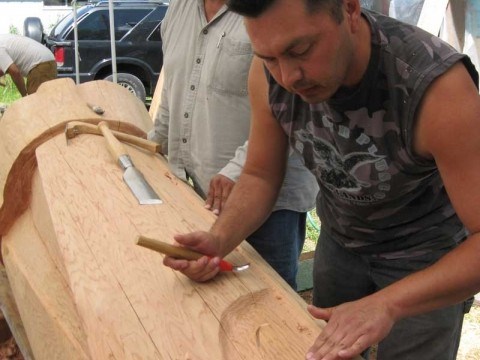 Under a blazing early summer sun, cedar wood chips fly into the air at the Mount Currie reserve, releasing a rich, clean scent into a warm breeze. The chips aren't flying fast and furious, but at a steady pace at the hands of carver Jonathan Joe and under the watchful gaze of artist Johnnie Abraham.

The two members of the Lil'wat Nation are hard at work crafting pieces for the Whistler Olympic Park and the new athletic centre at Cheakamus Crossing.

They're just two of the artists who have been selected to participate in the $2-million Aboriginal Art at Venue project for VANOC - a far-reaching program that includes unique, cross-disciplined welcome pieces from the Four Host First Nations groups to be placed at each of the 15 Paralympic and Olympic venues, plus plans for textile pieces, established and emerging artists' works and youth mentorship opportunities. Collectively, the project is designed to showcase the diversity of Canadian Aboriginal artwork.

Connie Watts, a B.C.-based mixed-media artist of Nuu-chah-nulth, Gitxsan and Kwakwaka'wakw ancestry, is managing the program.

"It's a dream, it's a real dream to be able to be part of a process that is so inclusive to Canada," she said.

VANOC issued a call for artists last spring, which garnered a wealth of applications from across the country. Now, officials are still in the midst of the artist selection process.

"We're still moving forward," Watts explained, "We're still responding and processing the (requests for proposals) and adjudicating a lot of the works."

The program is a both chance for individual artists like Joe and Abraham to raise their profiles and gain international exposure, while simultaneously uniting the country's Aboriginal community.

"The process is exciting and I think the number of artists that will be affected across Canada will be just remarkable."

The pieces will also be left in place at each of the venues after the Games.

"Its part of the venue build - the venues are legacy, these art pieces will also be legacy so they're all targeted to be permanent works," said Watts.

An added side-benefit of this project - another less tangible legacy - has been an updated, comprehensive national database of Aboriginal artists.

For Joe and Abraham, their involvement in the Aboriginal Art at Venue program is truly a matter of pride. Their decision to apply was motivated by a desire to restore a sense of pride in their culture and tradition, and to give the thousands of international Games visitors inspiration and a sense of understanding of the Lil'wat culture and heritage.

"Through the years, I found that there was hardly any proof that we did any kind of art here," Abraham said.

But after doing some research, the artist soon discovered that the Lil'wat Nation actually did have a rich art history: they carved territorial markers into trees and fashioned canoes and tools from cedar as well.

"Today, we need to express more of our culture to our people," Abraham said.

They also wanted to ensure that the Lil'wat Nation was represented at the Games.

"I wanted to be part of it; I wanted to express our people, because most of the stuff that's happening is (Coast Salish) style," Abraham explained.

These aren't their first large-scale commissioned pieces. Both artists were involved with pieces for the recently completed Squamish Lil'wat Cultural Centre in Whistler; the main doors, one of the spindle whorls, and canoes.

Abraham, who came up with the design for both of the welcome pieces, has always been in touch with his artistic side.

"Ever since I graduated, I knew I had something in me that I wanted to express in my own way."

Though he's dabbled with the hands-on aspects of carving, painting, airbrushing, printmaking and graphic design over the years, Abraham has finally found his calling designing artwork that incorporates surrealistic and spiritual images of nature.

When he heard about the Aboriginal Art at Venue program, he immediately began working on a proposal and design, and enlisted the help of Joe to transform his concept into reality.

VANOC seemed to like Abraham's designs; first, a cedar carving of intertwined feathers for the Whistler Olympic Park, and second, another cedar carving of a standing bear with a runner emerging from its chest, to be placed at the Athlete's Centre.

Both pieces draw parallels between the contemporary world and traditions of the Olympics and Lil'wat culture.

"So with this piece, you have the two feathers," Abraham explained, gesturing to the carving underway. "With us... to be able to hold a feather, you have to earn it. You can't just buy one, its symbolic. The main idea behind this was, because the athletes earn their medals, it's the same with us, we earn our feathers - the first time we go hunting."

Joe embarked his career as a carver at the age of 13.

"I saw a carving that Tyrone Joseph from Squamish Nation did. I just saw one and thought, 'I want to learn to do that." I got my own piece of wood and I had like a butter knife..." Joe trailed off with a smile.

Since then, he's refined his skills through apprenticeship opportunities with the likes of carvers like Joseph and Ray Natrall.

For years, carving has been a hobby or piece-work for Joe, but within the last year he's been able to turn it into a full-time career, setting up a workspace in front of his home in Mount Currie. During that time, he's come to discover that there is a very spiritual side to the tactile process of creating carvings like these.

"What (Natrall) told me is the tree has a new meaning, has a new life," Joe recalled. "I didn't know I was doing it to inspire myself or other people, or to tell a story - I didn't learn that until later on."

The pair has been whittling away at the first of their two pieces for a few weeks, and they plan to have them completed by the end of June and ready for installation by the fall.

Both are proud of their ability to make a living from their artistic endeavours, which isn't an easy feat for any artist.

"Last year, I was struggling," Joe said, "That was my learning point. I carved all year and hardly made any money, but I learned a lot."

Now, they hope their hard work and accomplishments may inspire other members of the Lil'wat Nation who have similar artistic dreams.