Five finalists vie for crown and year's worth of studio services
Oct 29, 2014 6:00 PM By: Cathryn Atkinson 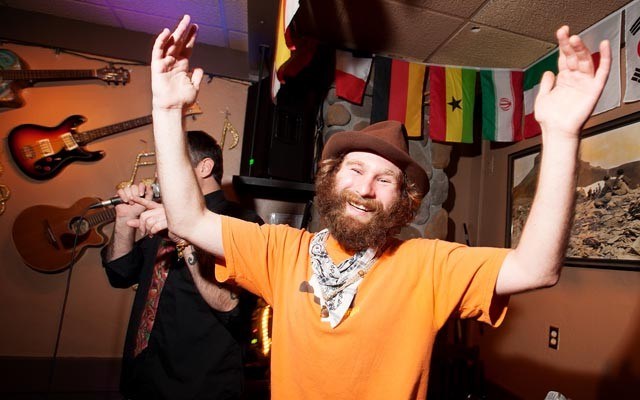 Acoustic and beat box wizard Will Ross is the winner of the fifth annual Whistler Music Search.

The Squamish musician was the final act out of five in a night for showcasing the Sea to Sky's emerging musicians at the Crystal Lounge on Thursday, Oct. 23.

"Amazing! Whistler, thank you so much!" a clearly delighted Ross told the audience as he was congratulated by music search host, Jon Shrier.

Ross got the packed bar going with renditions of Eminem's "My Name Is" and Fatboy Slim's "Praise You", and won a year's worth of services at WMN Studio in Function Junction.

In an interview the following day, Ross said he was grateful for the support he'd received from listeners.

"I want Jon and Jono and everyone else to know how appreciative I am. I have had a lot of support from people. People coming up to me last night and saying they came the first night. I'd maybe met them for five minutes, and they said they were back to see me play. I am really thankful towards the whole community," he said.

Ross moved to Squamish from Hamilton in January 2013.

"Judging by all the musicians who were out for the finals, I didn't think I was going to take it and when I did I was blown away. It was really, really a good feeling," Ross said.

He liked the camaraderie among the competitors.

"When I did the first round there, I jumped up and did some harmonica with the McQuaid band, so playing with all those people... it's really a good-spirited event."

He said he would use his studio time to shoot some live Will Ross Band music videos to support his album Freeloader, which came out in August.

Second place went to The McQuaids, performing cousins Oliver and Kurtis, who took home a guitar.

The other performers in the final, after three weeks of preliminary competition, were Jenna Mae, Neverland Nights and B-Syde.

"I've gotten to see some artists that I haven't seen before, which is good," said Steve Clark of WMN Studio, one of the judges for the final.

"It has been great. It puts pressure on the development side of music... and it's a networking experience."

Other judges on the night were the Crystal Lounge's manager Jono Young, and Whistler FM host Denise Howe. Pique's Brandon Barrett also judged the preliminary competition but was unable to make the final.

Shrier said: "It was overwhelming; that's what it felt like when I got call after call, with the number of acts that wanted to enter. And I was inspired, because as soon as they were playing from the first week until now, it was as if they'd taken it to another level.

"To me, it was a privilege just to be asked to be a part of this and what happened is that it has created a pulse, it's living and breathing now and it's going to have a home next year and maybe the year after that.Hopefully, it can grow into something that we could include charities in. Take some of that success and spread it even farther.

"I'd like to think we could have the next Michael Jackson here or Justin Bieber, but to be realistic we can say that we have people performing their hearts out here."

In all, 15 acts from the Sea to Sky region took part, with judges eliminating four each week. The winners from each night went on to the final, along with two wildcards.