Adventures on the White Planet

Whistler's Leslie Anthony reflects on decades of snow
Sep 24, 2010 8:10 AM By: Andrew Mitchell 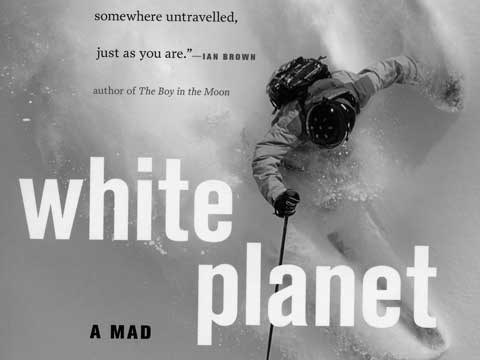 Every ski bum needs a few things: a passport, because the local mountain/hill/valley will never be enough; avalanche gear, because no self-respecting ski bum is going to stop at a boundary rope if there's something even a little better to be enjoyed on the other side; ski bum friends, because only other ski bums can truly relate; a black suit, because ski bums go to a lot of funerals.

Leslie Anthony, despite his PhD in zoology (and early focus on reptiles and amphibians) could be defined as an epic ski bum - one of the breed that finds skiing the backside of the local bump on the horizon just as compelling as telemarking down the highest volcano in Mexico - only to almost slide into a crevasse after slipping on the ice surface, frigid cold and high altitude taking their toll.

This is how Anthony's newest book, White Planet: A Mad Dash Through Modern Global Ski Culture , begins. In the Prologue, Anthony and a friend take their lumps while learning to ski on 30-year-old equipment - on a hill with 115 vertical feet of skiing no less. In the first chapter Anthony and another friend are staring down into the caldera of North America's highest volcano at 18,504 feet.

Taken in its parts, White Planet is really a collection of essays; snapshots from a career that included stints as a liftee, a journalist and editor at top ski publications, and as an adventurer for the fun of it. Anthony's obsession with skiing has taken him around the world, usually in the back of economy class; Banff, Chile, New Zealand, Colorado, Alaska, Switzerland, Austria, Newfoundland, Iceland, Scotland, Greenland, Lebanon, Spain, Italy, across B.C., Japan, Bulgaria.

He has skied in the tracks of intrepid explorers - Ernest Hemingway on telemark skis and alpine skis, in the backcountry, in the terrain park. He was there for the first X Games, for the twin-tip revolution.

For every age and destination, Anthony shares new reflections on what it means to be a ski bum, the sum total of which probably comes closer to defining it than any single thing I've read on the topic.

Anthony writes very well. His pace is perfect for the material, which isn't always about powder runs and beer. In fact, the work often stumbles into darker regions, from his experiences ski bumming in Chile while the country was being consumed by a Marxist revolution, to hiking up bowls outside of Beirut while Israeli jets fly overhead and Syrian soldiers man the border. He talks about death, about Trevor Petersen, Brett Carlson and Shane McConkey - people who lived and died for their sport.

But through it all, Anthony maintains his good humour, and this book promises some laugh out loud moments. Consider these lines from Chile:

"Out of bounds? There was no such thing. We could go where we wanted, and people did, followed by a squadron of hopeful Andean condors."

Or this nugget, contributed by freeskier Shane Szocs: "It's impossible to look like an idiot in Japan. We could walk around downtown Tokyo dressed like this (Shogun-era costumes), and no one would notice."

Or from Scotland. "The immediate comparisons that sprang to mind on first(ish) sight of the Scottish Highlands - New Zealand's South Island and Chilean Patagonia - were largely due to the a) profusion of sheep and paucity of humans, b) abundance of trout and salmon rivers, c) brown-hilled, cardboard landscapes, d) heinous peaks veiled by mist and scary weather, and e) banshee winds and changeable snow. The latter would rule the trip, but frequent stops for distillery tours would make it tolerable."

As I wrote at the start of this review, there are a few things that every ski bum needs. I would count this book among those things. I can't say it any better than that.