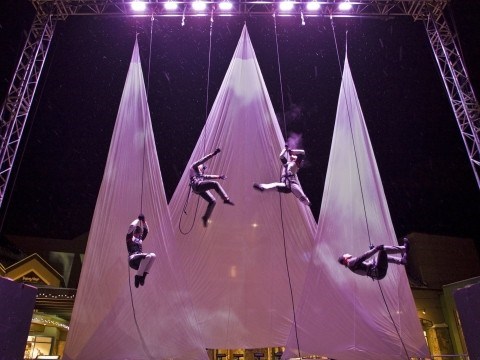 A one-of-a-kind commissioned performance for the Olympics that involved aerial dancers, spectacular imagery and an original soundtrack has been cancelled.

"Inspired by Place," the performance that has been referred to by members of the arts community as Whistler's "signature" artistic piece for the 2010 Games, absorbed $110,000 in funding before it was cancelled.

In the fall of 2007, Whistler Arts Council commissioned the Aeriosa Dance Society to produce their first-ever commissioned work. Aeriosa's artistic director, Julia Taffe, choreographed the "Inspired by Place" performance alongside aboriginal choreographer Michelle Olson and hired a troupe of four professional dancers for the interdisciplinary performance. It was designed to reflect Whistler's unique landscape, inhabitants and spirit using aerial and grounded dance accompanied by an original score of music and projected images as a backdrop.

The dancers rehearsed the piece in indoor climbing centres and their studio in Vancouver, and headed to Whistler at the end of February to practice the performance in Mountain Square.

But last fall, before they came to Whistler to workshop the performance in front of the public, they hit a major stumbling block.

"They spent the year sort of putting this vision together," explained Doti Niedermayer, executive director of WAC. "One of the first things that happened along the way was that it was determined that they could not dance off the Carleton Lodge."

Carleton Lodge is the only building in the village that is tall enough and has a solid surface for the dancers to perform on.

"A lot of their aerial dance is off eight-storey, 10-storey buildings - they dance off the Squamish Chief," Niedermayer said. "So they need a certain amount of height to actually make any impact whatsoever."

In October, WAC discovered that they weren't allowed to use the Carleton building for the performance. They would have to get permission from all of the individual owners in the building, and liability insurance was an issue.

The team went back to the drawing table and Aeriosa emerged with a backup plan: they suggested using a 25-foot truss structure instead.

"I think really... if I look back now, the turning point came when it went off the Carleton Lodge, because there was no way to get that high again," Niedermayer reflected.

At the time, both WAC and Aeriosa were confident that the 25-foot truss structure would be just as effective. It wasn't until they actually saw the workshops that everyone realized the final product wasn't matching the original vision.

"...It was really low and, in a lot of ways, it was very underwhelming. It was not what I expected. I don't think it was what a lot of people expected, because when we have talked about Aeriosa being a part of this piece, everyone's expectations went to aerial dance."

Stakeholders were expecting a dramatic, jaw-dropping performance from great heights.

"Off this 25-foot structure, it's sort of like, 'so what?'" Niedermayer said.

"...We're Whistler, we're used to watching people hurl themselves off cliffs," she added.

WAC and the dance company went back to the drawing board again to discuss the possibility of bringing a larger, 50-foot truss structure into Mountain Square. But all parties quickly agreed that it would be too much of an imposition on the surrounding businesses, and the cost would be too high.

WAC took its concerns to the groups that were partnering on the project, like the RMOW and the Cultural Olympiad.

"It came down to logistics and what the piece required," Niedermayer explained. "It actually required more than we could afford to pull it towards something that we would be very proud of."

They made the difficult decision to pull the plug on the performance in early March, immediately following the rehearsals. Since then, Niedermayer points out that the overall budget for Whistler Live! has changed significantly, with a large chunk of funds redirected from performances along the stroll back towards the Medals Plaza.

"We'd already invested so much money and so much time, and it just was not possible."

The cancelled project used up a $100,000 grant from the federal Arts Partners in Creative Development program, which is intended to support commissioned works for the 2010 Games, plus about $10,000 in additional funds.

While Arts Partners in Creative Development has expressed disappointment in the performance falling through, Niedermayer said they recognize that there are risks associated with commissioning original work.

"Sometimes that risk may not pay off, so not every piece of music that Beethoven wrote or every piece of writing that the great authors wrote went to print," Niedermayer said.

Now, WAC is forging ahead, working on new projects and working with their partners to plan Whistler's entertainment offerings during the Games.

"For me, personally, that was only one piece. I never felt that that was our only piece or the only thing that we were going to do," Niedermayer said.

She's hoping to showcase local performers alongside the bigger entertainment acts, helping them to capitalize on Games-time opportunities.

"We are showcasing ourselves to the world because we actually have talent that's worthy of that - we have excellent photographers and visual artists," she said.

The Arts Council also has a new project up their sleeves: a collaborative public art project with the First Nations communities. They've applied for funding through the Arts Partners in Creative Development program again, and are expecting to hear in mid-July if their application has been approved. If they receive funding, the new piece would be installed before the Olympics in February.