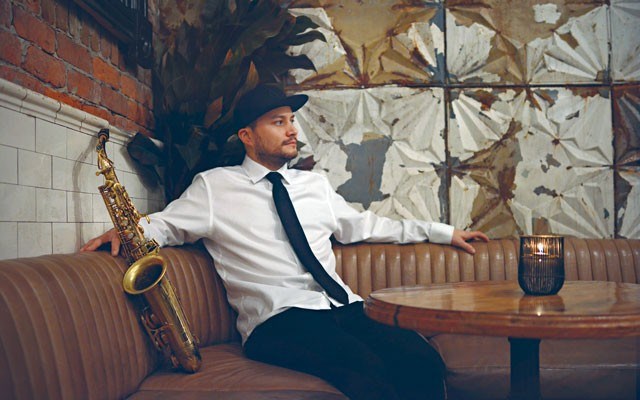 It's wedding season for musician Alex Maher and he is a busy man.

"I play at a lot of them. It's crazy! I was just haggling with a bride about extra services added to her wedding show. All of a sudden there are a lot of weddings coming at me — I do corporate events, and I'm playing more cool festivals," Maher says over the phone from Vancouver.

"Weddings obviously pay a lot and they are both rewarding and stressful; you have to deal with families, play songs you wouldn't normally play, but they are special to people."

A multi-instrumentalist and singer-songwriter, Maher has a foundation in jazz, with his soulful saxophone playing shows, but also fuses hip hop, pop and funk.

Those skills are in demand, as they have been for the better part of two decades.

Along with the nuptial gigs, he also plays six shows, five nights a week at pubs and clubs in the city, solo and even a few with the Alex Maher Band.

Around that schedule, Maher is fitting in shows at the Dubh Linn Gate on five Sundays over the summer, the first being on July 2, at 3 p.m.

"I've played there a few times already. I sing, loop music together and sing," he says.

"Sunday is my day off, but it will be cool to play in Whistler. I decided it would be fun to pop up."

Maher's one-man loop show uses a pedal board for guitar effects alongside his playing, and has a loop pedal for the drum machine, saxophone, and percussion. It's a layered musical experience.

Prominent in his shows is Maher's latest solo project, the five-track Aether EP, which was released in February.

It is a powerful return to form two years after seeking help from the outpatient program at Daytox Vancouver, after almost a decade of substance abuse.

Open about the experience in previous interviews, Maher agrees that it is an emotional album for him.

"For sure, but also the songs are, lyrically, close to my heart," he says.

"It's rewarding when I can sneak in one of those songs into my set. I am comfortable playing them in a mash-up set, and I am happy with that.

"The response to the album has been really good. It is opening up a lot of doors that had been flapping in the wind for so many years."

A full studio project, he recorded it with musician friends, including Carly Rae Jepson collaborator Ryan Stewart, with whom Maher collaborated with on "No One Else," which he describes as one of his favourite tracks.

He also likes "Say 2.0," which is a new version of a song he recorded with his previous band Flannel Jimmy in 2000, a song he describes as an urban myth because it isn't in circulation.

These days, he is feeling more inclined to let the music be heard.

"I'm trying to transition into more of a showcasing of Aether songs in my shows," Maher says.

"The songs on it rose to the top of a well of songs I wrote. They were ones I could put an upbeat arrangement to, try and make a cool presentation of for live shows. They made their way into my regular category of remixes and mash-ups, stuff like that."

The majority of the songs were written as Maher came out of a dark period in his life, and the pain of addiction can be felt through the lyrics.

"For a decade I didn't really have anything to market or push and that left me with a lack of identity in the current marketplace," Maher says.

"I clawed it back. You have to have something to show. And it's really nice, I feel like things are moving forward."

But it helps that the music never stopped for him, he says.

"It definitely enabled the continuation (of the addiction) to some extent because as long as I could keep it together and perform, there would be a lot of cash in my hand at the end of the night," he explains.

"It took a lot of learning, the hard way, to get out of that.