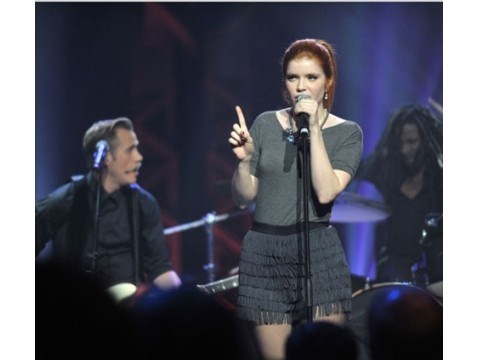 The bottom line is that Ali Milner should probably have wreaked havoc upon her hotel room on Sunday night. She should have smashed the porcelain sink with her bare hands - hands that should have been soggy from wiping away all her tears.

See, Milner was booted off Cover Me Canada on Sunday night, after eight weeks. She'd made it to the top three and was the only one to do so without immunity.

She was so, so close to victory. She should be devastated.

But no. Not Ali. An optimist by nature, she was feeling both "awesome" and "incredible" on Monday morning when Pique called her up. Her level-headedness was both inspiring and infuriating. We want to see some holes on in the walls. We want drama .

Instead, Milner said: "It's all funny how life happens but it's all really good. I'm very positive."

After the news was handed down on Monday night, Milner said there were "a lot of hugs, a few tears" backstage. She then drank some wine - a pleasure she'd denied herself for the last eight weeks. She hadn't slept either, so she indulged in that as well and had just woken up when Pique called her. After the conversation, she was going to drink a cup of coffee (another pleasure she had been avoiding) and then she was going to explore Toronto.

"I feel incredible about the whole eight weeks. It's pretty crazy that I was on a television show at all and I got to be on it for so long," she says. "It's be a total blast and I met some amazing, amazing, amazing people and I'm stoked about everything."

Just to be sure she wasn't masking her emotions to save face, Pique called her mother, Jane Milner, to get the inside scoop. Jane said she hadn't talked to Ali much by that point, but did get a few minutes with her by phone shortly after the show on Sunday night and, she said, Ali was "stoked."

"Ali is coming out of this really a winner, in terms of how many people know about her, and her profile across the country now," Jane says. "Gosh, I mean to have eight weeks of live television performance, that's phenomenal!"

Okay, well now we know where Ali gets it.

But despite the excess layers of positivity, Ali says she's "a little choked" that they were handed the Barenaked Ladies' "One Week" during week eight. For those who didn't see it, Milner had one hell of a time handling the rapid-fire lyrical flow of the song.

It was clear to anyone who was watching that Milner and her band had put considerable effort into tackling the song (Milner says, "It was the hardest song I've ever had to do in my whole life, probably"), except the judges. Sunday night's performance was Milner's only performance, during her eight-week run on the show, that the judges - Jordan McKnight, Deborah Cox and Ron Fair (along with guest judge Johnny Reid) - didn't like. Despite a stellar, ethereal take on Joni Mitchell's "Both Sides Now" earlier on in the show, a duet with Melanie Morgan for which Milner was the clear winner, the judges still voted her off at the end of the program.

"I would like to have challenged Deborah or Jordan or any of them to try and do that song because I'm not sure any of them could."

But this was the only evidence that Milner showed any ill-will or misgivings about the way things turned out, and even then it would take a psychology degree to suss out any negativity because she was still sweet as honey as she said it. And then she said:

"But no regrets. I think we did what we could with the song, because it's an awesome song and I'm really pleased with how it turned out."

Milner lost out to Whosarmy and the Melanie Morgan Band, the latter of which had won immunity through online votes. Milner was the only one of the three who had never won immunity - despite all the campaigning efforts by this here magazine - which, surprise! she has no qualms about.

"You can't beat the East Coast, man," Milner says with a laugh. "They're super down with the Internet and I don't feel any disappointment about not getting any immunity. And it's kind of neat to be able to get by on musical merit alone."

Now that Milner and the band are out of the competition, she says they're going to focus on writing and recording new music. She assembled the band specifically for the show while still in Vancouver and she says they've been working on new music in the little spare time they'd had. Hawksley Workman and Gavin Brown, both of whom the band worked with on the show, have expressed interest in working with them in the future. Pique spoke with Milner less than 12 hours after she'd been booted from the show, so it was difficult to articulate, or even to fathom, the opportunities that lay ahead as a result of this experience.

She says, "There are big things to come. No one's disappointed and everyone's really excited for the future."