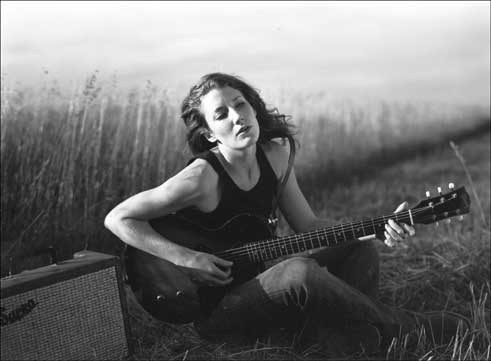 "I am writing songs that have substance to me." Kathleen Edwards will be at GLC March 11.

What: The Red Party

Singer/songwriter Kathleen Edwards, just returning from U.S. and Australia tours and readying to leave for another U.S. tour and show date with Bryan Adams at the Juno Awards, managed to squeeze in a favour for close family friend Mary McNeil, president and CEO of the B.C. Cancer Foundation.

The Canadian songstress, who is no stranger to sharing the stage with the likes of the Rolling Stones, AC/DC and Rush, agreed to perform an intimate solo set at The Red Party Benefit Saturday, March 11 at the Garibaldi Lift Company to help raise funds for ovarian cancer research.

"I am in the middle of two tours with five days off in between, and I am more than thrilled to be included," Edwards said from her home in Ontario.

The inaugural Red Party was the brainchild of Whistler Blackcomb’s Heather Martin, whose mother died of ovarian cancer last year.

"I lost my mother to the cancer just two months after she was diagnosed," Martin said. "It is a silent killer and has only a three per cent survival rate…. With all the awareness about breast cancer, I felt it would be a great idea to do an event for ovarian cancer."

The evening includes a wine and cocktail tasting from Yalumba, Mission Hill and Grand Marnier, along with a silent auction and, of course, the highlight of the evening, a solo serenade from Edwards.

Some call Edwards alternative country. The roots rock tinges of her eclectic music background, ranging from Neil Young and Tom Petty inspirations to the likes of Johnny Cash and Sinead O’Connor, fuel the label. However, the common denominator behind all of her seemingly mismatched favourites is their songwriting strengths.

The New York Times heralded Edwards’s songwriting talents: "(Her songs) can pare situations down to a few dozen words while they push country-rock towards its primal impulses of thump and twang."

The intimacy of her music translates to any audience, whether a sold-out show at the Commodore Ballroom of more than 1,000 listeners or a cozy fundraiser of 200.

"I am not regurgitating something someone wrote sitting at a laptop at Starbucks," she said. "I am writing songs that have substance to me. I think that is why they are of substance for other people. It’s the reason people connect with you, because they have something to connect to."

Edwards will share music from her newest album, Back to Me , released on Zoe/Rounder, traveling an ambitious range of themes, styles and emotions from the hard-earned wisdom of Good Things to the bruised emotions of Independent Thief. Each of her 11 new songs, produced by Jim Scott of Tom Petty-fame, stands solidly on its own for a three-dimensional experience rather than a repeat, remake playlist song after song.

Originally a classical violin student, the stereotypical Canadian gal was introduced to the magic of songs around the campfire at summer camp, where she first picked up a guitar.

"Discovering this music, singing James Taylor songs all day and night, was very different from my Bach and scale teachings," she said. "All of a sudden I was exposed to this totally different music influence."

More than a decade later, Edwards will return to the one girl and guitar show she began with, leaving her band at home to rest up for the next tour.

"Coming solo is a pretty rare thing," she said. "I look forward to it. I am just happy to make a contribution to such a worthy cause."

Tickets are $50 and include a glass of wine and wine tasting. All proceeds benefit B.C. Cancer Foundation ovarian cancer research.