48-hour festival offers platform for all-inclusive access to underground arts
May 15, 2009 6:20 AM By: Holly Fraughton 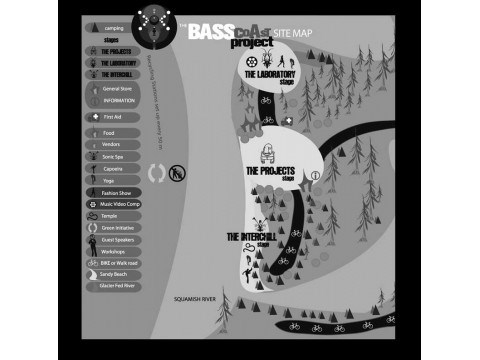 There's a lot of noise coming up from the underground art scene here in Sea to Sky country, rumblings of yet another festival planned for this summer. Dubbed the Bass Coast Project, this event is chock-full of enough activities, art and music to keep attendees wide awake for the entire 48 hours it runs.

There are three creative masterminds behind this brand-new event: Andrea Graham, Andrea Helleman, and Liz Thompson. The trio met in Whistler seven years ago, and today they're good friends with similar artistic passions.

Graham is a DJ with a background in classical and jazz piano and vocals and electronic music, while Helleman and Thompson joined forces four years ago to start their multimedia company, M Studios. They've worked on a range of web, graphic, film, fashion design and photographic projects, successfully formalized their lifelong hobbies and turned them into a professional, branded business.

"We're really arty, and the reason we're able to be successful as artists is because we kind of have business and marketing sense. That seems to be a big thing for Bass Coast, is we just love promoting. We just discovered today that we're promoters," Thompson said with a laugh.

The Bass Coast Project, however, is an entirely different animal than any of their other projects.

Unlike some of the big musical events that have taken place within the region in the past year, the Bass Coast Project focuses on a myriad of creative endeavours from the underground art scene - everything from fashion design, music videos, yoga and capoeira to organic gardening and hula hooping - and showcasing them during a 48-hour festival that promises to be an enlightening experience for any of the 1,500 people who snag tickets to the inaugural event.

The emphasis is on unity and participation.

"It is a platform for all the arts, and participants are welcome! We want everyone there to be involved," said Graham. "Example: you could bring art to hang in the forest, cook pancakes for your neighbours, listen to a presentation about science while a live percussionist plays, attend a yoga class with a DJ playing the soundtrack, or just dance your ass off!

"We will provide a platform for all the amazing local talent combined with an incredible international lineup that really integrates the arts."

All three organizers see the festival as a community-based event, featuring all participants as central players.

"We aren't the faces of Bass Coast, we're just bringing it together," Helleman explained.

It's all set to take place on a 250-acre private campground in the Squamish Valley, with on-site hanging glaciers, a river, lush forest, and beaches. Once inside the festival grounds, everything is open and all the workshops are included in the ticket price.

The concept for the festival actually emerged a few years ago, when Thompson and Graham were wrapping up another trip to the Burning Ban Project in Nevada.

"(Thompson) and I have always wanted to create a festival that combines our favourite aspects of other festivals, while also reflecting the unique creativity and personality of our hometown," Graham said.

"(Helleman) has brought a fresh outlook to the event by expanding the vision from just a sonic experience to really emphasize fashion, photography and film. We really all balance each other."

They saw a need for an organized event, something along the lines of Shambhala for the Sea to Sky corridor. And they'd thrown small-scale outdoor private parties before, inadvertently drawing crowds of about 200 people, so it just made sense to go legit and host a festival that incorporates all of their loves: fashion, music and art.

But the idea has just become a reality this year, and the three friends began working full time on the project in January.

"All these things kind of fell into place, but since finding the land, its been a lot of work just with all the different government agencies and stuff, making sure that it's a safe event and taking care of all the logistics," Helleman said.

Organizing the festival has been a huge investment of time, energy and money over the past four months. They've been working closely with local government agencies, Search and Rescue, and the RCMP to ensure that the event goes smoothly.

But since the B.C. festival scene is already pretty reputable, organizers didn't have a hard time getting musicians on-board for this inaugural event. The lineup includes performers from throughout North America, like Fort Knox Five, An-ten-nae, Neighbour, Lighta! Sound, and Bluetech, plus some serious local talent.

"We have a strong electronic music community in Whistler with Mat the Alien, Vinyl Ritchie, DJs Chili Thom, Surgeon, Kori K, Ricochet, Sheila, Evolve, Foxy Moron, DJ Phroh, Toddski Chunky Chornz, Milton, and Foxxi Ozzi, just to name a few. All of these DJs are active in promoting different successful events," Graham said. "Its time now to bring everyone together."

They've also attracted a range of talented artists and performers from throughout the province and further abroad, who are interested in coming out to help shape the Bass Coast Project.

"We have such an amazing artistic community!" Graham said. "...In addition to musicians we have world class visual artists, yoga instructors, acrobatic performers, dancers, painters, fashion designers, and photographers who are all involved in the project."

Tickets are $130 until June 1 then up to $145. The ticket price includes camping, and so far, the response has been strong, with ticket sales starting even before the event was announced. For more info, check out www.basscoastproject.com .