Animal Nation on the prowl 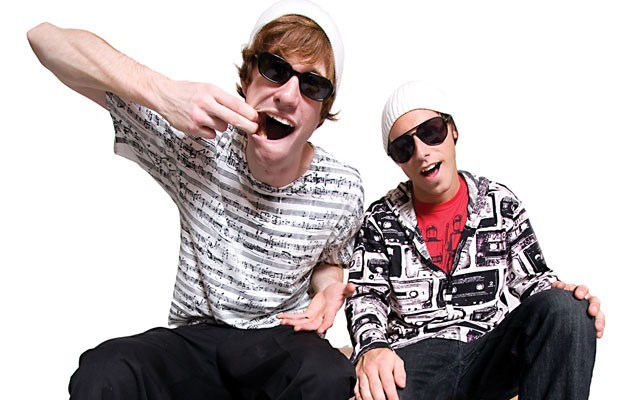 Say Ah! Whistler rappers Animal Nation are out on the road. Photo submitted

Animal Nation is taking it to the nation.

The Whistler hip-hop duo, Garnet Clare (Tall Man) and Mike Armitage (Armadillo Slim), have just started a Canadian tour that takes them from Red Deer to Halifax. The latest tour opened in Vancouver a week ago.Coming from a resort that usually has musicians descending from around the world, Animal Nation is now in the position of taking the resort's club sound in the opposite direction.

Tall Man says Whistler's reputation tends to precede them — so when they are performing away they tend to meet up with fans who already know them.

"The nice thing about it is that Whistler is so transient, so many people are coming and going. So even if you play the same venue every week, it's always a different crowd and even more so in the winter," Tall Man says."That means there are so many people from all over the world that you are able to have an impact with."

The album, It's Good to Be Us, has a name that is very, very Whistler.

"It's a term coined by my former boss at the Bearfoot Bistro, Andre St. Jacques. I worked there for 10 years. That's his toast, and so the album is named after him. An homage to him," he laughs.

"He was excited about it. He got to tell his friends I made an album for him."

"We play there quite a bit.

"We're just getting this album out there and pushing it as hard as we can. We got the actual, physical copies today and we're ready to hit the road."

They are supporting Vancouver rapper Madchild from Swollen Members.

"He always has a good draw of fans. We're getting it out there to people."

This is Animal Nation's eighth album, and Tall Man says the experience gets better each time.

"The album is doing really good so far. We've just put the whole album up on YouTube," he says. "I went up a week ago and it has had over 3,000 hits already, and there have been a lot of pre-album sales."

"We were embracing us a little bit more because it's great to be us," Tall Man says.

"We write our own lyrics individually. When we're recording we will sometimes help each other out or sometimes wait until we have the house to ourselves and get it done alone. Whatever seems to work is what we go for."

It's Good to Be Us can be heard at www.youtube.com/watch?v=eR3QzCy-6sE.