Latin dance instructor aims to develop and teach ‘Whistler-style’ of salsa
Sep 4, 2009 7:59 AM By: Holly Fraughton 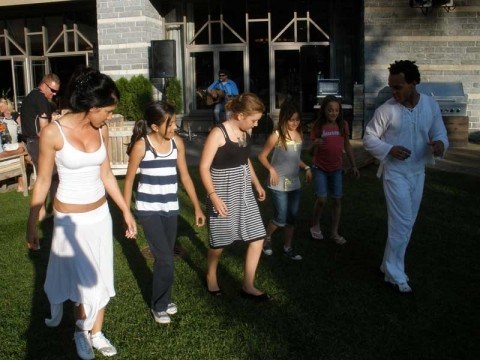 Emile Sanchez has been dancing since he was in diapers. A native of Santo Domingo, Dominican Republic, Sanchez grew up surrounded by baseball, track and field and, of course, dance.

"Living in the Dominican Republic, you can't help it! You dance in the streets since you are a little boy," he said with a smile. "...With us, you just wiggle around and drive us to the baseball diamonds - that's all we do, baseball and dance."

But Sanchez wasn't a natural dancer. He actually had problems with posture, flexibility, leading and following techniques, and core stability when he first started out.

"Believe it or not, when I was growing up, technically I wasn't a good dancer," he admitted.

He only really started taking dance seriously when, at the age of 16, his aunt Dostora invited him to take dance lessons with her friend, "Chicha," who used to perform with his uncle back in their university days.

"Basically she said to me, 'Oh my God, you're not part of the family, are you?'" he said with a laugh, recalling his first lessons with Chicha.

But he stuck with it and kept practicing, and eventually, all of the pieces fell into place. Then, in 2000, Sanchez had the opportunity to come to Canada to live with his father. He attended the Tourism & Travel Management program at Georgian College in Barrie, Ontario, where he quickly discovered the social Latin scene and offered his services to demonstrate leading and following techniques to couples interested in learning Latin dancing. That soon led to work teaching classes at a local dance studio.

"After this experience I became passionate (about teaching) people about the Latin culture (and) all about its art, music, dance, culture and traditions and people's attitudes and beliefs."

He came to Whistler in April 2008 to complete a co-op placement at ZipTrek and after three months passed, he realized he didn't want to leave.

"It's just so unique," Sanchez said with a grin. "Basically, being able to work and once you're off work, just enjoy the nature, it just relaxes you and you kind of feel like a tourist."

But dancing and teaching dance are definitely two different things. Like any art form, just because you're good at doing it yourself doesn't necessarily mean you can teach someone with two left feet even the basics of dance.

Sanchez started teaching dance here in Whistler after he noticed a sign on the door of Lululemon advertising free hip hop dance lessons. The proverbial light bulb went off and soon, Sanchez was talking to the manager of Lulu, trying to organize his own drop-in classes. That quickly evolved into formal classes at The Core last October, which immediately attracted about 20 people - an unexpectedly strong turnout.

"There is one studio in Function Junction; obviously they don't offer the style that I do."

Whistler's dance scene is definitely less organized than what Sanchez encountered in Toronto, but he said he's still seen some amazingly talented dancers busting moves on dance floors throughout town.

Latin dance typically includes the cha cha, rumba, samba, salsa, mambo, meringue and some tango. But as Sanchez explains it, the styles vary from region to region - there's a distinct style of leading in Latin dance in L.A., Puerto Rico, New York and Cuba.

Now, Sanchez has developed his own "Whistler-style" of salsa.

"Basically, it's the attitude from the Dominican with a couple of twirls and spins from L.A. and New York, and your traditional basic steps," he said.

Sanchez has been offering drop-in classes at $15 for a two-hour session but now he's getting ready to release a new schedule of classes through his Areito dance program, featuring more classes at various locations throughout Whistler.

Areito is actually meant to be a recreational and cultural experience.

Sanchez explains that the name actually comes from an aboriginal group, Tainos, from Santo Domingo, who celebrated music, art, dance and history around the time that Christopher Columbus "discovered" the island in 1492.

"I feel that Areito is what Whistler is all about: Whistler has its culture and history, musicians and versatile dancers..." Sanchez said.

He's looking for spaces to run classes for a wide range of demographics and hopes to offer sessions for kids and teenagers, as well as singles and couples classes for adults, plus a dance jam session for locals and visitors alike.

He is confident that there are many people who are interested in both learning the basics and how to take their abilities to the next level.

Sanchez will be offering free lessons at an upcoming Terry Fox fundraiser organized by the Four Seasons, which is being held at Merlin's on Friday, Sept. 11. But before that, he will be performing as part of the Whistler Arts Council's Street Entertainment Series on Friday, Sept. 4, from 4:30 to 5:30 p.m., on Saturday Sept. 5 from noon to 1 p.m. and from 4 to 5 p.m., and on Sunday, Sept. 6 from 2 to 3 p.m. and 6 to 7 p.m.