Art and soul at Bizarre Bazaar

Exploring the roots of Whistler' favourite artisan market
Nov 27, 2009 7:24 AM By: Holly Fraughton 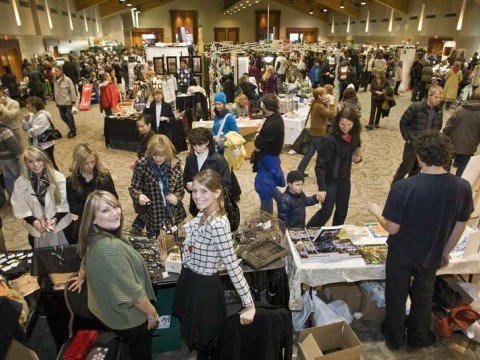 This weekend, the Telus Conference Centre will be filled with a cacophony of colour, sound and smells, as the Whistler Arts Council (WAC) hosts the community's annual artisan fair, Bizarre Bazaar.

The "meet-at-the-Farmers-Market" tradition carries on in a very big way during this two-day event, as friends, family and visitors peruse the assortment of goods crafted by B.C. artisans. But unbeknownst to most, this popular event actually has real history and roots.

"This year is the 21st annual Bizarre Bazaar, so it was started over two decades ago by volunteers and it was originally started to be a fundraiser for the Children's Art Festival," explained Ali Richmond, spokesperson for WAC.

The grassroots fair that started out at the old Myrtle Philip school snowballed into what is now the highlight event for the local artisan community, drawing crowds of almost 5,000 people to admire and purchase handmade wares. It continues to act as a fundraising event for WAC's programs, with proceeds from the door going towards annual events like the Children's Art Festival, ArtWalk and Art Workshops on the Lake.

"The number of artisans has definitely grown since then," Richmond said, pointing out that the event, which used to feature the work of about 30 people, now includes work from almost 100 artisans from across the province, though most are from the Sea to Sky area.

"We like to keep it (at 100) because we don't want to get too many in there or else it becomes overwhelming and it's not that great for the artisans," she explained.

And getting a table at Bizarre Bazaar isn't just a matter of paying a fee and setting up shop. A lot of work goes into preparing for the event and each artisan must be selected through a competitive jury process that considers the product, presentation and the popularity of the medium.

"There are definitely some categories of artisans that it's a little bit more competitive, like jewelers," Richmond said. "We receive a lot of applications from jewelers, so that's a pretty tough competition."

Ambitious Christmas shoppers can easily tick a few people off their list seeing as there's everything from ceramics, jewelry and fine art to aromatherapy and wood, glass and metal on offer.

A few of the returning artisans include Fiona Hickey of Floydie Bear, who will be selling her Monster Patroller Teddy Bears, animal scarves, bandanas and handmade eco-bags; Jamie Pope of Pretty Bird Jewellery Designs with her fine silver jewelry and Terri Braun of Xocolatl Chocolate Creations with his chocolate concoctions.

"We always seem to have a lot of returning artisans, which is great, because I think a lot of people that come to Bizarre Bazaar expect to see the same familiar faces," Richmond said.

Of course, there are also a few new faces in the crowd this year. Rachel Hayward of OTO Fleece will be selling vibrant kids' fleece clothing, Michelle Franklin of Intriguing Designs is selling leather fur-trimmed hats and Stephanie McPherson introduces Stephanimals, stuffed animals that come with their own booklet and story, while Rebecca Smith of Tongue & Tulip Designs displays her bags, feather clips and seasonal accessories and Donna Stark of Wearable Silk Art sells delicate silk clothing.

Even if you're not in the shopping mood (or the wallet is feeling a bit light) there's also a significant social aspect to the annual event. Locals come out in droves to browse the tables with friends, nibble on baked goods and enjoy some live music while the kids are kept busy at the craft station. This year, Rachel Thom, Brother Twang and Alice Newton will be performing while Michele Bush is on "festive patrol," circulating among the shoppers.

While most of the clientele are area residents, the event is held on the American Thanksgiving long weekend in hopes of attracting tourists and expanding the reach of B.C. artisans.

"It's good to get new people in there because a lot of locals, I think, come now for the socializing," Richmond pointed out.

The fact of the matter is that while Bizarre Bazaar is considered by the public to be a fun, successful event, many of the participating artists don't make a lot of money. So, to find out how beneficial the market has been for artisans, WAC conducts a survey after each event.

She added that products and price points may factor into individual artisans' success or lack thereof, so WAC encourages each vendor to have an assortment of pieces at different price points to appeal to each and every shopper (and their budgets).

"There are a lot of people that will come and they might bring only $50 and they want to spend it at a few different booths. Not everyone comes to spend $300 at a time."

Jules Vagelatos will be participating in Bizarre Bazaar for a second time, selling her line of handmade custom leather belts and accessories dubbed Love Jules.

"It's just a great venue and its great to have all the locals coming out and buying products from local artisans," she said.

But Vagelatos finds the greater value of the event is the additional exposure she gets.

The Whistler resident studied at the Nova Scotia College of Art and Design and began selling her wares here at the Farmers Market about a year and a half ago.

"I worked for a leather smith in my last year of art school and when I got out of school I was kind of feeling a little lost. I'd had a studio space for about four years and I come home to Whistler and I don't really have anything, so I also wanted to make a little bit of extra cash."

So she bought the basic tools and started making pieces from recycled material that she finds in vintage stores, drawing intricate designs onto them with wood burning tools. Her designs run from about $85 to $130 depending on the level of detail and embellishment on the piece.

Vagelatos is one of many artisans who has spent a lot of time and energy preparing for this year's Bizarre Bazaar. Besides creating enough stock, it's also a challenge to make the display look appealing and approachable.

"It needs to be a space," she said. "It really needs to be an inviting space so people can come in and experience, almost like a story."