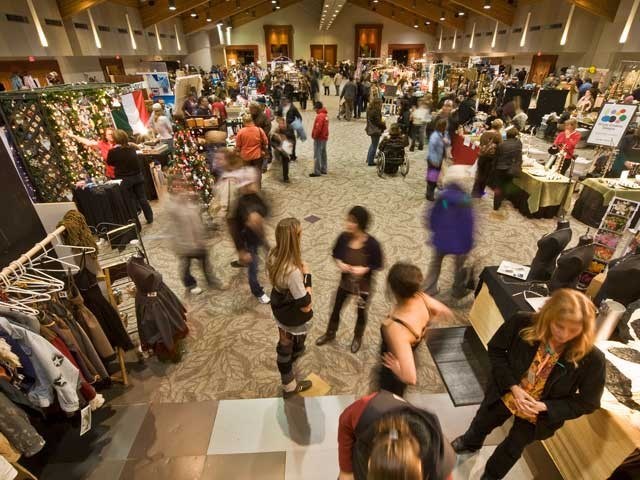 The Telus Conference Centre will be transformed into a veritable winter wonderland this weekend, as artisans from throughout the Sea to Sky region and further abroad gather to sell their wares to the Christmas shopping crowd.

Traci Despatis is the events manager for Whistler Arts Council and organizer of the 20 th annual Bizarre Bazaar. The event offers up two days filled with shopping, music, local artwork, and socializing for tourists and locals alike.

“I believe it started off at Myrtle Philip, and now we’ve grown it big enough that we have over 100 vendors. We still try and maintain at least 65 per cent local – that would be Sea to Sky, most of that being Whistler, though,” she explained.

This year, yet again, the bazaar offers up an impressive roster of new and returning artists from throughout the province that specialize in everything from jewelry, ceramics and fine art to clothing, glass and much more.

Some of the well-known local returning artists are Vincent Massey, sisters Angela and Lara Cooney of Clothes Minded Apparel & Design, and Cori Ross.

Not just any hobby crafter can get a booth at the bazaar, either, as there’s a pretty rigorous jury process. This year alone, they interviewed over 120 applicants for 100 booths, with almost 10 artisans being approved for two spots.

“We also try and not to have two much of any given category, so we kind of cap it off at certain numbers, depending on the number of applications we receive,” she explained, “…We never want too much jewelry, we never want too much clothing, so we always try and have a really good balance.”

But there are also a few opportunities for emerging artisans to apply for a spot at the bazaar, and receive financial assistance to help pay for their booth.

Meg Gallup, the mastermind and talent behind Gallup Pottery, has been creating her practical and artful pieces for almost 33 years now. Her mugs are coveted treasures found within cupboards throughout the region. “They’re almost everywhere these days, as far as being in people’s homes,” Gallup said.

Though the long-time local normally sells her useable, artistic wares from her home, she’s also participated in the annual holiday artisan event for 11 years running.

“The Bazaar has definitely been an institution, and its such a great event,” Gallup said, adding that it’s a great social event for artists who are busy and scattered throughout the region.

The two-day event seems to continue to grow, each and every year, with new artisans eager to come on board.

“The quality keeps getting better and better and higher and higher,” Despatis said, “This year, we’ve got quite a few newer local artists that are showing, so that’s pretty exciting.”

One of the new additions to the Bizarre Bazaar roster is Earthbound Treasures, elaborate macramé necklaces made of stones from South America.

WAC has also extended their Whistler Street Entertainment series into the event, incorporating the brother and sister musical duo of Rachel and Jesse Thom (also known as Mitten Strings), vocalists Dani Quayle, Alice Newton and Trish Jamieson, and the Whistler Singers to enthrall shoppers who’ve gathered to tick a few gifts off their shopping list.

“We’ll basically have, in Village Square, music and face painting and balloon twisting entertainment outdoors, and we’ll also have those people going indoors to entertain the Bizarre Bazaar crowd as well,” Despatis said, “We’ll have roving entertainment as well, so not only will we have Cary (Campbell) Lopes and some of her roving elves and inukshuk going around, but we’ll also have our festival patrol, which is Michele Bush.”

And Alta Lake School will once again run their café in the foyer of the Conference Centre, selling fresh sandwiches, delicious baked goodies, and drinks alongside the arts and crafts zone to occupy kids as their parents shop at the Bazaar.