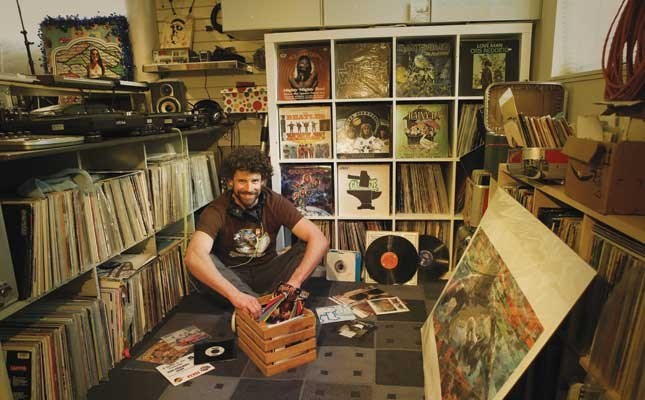 Thom won the Federation of Canadian Artists "Best in Show" award in the landscape category for his painting "The Green Giant." The national competition draws some of the country's best landscape artists and the finalists' work is shown at the FCA's gallery in Vancouver.

Thom says he had no idea he'd won the award until he went to retrieve his canvas.

"They said that everyone was absolutely loving the painting during the show," he says.

"I'm so stoked. No only did I make it into the show — I made it through the jury process to get into it — I've won first place in the show," he says with a laugh. "I was pretty ecstatic. I was jumping up and down when I found out."

"It's nice to have an official award for something. I get lots of recognition but nothing's been official such as that," he says.

As previously reported, WAC is awarding graduating student artists with the Student Art Awards. So, if you're a student and you want free money, it's in your best interest to apply.

Here's the deal: WAC will give out one awards in each category (visual arts, literature, dance, theatre and music) to graduating students at each Whistler, Pemberton and Mt. Currie elementary and high school.

High school Students Art Awards are $500; elementary student awards are $100. Applicants must submit a portfolio of three to four recent works that were completed outside of the school curriculum, along with a letter from a teacher.

Application for the deadline is this Friday (May 4), so you better get cracking on that application if you haven't done so already. Awards will be presented at the graduating ceremonies of each school in June.

The shoulder season is upon us, which means a plethora of venues are closing until the bright, shiny summer. Some of these are temporary while others are — gasp! — permanent.

The Savage Beagle Lounge and Dance Club has shut its doors, and it looks permanent. Eviction notices have been posted to the entrance of the Savage Beagle, indicating that the tenant had not been paying its rent.

The Top Table Group, which owns the building the club is located in, said the lease has been terminated and they're now looking for new tenants.

Doc Branigan's, which hosted the monthly Creative 5 Eclectic, has also closed its doors. For more information on this story, see page 14.

Despite all the rumours, Maxx Fish is not closing permanently. It will close down for some minor repairs and the operators plan to re-open for the May long weekend.

Other temporary closures include the GLC and Tommy Africa's. Normally, the Whistler Blackcomb-owned establishments Merlin's and Dusty's would close for shoulder season, but since the mountain will remain open until late May, there actually isn't a shoulder season and now everyone can rejoice.

Here's your Charlie and the Chocolate Factory reminder

Whistler Secondary's Drama Department is holding its production of Charlie and the Chocolate Factory this week, from Monday, May 7 through Wednesday, May 9 at Millennium Place. Come see Willy! Come see Charlie! Come see Violet balloon into a massive blueberry! Tickets are $10. Shows start at 7:30 p.m.