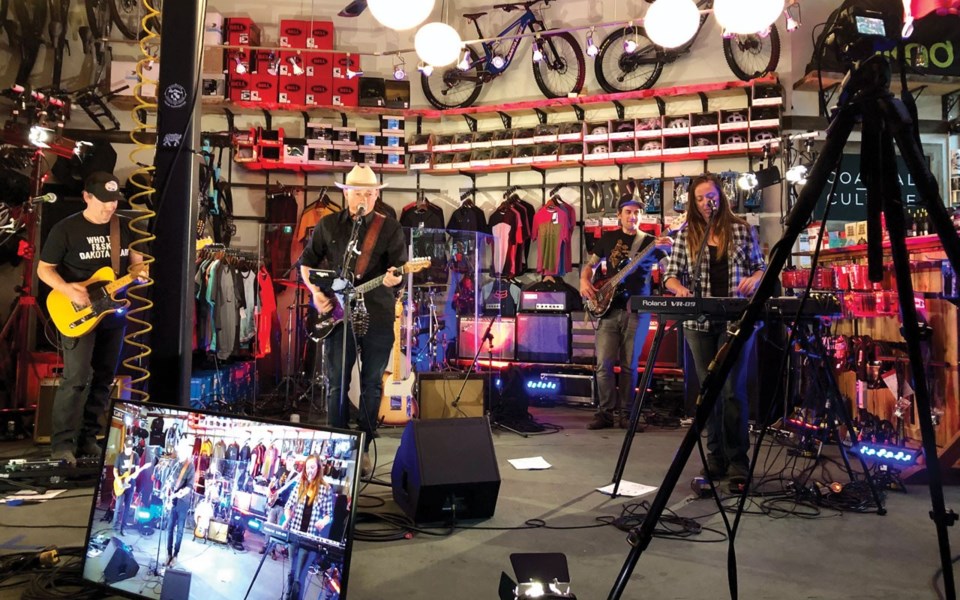 Arts Whistler has paired up with Coastal Culture Sports to livestream shows throughout June. Photo submitted

Everyone has had to find ways to adapt during the COVID-19 pandemic—and that includes members of Whistler's arts and music scene.

"We were looking for some fun programming we could safely do during this time," says Imogen Osborne, programs and events manager with Arts Whistler. "It was perfect. It fit exactly what we wanted to do."

The arts organization first paired up with the Creekside bike and ski shop in May to launch the series. Osborne said they reached out to their large roster of musicians on file to see if any were interested in taking part.

"We reached out to people from Squamish to Pemberton," she says. "The reactions from the musicians have been really positive. They're so grateful to have somewhere to perform. Although they're not performing to a live audience, they kind of are. They're all having fun learning how to communicate and deliver a performance on a new platform."

Logistically, setting up in the shop to adhere to physical distancing has been easier than you might imagine, Osborne said.

"The location is perfect. It's big enough to hold five or six band members properly physically distanced. We go in a couple hours before the band turns up and clear the shop floor. Once the band arrives, the stage is ready for them to go," she added.

One of her favourite moments: when Kinsella and bandmate Marcus Ramsay walked in and saw the elaborate set-up.

"They were silent," Osborne says with a laugh. "They didn't expect to walk into what they walked into. It does look pretty impressive with multiple cameras and light boxes."

To that end, Arts Whistler has programmed the series through June. Next up, catch Conor Fitz & Rad on Thursday, June 4. On June 11 catch The Rebel Appliance, June 18 is Red Chair, and June 25 you can find JennaMae and the Groove Section. All of the shows start online at 8 p.m.

"We're having such a great time learning new skills," Osborne says. "We've never livestreamed before. Adapting to a new way of bringing entertainment to the community has been fun for us. The people watching have also been really appreciating having a livestream of their local favourites."

In keeping with many of the other livestream concert initiatives around town, the sessions also double as a fundraiser for the Feed the Need campaign, raising money for food banks in the Sea to Sky corridor during this time of high need.

Meanwhile, the series is set to wrap up at the end of the month, but Arts Whistler is planning to announce its new summer initiatives in the coming weeks.

"A lot of work goes into our events," Osborne says. "Having to cancel them has been bittersweet, but we know it's the right thing to do. We're all really excited looking at how we can adapt to plan new initiatives—or slightly change existing ones to work through the summer."

To see the full lineup, watch the shows, and find the archived concerts, visit artswhistler.com/blog/bike-shop-sessions.