Aspiring to be the kitchen comedian on stage 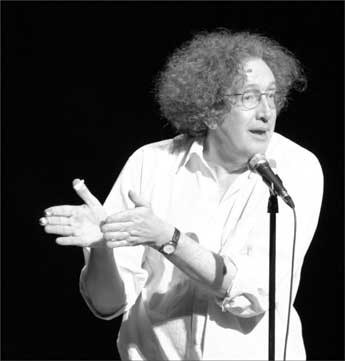 What: Chasing the Big Silly

There are so many comedy greats to aspire to — the infamous Johnny Carson; Larry, Curly and Moe; Canadian legend John Candy.

But Lorne Elliott, a veteran comedian of more than two decades, takes notes from a more humble role model, one most likely a stranger to the big screen and primetime television, but not to kitchens across Canada.

“There is a lot of people that do what I do in daily life; I call them the kitchen comedians,” Elliott said from his Montreal home. “In a social situation, standing around the kitchen, these are the funny people that entertain. I am doing it in front of people who have paid me to be funny. But you’ll find a lot of really great comedians in the kitchen. They are really the geniuses. I am just an apostle. I try to be that (kind of comedian) on stage.”

Elliottt brings his intimate kitchen-feel, one-man show, called Chasing the Big Silly, to Whistler on Monday, Feb. 12 at MY Millennium Place as part of Celebration 2010.

Elliottt is a veteran of the Canadian entertainment scene. He is best known for his CBC Radio comedy series, Madly Off In All Directions, where he mastered his superbly silly performance art of words and music.

Currently something else consists of two CBC Radio specials. His show Chasing the Big Silly will be one of the two shows aired.

But Elliott’s comedy mayhem isn’t limited to radio listening. He opened concerts for Rodney Dangerfield in New York City and Jay Leno in Montreal. His punch lines were regular chuckles at the Montreal Just For Laughs Festival and he has performed in numerous television specials.

When he isn’t on stage, the humourist, storyteller and musician is penning plays, including The Night the Raccoons Went Berserk, which won Best New Play at the Quebec Drama Festival.

He also writes screenplays, television comedies, skits, revues and variety shows such as What Else Is On and Lorne Elliottt’s Really Rather Quite Half Decent TV Special for CBC-TV.

The live stage is what keeps the native Maritimer busy these days, a big step up from his early days of playing acoustic guitar sets paired with humorous banter interludes in bars around the East Coast of Canada.

“Bars are great training,” he said. “You are fighting the short attention span of a nano second.”

Elliott has watched the comedy scene change over more than two decades. From the days when getting into comedy was about getting your foot in the door for directing feature films — like Woody Allen — to comedy selling cell phones and fast food.

“Comedy was looked at as a step to get to something better,” Elliott said of the early days. “It’s been debased, heightened. It’s been used as advertising. People like to laugh. They should respect it as its own thing as its own art form… It’s always performed a function in society. As long as you perform that function, you will be rewarded… Some comedians are over valued, others under valued: but the audience knows the difference.”