Le Paysage was painted during Carr's French period and marks important shift in her style
Dec 13, 2017 5:00 PM By: Brandon Barrett 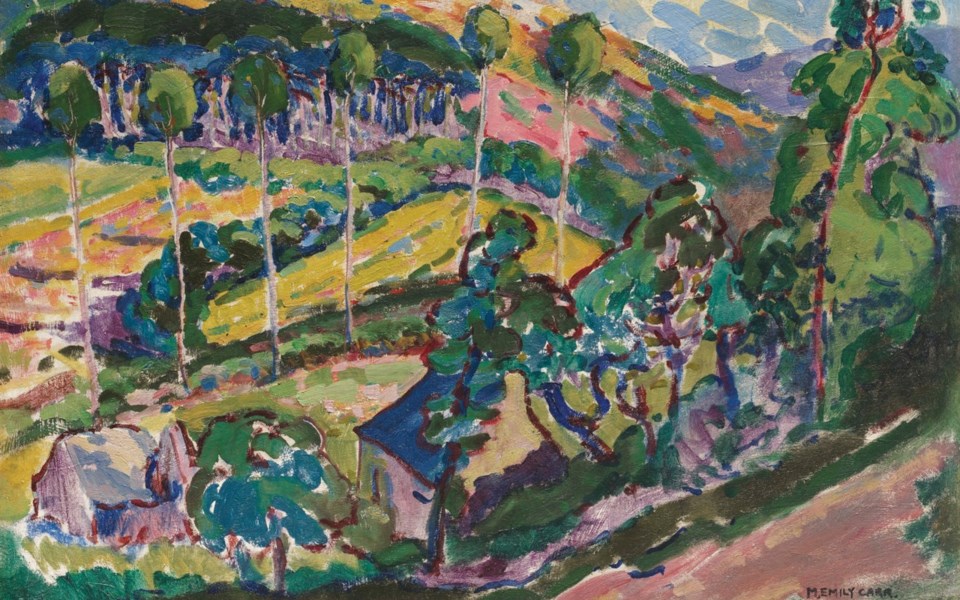 Michael Audain didn't always have the affinity for famed B.C. painter Emily Carr that he has today.

Nowadays, the philanthropist is known as one of the most prominent and prolific admirers of Carr's oeuvre, and the Whistler museum he founded houses one of the world's leading collections of the B.C. artist's work.

But when Audain first encountered Carr's boldly coloured, post-Impressionist style, he had a reaction similar to the art critics who largely panned her work early in her career.

"As a youngster, I wasn't drawn to her. The first exposure I had to her art I found the way she depicted the forest to be quite scary," explains the man behind the Audain Art Museum.

It wasn't until Audain was in his mid-20s, after exploring the museums and galleries of Europe and New York, that he had his eureka moment.

"I visited the Vancouver Art Gallery one day on a lunch hour and it suddenly came to me: Oh my god, this woman is on par with many of the great artists that I had seen abroad," he says. "Of course, having deep family roots in British Columbia, being someone who is also attracted to the art that's been created by the people who have been living here for many thousands of years, I developed an interest in Emily Carr's work." That decades-long passion culminated this week with the Audain family foundation's $1-million purchase from a private collector of an extremely rare Carr piece that has only been exhibited to the public a handful of times over the past century.

"It was most unexpected," says Audain. "I was shocked when (Audain Art Museum chief curator) Darrin (Martens) first showed me the work. I was shocked because I hadn't expected to see it, and certainly not in Whistler."

Owned for decades by a private collector, the painting was one of few remaining Carr works that wasn't exhibited publicly.

Entitled Le Paysage, the oil on board was painted in 1911 while Carr was in Brittany, France studying under British artist Harry Gibb. It marked a massive shift in the Victoria native's creative approach.

"This work is critically important in the arc of the artist's career," explains Martens.

"It fits very well into that collection of Emily Carr paintings and really tells an important story about her and the journey that she had as an artist learning about colour and about different ways of expressing oneself."

Carr's early works largely stuck to the realist style of landscape painters of the era. But her style loosened up considerably during her two-year French sojourn.

"She moves from being a sort of documentary painter to a painter that is much more expressive," Martens notes. "I believe it's very much more in tune with her subject matter and what she was interested in painting."

Le Paysage also holds an important place in Canadian art history as one of two Carr works accepted to the 1911 Salon d'Automne at Paris' historic Grand Palais. The Salon served as the epicenter of artistic innovation in the early 20th century, bearing witness to the birth of Fauvism and, later, Cubism. The fact that Carr, then a virtually unknown female artist from Canada's West Coast, was showcased alongside the likes of Henri Matisse, Pablo Picasso and Georges Braque makes the painting all the more remarkable.

"What this painting represents to me is that, even before Carr started her terribly important work on the B.C. coast, if she had stayed living in France, she had the potential of being considered an important artist of the day. It wasn't just what she depicted on the B.C. coast, it was that she had the ability to capture the artistic sentiment of the times," Audain says.

"It represents a momentous step in her development as arguably Canada's most popular and well-recognized artist."

Le Paysage was installed in the Audain Art Museum's permanent collection on Wednesday, Dec. 13, and will serve as the centerpiece of an upcoming retrospective of Carr's French period, slated to open at the museum in 2019.