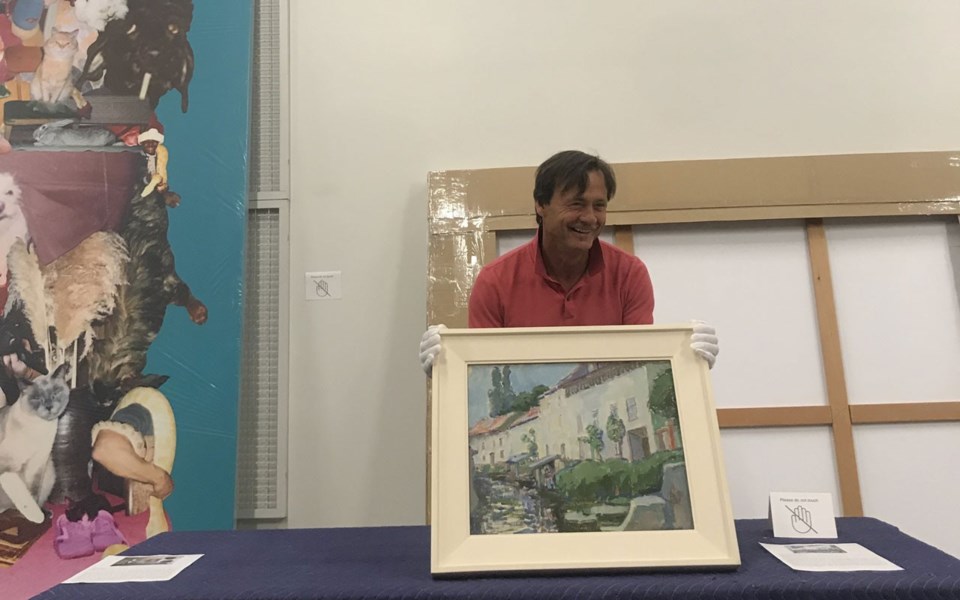 A group of about 15 people are shuffling, single file, over a sticky mat that's marked with shoe prints at the entrance to the Audain Art Museum's vault.

Despite its imposing title, the space appears to be just a room on the museum's second floor that stores a small number of pieces in its permanent collection—only, it turns out, there's more than meets the eye.

"One of the biggest issues, in addition to maintaining heat, humidity, security levels, are things like infestations," Curtis Collins, director and chief curator of the museum, told the group moments earlier. "Mice are not my friend. Insects are not my friend."

To that end, the mat was meant to pick up any seeds, bugs, debris "or pieces of chocolate bar" that visitors might unknowingly track into the room.

There's a reason last Saturday, June 15, was the first time the museum hosted public vault tours. As part of its annual Community Open House weekend (which was sponsored by Pique Newsmagazine), Collins guided the special 40-minute tours throughout the day, offering visitors a behind-the-scenes glimpse into the institution's inner workings.

"This is a fairly standard vault," Collins says. "I've had the opportunity to be in all kinds of vaults all over the world; this one is on the smallish side, to be candid. We're really lucky in the sense that there's a lot of room here ... Part of that is we're a young institution. The other part of it is the museum was built to house the collection. We knew how many objects were coming in here in advance."

While most major art institutions have between one and five per cent of their collection on display, the Audain Art Museums has about 90 per cent installed.

"That was very much integral to Michael (Audain) and Yoshi's (Karasawa) vision for this place," Collins says. "Museums, in their origin, were kind of about hoarding objects. We're more about sharing those objects—part and parcel of why we've never done vault tours prior to my tenure."

Currently, the vault—which, along with the rest of the museum, is carefully monitored for light, humidity, and temperature levels—contains at least two highlights that will soon be on display. The first is a newly acquired photo collage called Dogpile from Vancouver-based artist Steven Shearer, which was on display at Frieze LA before it arrived at the museum two weeks ago.

"We're rehanging the permanent collection over the summer," Collins says. "Part of (the goal) is to bring out some works that haven't been seen before, like this Shearer piece."

The other is the Emily Carr painting By the Canal, Crécy-en-Brie, that will be part of a special exhibit opening on Sept. 21 called Emily Carr: Fresh Seeing—French Modernism and the West Coast. It will examine Carr's year in France from 1910 to 1911.

"For that show, we'll be adding to our collection, as with this piece, but we'll be borrowing from institutions around the world," Collins says.

Part of the reason the museum is able to borrow work from all over the world is because it's built to Class A standards, which means its heat and humidity are strictly controlled to ensure art won't be affected by the elements. Now that it has two years of records proving that, it has also applied for official Class A designation from Heritage Canada, Collins says.

"That's a massive application process ... That's why you're 'in school' because it's very strict," he adds, explaining why he asked people to ensure they didn't have any food or food wrappers in their pockets before the tour.

Along with the two paintings showcased in the vault, the space is also filled with racks of paintings and massive stacks of crates. The crates, it turns out, are hand-built for each piece of art.

"Crating is a whole art unto itself," Collins says. "Objects can't move; they have to be sealed tight."

Transporting pieces from institution to institution is a precise, complicated, and expensive endeavour. Before the tour entered the vault, Collins demonstrated this by knocking on what appeared to be a standard museum wall—only it folded back like a secret door (thanks to some help from a volunteer docent named Nikkie on the other side).

"The reason our wall opens up is because we have these massive crates that come up this elevator (which has a 3,175-kilogram) capacity," he says, gesturing behind him. "Moving art is not a cheap process, I can assure you. When work comes in onto the elevator, we bring it into one of the rooms and let it acclimatize—usually about 48 hours. Again, small fluctuations in heat or humidity affect a work of art, so we have to be very careful in those circumstances."

While most museum visitors won't ever know all the work that goes into getting an exhibit installed, the goal is to ensure the longevity of those pieces. Or, as Collins says, "The idea is you want to keep these things forever."