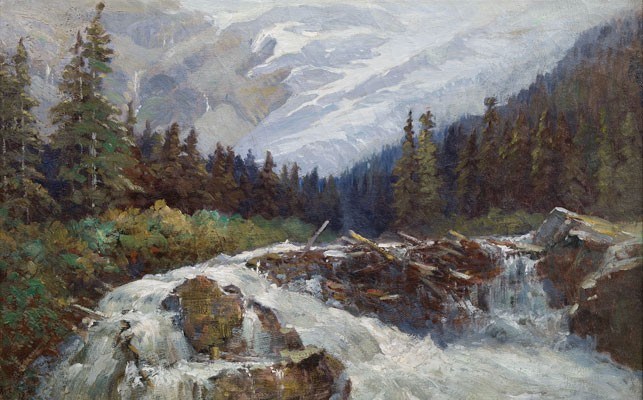 peak to peak Illecillewaet River and Glacier, 1890-1900, by Frederic Marlett Bell-Smith, one of the more than 100 works featured in the Audain Art Museum's largest exhibit yet. PHOTO by Henri Robideau / Vancouver Art Gallery

"Thousands of tired, nerve-shaken, over-civilized people are beginning to find out that going to the mountains is going home; that wildness is a necessity."

Those words from famed naturalist John Muir — or, "John of the Mountains," as he was affectionately known — may as well serve as Whistler's unofficial motto. After all, the resort town has long been a magnet for the over-civilized looking to escape civilization. It's that pull of the wild that makes Whistler such an ideal home for the Audain Art Museum's latest — and largest — exhibition yet. Stone and Sky: Canada's Mountain Landscape takes the viewers on a coast-to-coast journey that explores how some of Canada's top artists have interpreted its vast, mountainous terrain over the past century and a half.

"This is an opportunity for us to look at the mountain landscape over 150 years as a survey of how artists have looked at the alpine landscape over time. It really is about asking questions about this landscape. (Our mountains) have been described as barriers, as things to conquer, to drill through, to do any number of things," explains the Audain's chief curator, Darrin Martens.

Held in honour of Canada's sesquicentennial, the exhibit features works across a number of mediums, including photography, watercolour, painting, print and historical artifacts. The artists on the bill are a veritable who's who of Canadian masters, whether the traditional landscapes of the Group of Seven and Emily Carr, or the arresting visuals of more contemporary photographers and painters such as Edward Burtynsky and John Hartman.

In particular, with this exhibit Martens was interested in asking how our relationship with the mountain landscape has changed from a time when Canada's unexplored alpine still carried a certain mystique to now, when the mountains have transformed into a playground for the masses.

"I think our perception and our engagement with the mountains has changed. Rail opened up the West and the mountains and the coast, and I think the idea of the sublime and something that was this amazing wilderness and mystery is now something that, if we think about mountains and flying over them, one of the things they do is hide clear-cuts. So we went from that discovery and mountain climbing and those types of things, to mountains as objects of commodity. It's an interesting perspective," says Martens.

"Now, we engage from a distance, we don't have that up-close-and-personal relationship with the mountains."

Stone and Sky also tracks the evolution of how artists have chosen to interpret Canada's alpine over time. Early 20th-century landscapists would often immerse themselves in the environments they were recreating, drawing or painting realistic depictions of the mountains. Martens says these artists would also typically paint the mountains looking upwards, almost aspirationally, yearning for a peak they may never summit.

"There was a sense of reverence for the mountains, and I think for most Canadians, there's a sense of respect for them," notes Martens.

Modern depictions differ widely, and tend to reflect the ethos each individual artist is filtering the mountains through, Martens explains.

"Because different artists have come to this subject with different intent, I think there are certain artists that really exemplify certain periods," he says. "An early (Group of Seven founder Lawren) Harris piece, for example, is a quintessential Harris mountain. I've also put a later piece of his next to that, which is from the '60s and it's this highly abstract sort of depiction."

With over 100 pieces, Stone and Sky is the Audain's largest exhibition since the facility opened its doors in early 2016, and Martens believes it will have a broad appeal with museumgoers.

"We've been open for a year and a half now at the Audain Art Museum, so we're still a very young institution, and I'd say we've been experimenting with a few different approaches to our special exhibition program," he says. "I think this exhibition, out of all our exhibitions, has something for everyone, whether they're interested in traditional approaches to painting and the landscape, to photography, to drawing."