Whistler artist Feral Nifty featured in solo show at The Gallery
Jun 3, 2021 9:00 AM By: Alyssa Noel 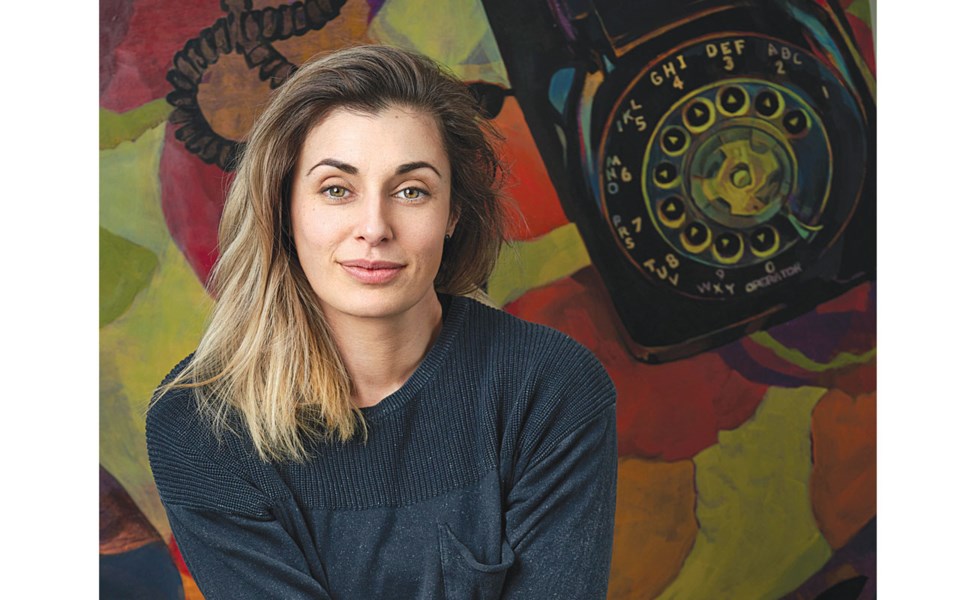 Feral Nifty’s solo show, Back in a Moment, is on display at The Gallery. Photo submitted

Feral Nifty’s solo exhibit, Back in a Moment, can be traced back to an orange rotary telephone that hangs on the wall of Function Junction’s Delish Café.

“They know I was very excited about their phone,” she says. “I awkwardly went in there going, ‘You don’t mind if I photograph your phone, do you?’”

It might seem like an arbitrary object, but for Feral Nifty—who you might also know as Robyn Forsyth—those old-school phones actually carry a lot of different meaning.
For one, most people (of a certain age, at least) have shared memories of dragging the phone cord around a corner, away from curious ears, for a private conversation—or being interrupted during a call and resting the receiver on their chest while responding.

“The stories are unique, but also we all shared it, and I quite like that,” she says.

To that end, the Whistler artist created a series of about 12 pieces all featuring rotary phones in the scene. Some include those phones as the main subject. Others depict characters—young and old, male and female—engrossed in conversation, or, in one case, seemingly waiting for a call.

“There’s one called Another Delay,” Feral Nifty says. “My husband travels a lot; he’s in aviation. I’ll think he’s coming home on Tuesday, but then it’s a Thursday.”

The paintings are set to be on display at The Gallery at the Maury Young Arts Centre as part of her solo show from June 3 to 13.

While she finds the objects themselves compelling, after painting them (and, in some, carving designs into the pieces) she also discovered an added bonus: viewers tend to imagine a whole other storyline about who’s on the other end of the line.

“That’s quite cool to think my viewer is that much involved,” she says. “There’s a lot of paintings where the story is in the piece, but it’s not often the story is a jumping-off point for a bigger story.”

While she’s been creating and sharing her music for some time, Feral Nifty says exhibiting her art is a relatively new endeavour—encouraged by the pandemic.

“I [kept my art to] myself for a long time,” she says. “The pandemic gave me the platform and the timing in life to put in the work so I could feel confident to spread it and share it.”

To that end, the title piece from her exhibit, Back in a Moment, was also accepted into the 2021 Federation of Canadian Artists Vancouver exhibit called On The Edge, set for July.

“It is a competition; I have no idea where I’ll stand in that, but that doesn’t matter,” she says. “I get to hang with other great Canadian artists and that makes me happy.”

Having a solo show in Whistler is its own honour too. A little insider secret: while all the paintings are square, you just might be able to tell which are the newest, judging solely by their size.

“The scale ranges from 16 inches to 36,” she says. “As I got braver, I went bigger. To take up that kind of space was scary at first for me. My next plan is big. Whatever it is, it will be bigger.”

Catch Back in a Moment on display at The Gallery from June 3 to 13. To see more of Feral Nifty’s pieces, visit feralnifty.com.

Spud Valley artists get some time in the Whistler spotlight with Picturing Pemberton
Feb 4, 2021 10:00 AM
Comments