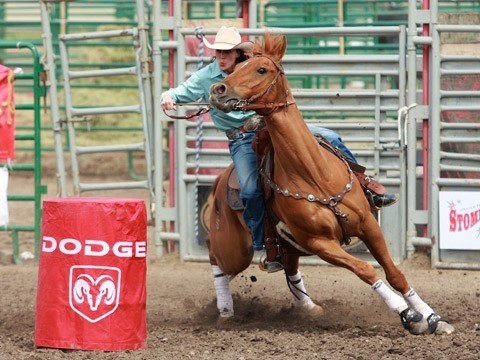 The 60-minute episodes follow 14 professional rodeo competitors as they travel from one event to the next on the western Canadian circuit. As series director and executive producer, Clarkson teamed up with Edmonton producer Don Metz, a rodeo circuit veteran. With several core staff, Clarkson spent eight months travelling to 45 (of a total 62) professional rodeos, from Grande Prairie to south of Medicine Hat, to Abbotsford and Armstrong B.C.

"It's got all the elements of a reality show, but I use the term 'reality show' very loosely, because most reality TV is highly engineered with manufactured scenarios and manipulated situations," Clarkson said. "This series is much more natural. They compete in different disciplines, but it's the classic quest - each individual trying to get to the national finals, to be the national champion. There's prize money, there's judging and there's elimination. And an enormous amount of danger."

"We weren't just in the arena with them; we were in their lives, filming not just how the rodeo affected the athletes, but also their families," Clarkson said. "You pretty much have to be everywhere at once. A leg fracture could not just end a guy's season, it could end his career."

Working from the success of his highly acclaimed series on the Canadian Rockies, The Shining Mountains - which has aired in 18 languages in 26 countries - Clarkson, a long-time Banff resident, pitched the idea to Canwest Global (now Shaw) History Television, despite not knowing exactly what the story would be.

"As with all documentaries, you really don't have a clue until it comes out," Clarkson said. "It was definitely a big team effort, and we were lucky to have such great people who were excited about the topic and the characters to craft the raw materials into stories. It's a real challenge to take 14 lives and weave their stories through eight episodes."

With names such as Grated Coconut, Painted Smile and War Cry, the characters' four-legged cohorts carry their own weight too. Their relationships with the animals are quite different however, as the cowboys attempt to stay with the bucking broncs and bulls a mere eight seconds, while the women barrel racers live with their horses, travelling, feeding and caring for them day after day.

"The animals are characters in their own right," Clarkson said. "The broncs are bred to buck. If I was going to come back in a next life, I think I'd come back as a high performance rodeo animal, they're treated so well."

In that vein, Clarkson said he hoped the series might dispel some myths and misperceptions about the rodeo culture.

"They don't want to harm the animals," Clarkson said. "All these skills and competitions grew from the work it takes to run a ranch. Competitions grew out of seeing who could break the wildest bronc."

For his part, Clarkson's interest in rodeo came naturally, as his great-grandfather and grandfather cowboyed in Alberta when they were young. Clarkson also maintains his own small ranch in the Purcells.

"Also, as a mountain guide, I really identify with rodeo competitors working in dangerous environments," he said. "Their work takes them away from home for long periods of time. And I really admire them as high-level athletes."

The series was not shot as a sports show however, but to highlight the beauty of the Alberta and B.C. landscape and celebrate a segment of Canadian culture and history that few Canadians know much about.

"My understanding and appreciation for the rodeo community went up enormously," Clarkson said. "It is a very close, supportive community. These competitors are motivated by passion, adrenaline, glory, money, comradeship and community. I hope this series really opens a window into our heritage and way of life that not everybody is aware of."

And, he added, he hopes viewers are entertained.

"There's plenty of drama; it's very exciting to watch," Clarkson said. "Nobody makes as much money as a cowboy does in eight seconds. In a good week, they can make $100,000. Or they might just make a little and have enough gas money to get them to the next rodeo."

Now, with the series wrapped up and hitting the air, Clarkson heads back to his day job guiding heli-skiers for CMH for his 31 st winter.

Rodeo - Life on the Circuit premiered on History Television on Tuesday, Jan. 4, and will run three times per week until Feb. 7. To learn more visit www.birdsofafeathermedia.com