Best of the Battle

Top local talent emerges from LUNA’s fourth annual Battle of the Bands
May 8, 2009 7:47 AM By: Holly Fraughton 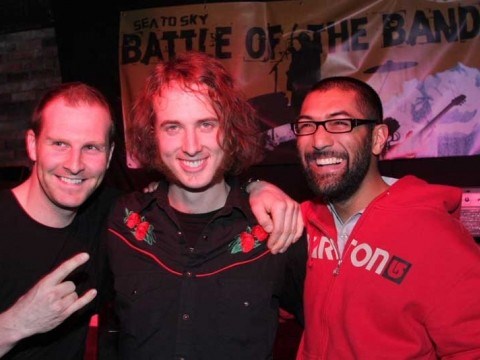 Guitars, drums and microphones: while they aren't your average weapons, local musicians wielded them, instead of guns or knives, during the fourth annual Battle of the Bands last Friday.

Solo artists and bands from Squamish, Pemberton and Whistler took turns on stage at Maxx Fish Lounge, vying for the top spot in the annual talent competition, which is organized by Late and Unique Nighttime Alternatives (LUNA) as a way to help aspiring local musicians to gain performance experience and further their careers.

A brand-new band in town, The Tell Tales, won in the band category, while Dani Quayle captured the title of best solo artist in the Sea to Sky. They walked away with recording gigs at Saga Recording Studio and Waking Alone Productions, an opening spot as headliner with CIA Concerts, airplay and a radio interview on Mountain FM, a limited edition screen printed competition poster from Sage Illustration, a professional two-hour photo shoot with Darren Roberts Studio and a vocal training session with Hilary Wight.

Runner up in the band category was The Rising Tide, while Alice Newton was selected as runner up solo artist. Each will receive airplay and a radio interview on Mountain FM, plus a paid gig at Merlin's from Club Shred.

Whistler's winning rock band, The Tell Tales, features Ryan Doucette on drums, Rajan Das on bass and Mike McDonald on vocals and guitar. The group came together just three short months ago, but in that time, they've managed to create 18 original songs.

"The great thing about Ryan and Raj is they're so talented. I was booking gigs before they ever really knew the songs very well!" McDonald said. "...It's been really easy with these guys."

Two of their members are quite familiar with the Battle of the Band experience - Das and McDonald actually won the competition last year, McDonald as a solo artist, and Das as part of the Jon Shrier Band.

But with an incredibly talented lineup of competitors this year, McDonald and the rest of The Tell Tales weren't sure who was going to emerge victorious.

McDonald attributes their success to their laidback attitude and approach to music.

"We just go out and play the songs the best that we can and we're having fun up there, I think that was probably one of the biggest advantages for us," McDonald said. "...Because if you're not having fun and dancing, then you can't really expect anyone else to be."

All the members were eager to enter the competition in hopes of scoring the valuable studio time that goes with the top prize.

"The whole package is a really great - the Mountain FM interview, photos, vocal lessons, which are great for me - and ultimately, to get into the studio, because it's just so expensive," McDonald said.

Their band actually just dropped $1,500 on recording, and now, with the additional eight hours of studio time they won at Battle of the Bands, they should be able to get enough material together to put out an album.

In the solo category, Dani Quayle is a 23-year-old singer/songwriter originally from Sydney, Australia. She's lived in Whistler since 2006, regaling local audiences with her "finger-picking, fret-slapping, and percussive thumping style acoustic guitar," but the Battle of the Bands was the first music competition she's ever entered.

"It's hard to stay focused on one thing in Whistler, but this year I've been really focused on making my own music and creating my own sound," Quayle said. "I felt like Battle of the Bands would be a good motivator for me to take my music more seriously."

It seems that she managed to charm the audience and judges with her blend of melodic pop, folk and indie. Now, she hopes to record a demo to help kick-start her musical career.

"Performing live is what I love, so if from this competition I am able to do more of that I will be stoked."

Kate Mason co-produced the 2009 Battle of the Bands and has been involved with the event since its inception four years ago.

This year, they held the semifinals on the same day as the finals to make the event more convenient for the artists, and held the event at Maxx Fish. Three semifinalists were chosen by a panel of judges. Soloists were Alice Newton, Dana-Marie Battaglia, and Quayle. In the band category, Zombie's Locker, The Tell Tales, and The Rising Tide made it to the finals.

"Whistler has a very varied musical landscape. We have a lot of rock bands, a lot of reggae, and Jack Johnson influences, that kind of thing, and I think that is definitely reflected in our competition," Mason said.

The competition has also seen increased support from businesses and the music industry over the years.

"We've been fortunate to be able to secure better prizing as Battle of the Bands has progressed," Mason said. "In the beginning, at our very first Battle of the Bands, the prizing was very minimal, and this year we have over $5,000 worth of prizing, so I think that keeps people coming back to further their career."

"It's good for the music industry - it gets them into Whistler, so they get lots of promotion from that, and as well, at heart, I think most of our sponsors are music geeks."