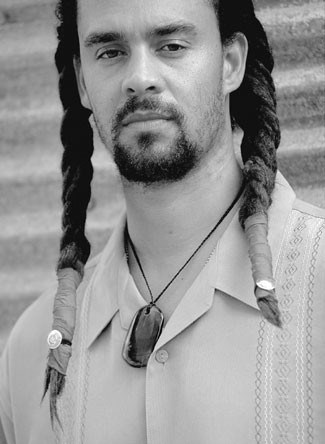 He worked with lyrical poet William S. Burroughs. Now this is a creative musician.

"William was extremely interested in hip hop music before he died, and how people would take a section of a paragraph (written by him) and put it into a song," says Michael Franti, leader of the band Spearhead.

Franti chatted by phone while sampling sounds for a new album he’s putting together at Sugar Shack Studios, established in San Francisco five years ago. Well known for music that explores social issues amid beats, Franti does not disappoint with the band’s new album Stay Human, released last year.

"I like to write inspiration music, that helps people get through their day," he says.

Franti’s inspiration comes from survival and protection mode as an adoptee growing up in Davis, California.

"I always felt an affinity for the underdog, as I do in my music. I didn’t really feel like I fit in where I grew up, so there were some difficult times."

One song off Stay Human speaks of "all the freaky people are the beauty of the world," Franti says it’s all about the mind-set people share.

"For people that are eccentric, the straight people probably seem more freaky. Mind you William (Burroughs) is immortally freaky!" he laughs.

Franti, with constant projects on the go, remains in wonderment of the world’s people. It’s as though he’s in and out of contemplation all the time.

"I pride myself on creating music that celebrates cultural diversity. Around 1986, I was writing a lot of poetry about the situation in South Africa, while at university. Moving was a good way to explore different ways of living, and most of my ideas come from conversation," says Franti.

But his music is more than just lyrics about the state of the world.

"Sometimes is a song that makes you want to get up and dance. But in terms of the lyrics, I’m talking about those feelings we all go through in different phases, about how we feel about ourselves (and our lives)."

Previous to Spearhead, Franti played for industrial group the Beatnigs, and the Disposable Heroes of Hiphoprisy. His collaboration with William S. Boroughs, a spoken word and music compilation in 1993, was titled Spare Ass Annie and Other Tales.

Part of Franti’s contribution to the community is speaking in both schools and prisons.

"I go to high schools to chat and perform, where young people are so unfettered by life. They’re just interested in whether something is right, or wrong, and it’s good to get in touch with that (kind of simplicity)," he says.

The SnoCore tour, which begins Feb. 15 in L.A., includes Karl Denson’s Tiny Universe, Blackalicious, and Saul Williams. Franti and company leave the tour and jump to Australia after the Whistler show for three weeks of performances Down Under.

And what will they play from their musical repertoire of slow and fast melodies?

"Any requests?" he politely asks, a truly modest musician.

"People in the Middle!" I reply. "Ok sure, we can add that to the list," says Franti.

And on that note, the new tracks beckon.