Bobs and Lolo: not just for kids 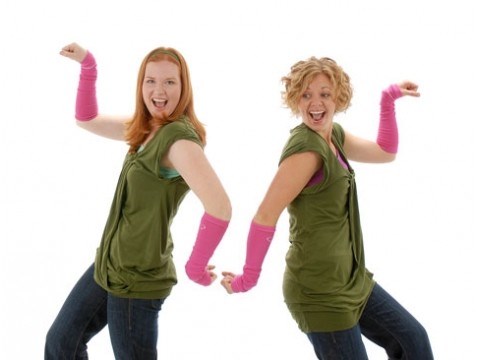 Oh my God, have you ever heard "Baby Beluga?" It's the most annoying song of all time. It never ends! What's with these children's songs and endless repetition? Children's music has been the saviour and the bane of every parent on lengthy road trips. That repetition, I swear, can make your head explode.

So thank God for Bobs and Lolo, who take the Woody Guthrie approach to children's music by fusing elements of social change with songwriting chops that adults can actually enjoy. It's the reason they've won three Parents' Choice Award and recently been nominated for another. Parents can actually sit through an hour-long performance for their children without skulls exploding from the repetition.

"We appreciate just how often parents need to listen to the music," says Robyn (Bobs) Hardy from her home in North Vancouver.

Since 2004, Hardy and Lorraine (Lolo) Pond have been winning over new fans, mixing peppy pop song craft with pro-environmentalism messages. All three of their albums focus on positive living, both inward and outward. Since 2010, their music videos have been featured in regular rotation on Treehouse TV.

"We just want to make sure that children have a childhood like we did - just getting outside, getting outdoors and (knowing) how refreshing it is to enjoy nature," Hardy says. "Just to go for a hike, go for a bike ride and breathe the fresh air, and take care of it too for others because if we do it now then other kids can do the same as they grow up."

They take their environmental stance seriously. They've forgone lyric sheets in their CDs and print all their lyrics online. All their DVDs include vegetable inks and cornstarch trays. All their T-shirts are made of bamboo cotton.

They are influenced by the Vancouver Island landscape they grew up in. The pair met as children and stayed friends throughout high school and university, singing together in choirs. By 2003, they were both working as educators in Vancouver - Hardy was an elementary school teacher and Pond was a public educator at the Vancouver Aquarium. Both were using music in their day-jobs and decided to pair up and write some songs together.

The idea was to catch the children early enough to influence in some way the decisions they make about the critical environmental issues that everyone is now facing.

"That was a big thing for us," Hardy says. "It was always education first and foremost," she says. "There is some kids music out there that's a little bit fluffy, it's just out there for fun. If we can add the educational content, that's even better. The kids will absorb it like sponges."

They started performing together at the aquarium and before long they were invited to play at birthday parties and other events around the city. Now, eight years and three albums later, they're on their way to carrying the torch that Raffi and Fred Penner lit with children's music in the 80s.

So when Fred Penner invites Bobs and Lolo to sing onstage whenever they play the same festival, it's like Eddie Vedder singing with Neil Young, except in a totally different genre. It's a highlight for the kids and the parents might suddenly remember that they were, like, totally in love with "The Cat Came Back" when they were kids. And maybe everyone will sing along, generations united. n