Big John Bates and the Voodoo Dollz return to Whistler to rock the Cornucopia crowd at ARTrageous
Nov 6, 2009 7:02 AM By: Holly Fraughton 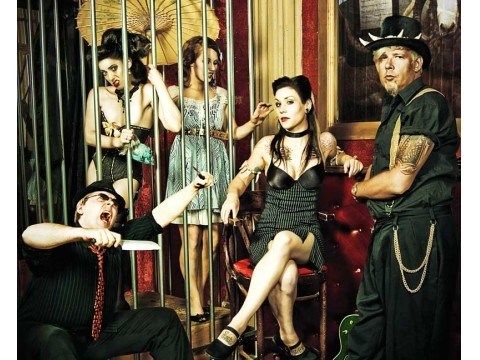 Who: Big John Bates and the Voodoo Dollz

When Big John Bates and the Voodoo Dollz step onto stage, there's no half-hearted head-nodding and foot-tapping in the audience. No, there's just something about this live trash blues act that brings out the wild side in just about anyone who has a drop of music in their soul.

Is it Bates's charged lyrics, Brandy Battery's thundering upright bass, or JT Branders larger-than-life rhythm on the drums? Or maybe it's just the sexy burlesque get-ups. Who knows, who cares - it just works.

Big John Bates and the Voodoo Dollz have rolled into Whistler many times before, playing at events like the Telus World Ski and Snowboard Festival, New Year's parties, and the annual barbecue championships.

"They've always been jammed full of people and everyone is just out for fun," Bates said, chuckling. "I don't recall ever having a bad time in Whistler."

This time around, however, they've been tapped to play Whistler's 14 th official art party - ARTrageous - hosted by the Whistler Arts Council. And this isn't your average party. A sold-out event each year, it draws professional talent and members of the public into one incredible evening of creative debauchery, featuring live art, music, dancing and a few drinks, of course.

Bates isn't exactly new to the music business. As a teenager, he was actually part of a successful heavy metal band, Annihilator, which sold over a million records. He ultimately left the group to do his own thing, and though it took a while, he eventually cultivated his unique sound - which he refers to simply as trash blues - that fuses vintage rhythms and beats with roots and punk influences.

"I was more into bands like The Cramps," he recalled. "Just more rock and roll kind of show-based bands like Alice Cooper. I like bands that put on quite a bit of a spectacle."

And spectacle seems to be the name of the game when it comes to a performance with Big John Bates and the Voodoo Dollz - Little Miss Risk's lovely and talented burlesque dancers that take the stage with Bates.

"It's dancey in a very old school way - we use a lot of swing beats - and I think that it's generally upbeat," he explained. "...It started off just being go-go, then it went to burlesque, and now it's almost a performance piece that's going on onstage."

Described as a "vivisection of Rocky Horror's dark humour and a three-ring circus," the band's live show is a true force to be reckoned with. And the highly-visual aspects of their show really have helped them to cross cultural barriers with their European fans.

"Sometimes you can't speak to the audience," he said. "You know, if we're playing in Hungary, I don't know much Hungarian, so I have to be able to get everything through to them just visually."

Bates was in Vancouver earlier this week recovering from the group's latest tour, which started in March and saw the band traipsing across Europe and North America, twice, and swapping out bass players and dancers, occasionally.

Sounds like a bit of an understatement. Strangely enough, this Canadian band has a much stronger following in Europe and even in the United States.

"(Trash blues) isn't really recognized by people. Here, people go, 'oh, you're a rockabilly band" and that's far from the truth - I don't play any rockabilly guitar. But because we have an upright bass and a hollow body guitar, it looks rockabilly," Bates said.

They've headlined gigs and festivals in 15 countries, taking the stage with the likes of The Supersuckers, Th' Legendary Shack Shakers, Los Straitjackets, Corb Lund, Robert Gordon, New Bomb Turks, the Belrays, Koko Taylor and Jooles Holland, and played for some pretty unusual crowds, like the inmates of a federal prison in Belgium.

"That was one of the stranger ones," Bates said with a laugh. "For sure, that was pretty awesome."

They released their first album, a seven-inch vinyl, in 1999, and they just released their fourth album, Bangtown , in Europe last spring. Now, the band is getting ready to unleash it on the Canadian crowd.

Of course, Big John Bates and the Voodoo Dollz are just one piece of the puzzle that is ARTrageous this year.

DJ Vinyl Ritchie will be spinning before and after the band's set, and 30 artists from the Sea to Sky region have been tapped to contribute to the ARTrageous S2S Masterpiece Exhibit, portraying each artist's ideal masterpiece, and incorporating these definitions and perspectives into a piece that will be showcased in "visual debate" at this year's party. Plus, photographer Matt Walker is organizing the Photo Studio Experiment, where attendees can dress up (or down) to have professional photos taken with friends.

Canadian All Terrain will also be running a free shuttle service from the Whistler Village taxi loop every half hour starting at 8 p.m. taking passengers to Creekside. The last shuttle from Creekside to the Village leaves at 1:15 a.m.