Jurassic 5 emcee and founder of Ozomatli steps out on his own with solo debut album, North American tour
Sep 24, 2010 8:13 AM By: Holly Fraughton 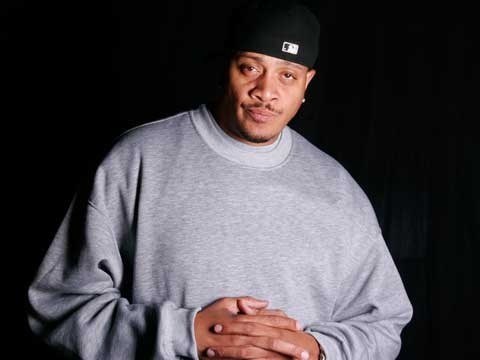 Cost: $20 in advance at www.ticketweb.ca and GLC

Charlie Stewart - or as he's known to hip hop fans, Chali 2na - is basically this generation's James Earl Jones of LA's underground rap scene. With a booming baritone and charming stage presence, this emcee has a serious way with words. And he's clocked plenty of time on stage and in the studio doing the group thing as a member of Jurassic 5 and founder of the salsa funk band Ozomatli.

But just last year, the rapper released his first solo album, Fish Outta Water , proving once and for all that he's a well-rounded and capable musician in his own right. On top of his experience with J5 and Ozomatli, Chali has firmly established himself on the hip hop scene as the go-to guy to bring in on collaboration projects (he's lent his lyrical talents to artists like Beenie Man, the Damian Brothers and K'Naan's America track, most recently). But the time had come for him to step out on his own.

So, in July 2009, after five years of toiling in the studio and battling with his record label, Chali released his debut solo record as an indie release on Decon Records.

"I played the part of a soldier in an army called Jurassic 5, and what you saw was my ability to bring up the rear or what have you. But I wanted to do a whole project just to prove to myself that I could do it, one, and two, to use it as an opportunity to describe to the people who I actually was outside of what they knew."

See, Chali is more than a musician; he's actually a multi-faceted artist who spends a lot of time drawing, painting and even acting. Having a well-rounded appreciation of the arts has helped him to continue to evolve as an artist over the years, as well as keep him interested and focused on his music.

"They inform one another, but sometimes it's like I can't get one out if I don't get the other out," he explained. "So it's like if I'm inspired to paint, then I'll be painting and I'll almost have writer's block, but then when I get closer to the end of the painting, I'm going to find all this stuff starts to spew out and I've gotta go grab a pad and write it down, or vice versa."

Though Fish Outta Water was a solo project, Chali decided to call in some favours and bring in some of the heavy hitters he'd collaborated with over the years. The end result is a 15-track album that features impressive and diverse tunes like International with Beenie Man, Lock Shit Down with Talib Kweli, Don't Stop with Anthony Hamilton, Keep Goin' with Choklate and Guns Up with the Marley Brothers.

"To be perfectly honest it was like all of the names I'm fans of, and it was just a series of trying to see if they were willing to help me realize my project, and they were."

As an emcee, it kind of goes without saying that Chali is something of a word nerd (his lyrical flow is consistently clever and tight), but he's also wise enough to recognize that you can't neglect the beat when crafting a track.

"There's no real method to the madness," the humble fixture on the hip hop scene reflected.

The project was a real labour of love, and ultimately served as an "identification process" for the artist. A lot of blood, sweat and tears (and time) went into perfecting the project. In fact, Chali actually compares the process of finishing the album to a painter finishing a piece.

"They say that when you paint, you don't finish a painting, you just agree to stop painting," he laughed. "So it's kind of like that."

"It was a personal accomplishment of mine and it boosted my confidence in a lot of ways."

So, does that mean there's another solo album on the way? Chali paused, then let out a deep chuckle.

"At this particular point, I'm working on just a kind of organic feeling, kind of sounding album, and I want it to feel organic in a way that counteracts what's actually going on right now," he explained. "...So just to push the envelope back to more musicianship, more melodic, a more music-practice album."

But right now, Chali is touring North America, hitting lots of stops along the West Coast on the way.

"They've been good, they've been really good," he said as he made his way from Banff to Golden for another show on Tuesday. "Really good turnout, really good response."

He'll roll into Whistler this weekend for a show at the GLC, playing with a live band, The House of Vibe All Stars. He'll be bringing with him some material from his J5 days and his solo album, as well as a bit of new material from his mix tapes and his newest album-in-the-works to test-drive on the crowds.

"It's one of those things where its like a hodge podge of all of the events that happened in my career, so I can't really walk away from a performance without at least covering a certain span of the time of the creations of my work," he said. "So I had to put it all together in a cohesive fashion that makes it really entertaining for the people as well as dynamic-sounding and feeling.

"I'm coming to bring some energy, so be prepared to sweat a lil' bit," he chuckled.