Children’s Art Festival has something for every kid 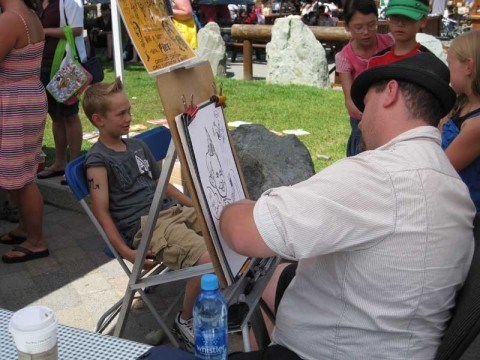 They say Wolfgang Mozart could play the harpsichord by age three and read music by age five. Pablo Picasso completed his first piece of art at the age of eight and was putting on gallery exhibitions by the time he was 15.

That's not to say that every child can be a prodigy, but if they never try than you'll never know. At the very least, arts give children the ability to have fun expressing themselves creatively - and parents some very cool things to stick on their refrigerators.

This year, July 17 to 18, marks the 27 th annual Whistler Children's Art Festival, produced by the Whistler Arts Council. Every kid born and raised in Whistler for the past three decades has likely taken part.

Despite funding cuts, the Whistler Arts Council has focused its funds on the Children's Festival. When combined with donations of money and art supplies, and event sponsorship, the result is a full slate of workshops and entertainers that will rival any year.

"There will be some cuts to ArtWalk that people will notice, but for the Children's Art Festival there is just as much entertainment and it's just as good as past years," said Ali Richmond, manager of communications for the Whistler Arts Council.

Richmond is urging families to register early, as many of the workshops are expected to sell out before the day of the event. To give kids more opportunity to take part, they have also decided to keep the schedule the same on both days in case there is a conflict.

"If parents or kids miss a workshop they want to take because there's another workshop they can come back on the second day and take part," explained Richmond.

"We don't want unhappy children because they missed out on any of the workshops. But that said, there are tons of free activities and entertainers so there is a lot going on whether you're in the workshops or not."

The festival is geared to kids of all ages, with pre-school activities for kids aged three to five, workshops for kids in Grade 7 and 8, and a variety of workshops for the whole family. Mandatory online registration is required for some of the workshops, with the registration getting underway on Friday July 9 and closing on July 15. The price ranges from $5 to $10, which includes all art supplies.

Other workshops are available by onsite registration only. The schedule is posted at www.whistlerartscouncil.com, but some of the highlights include:

Animal Jars - decorate jelly and sauce jars with an animal theme to hold toys, coins and other collectibles. Kids three to five with adult supervision and age six and up.

Backyard Birdhouses - Assemble and decorate your own unique birdhouse using simple materials like toilet paper rolls, paper plates, paint and yarn. Kids three to five with adult supervision and age six and up.

Beading with Glass - Make your own decorative glass jewelry with professional assistance, and take it home with you. Ages six and up.

Bear Paw Print T-shirts with Michael Allen - Local bear researcher Michael Allen will show kids how big a bear's paw can be while you make a bear-print T-shirt using an actual paw. Ages six and up.

Crazy Kites - Make and decorate your own kite using recycled materials. Kids three to five with adult supervision and age six and up.

Fairy & Gnome Houses - Use natural materials to make a house in your yard for a Fairy Princess of Gnarly Gnome. Kids three to five with adult supervision and age six and up.

Pet Village - Use sticks, acorn tops, rocks and glue to create a selection of critters to take home. Kids three to five with adult supervision and age six and up.

Shaggy Shakers - Jesse Thom will lead this workshop on making furry music companions you can take home. Kids three to five with adult supervision and age six and up.

T-Shirt Mania - Use shapes and colours to create your own T-shirt print and learn the art of silk screening and stencil design. Come away with the perfect personalized shirt. Kids three to five with adult supervision and age six and up.

Trapeze Flying with Vancouver Circus School - A special rig will allow participants to safely learn the art of the trapeze, including knee and angle hangs and a backflip dismount. Ages five and up.

Juno Award-winning children's entertainer Norman Foote, who uses props to set the stage and deliver the punchlines, will headline both days of the event, complementing a long list of entertainers.

Ventriloquist Kellie Haines tells stories and jokes with her puppets Magrau and Kamilla.

Maximime is an internationally-recognized mime and performer.

The Blues Berries have performed across the northwest, crafting blues songs for a young audience. They recently won Children's Album of the Year at the West Coast Music Awards.

The CheonDoong Korean Drummers use a variety of traditional drums to replicate the sounds of nature.

The Inner Ring Circus is bringing a troupe of performers who mix comedy, courage and creativity in their live performances.

Chris Hamilton and the Sticky am Band are rising stars in children's music, recently nominated for Outstanding Children's Recording at the Western Canadian Music Awards.

Circus Fungus is a troupe of talented artists and performers who use costumes and circus skills to tell a story.

Kokoma is a Vancouver-based African dance and drum performance company.

Kutapira is a world drum ensemble that plays traditional percussion from around the world.

Mitten Strings are a children's music duo who put an emphasis on interactivity with costumes, funny poems and their secret "Magic echo box."

The Ta Daa Lady is a puppeteer and performance artist who recruits members of the audience to help her tell her fantasy stories.

The workshops take place in Creekside with a variety of tents and play areas, as well as stages and performance space on both sides of the bridge.

Admission is $5 per child per day. Adults are admitted by donation.