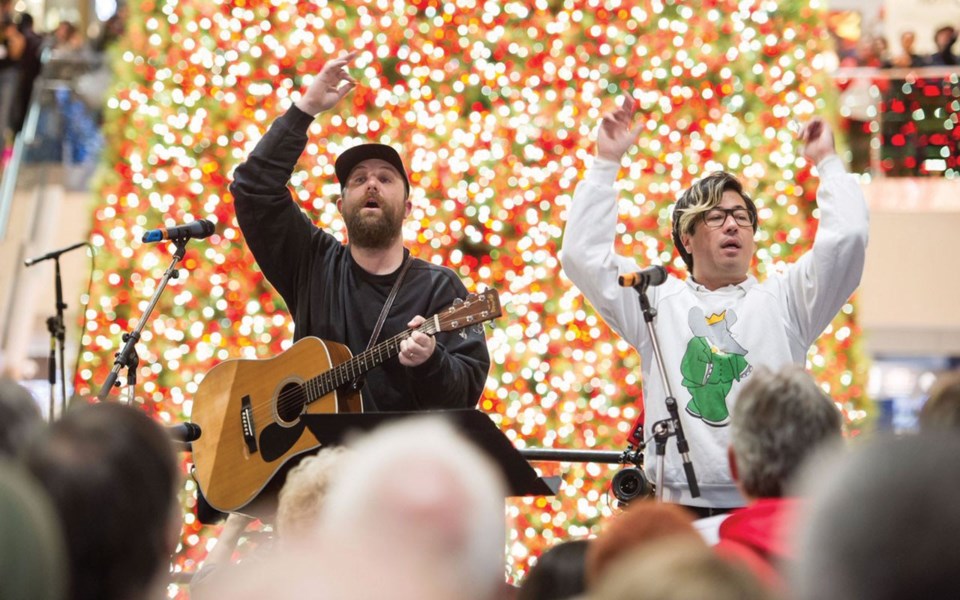 When Daveed Goldman and Nobu Adilman first started the weekly Toronto-based comedy and music project back in 2011, they deliberately steered clear of the Top 40 pop hits they didn't listen to in their daily lives.

"When we first started out it was about establishing identity," Adilman says. "We did songs that were more obscure. It was more precious in that way. It was important for us to establish who we were. It would've felt weird to us if we did Britney Spears off the top. It wasn't what we were listening to. As it evolved, we felt confident in who we were."

Today, you'll find everyone from Justin Bieber to Taylor Swift—alongside Queen, and Pearl Jam—on the sheet music handed out at the door of their shows.

For the uninitiated: the audience at Choir! Choir! Choir! events receive a lyric sheet when they arrive, learn the vocal arrangement of the song, and then sing it there together. It's a simple formula, but one that's launched them from a Toronto event to an international touring project.

"We didn't have a strategy for this project. It was just a fun night out with our friends. We've been doing it for nine years and it's organically grown. We weren't feeling pressure to create anything. We don't have financial pressures or expectations ... The thing that was most shocking was we grew so fast we just felt we had to keep pace with what's going on," he says.

This summer alone, the pair has travelled everywhere from New York City to Ireland and Greece.

"We found a way to be in many different places and different types of venues," Adilman adds. "We do everything from small little bars to theatres."

Almost exactly a year ago, they also made a stop in Whistler for the first time at Whistler Olympic Plaza. "It went really, really well. You never know when there's these open-air concerts how many people will show up, but people came out and it was beautiful," he says.

They're set to return to the same venue on Friday, Aug. 30, again as part of the Whistler Presents Outdoor Summer Concert Series. This time, they're tackling Journey.

Returning to towns or cities often brings return audiences, but in Whistler, it's a bit of a different story. "I don't know how many people who showed up [last year] were local or travelling," he says. "It's the hardest and most exciting part of Choir! Choir! Chior! We've built a model that is total chaos. We never know how our night is going to go. We never know who's going to be there."

That said, Adilman encourages Whistlerites to set their inhibitions aside and come ready to belt out a tune.

"Don't get hung up on the fact that you were told never to sing in public," he says. "Bring your friends and family ... Choir! Choir! Choir! is just a huge party and we all get to make it together."