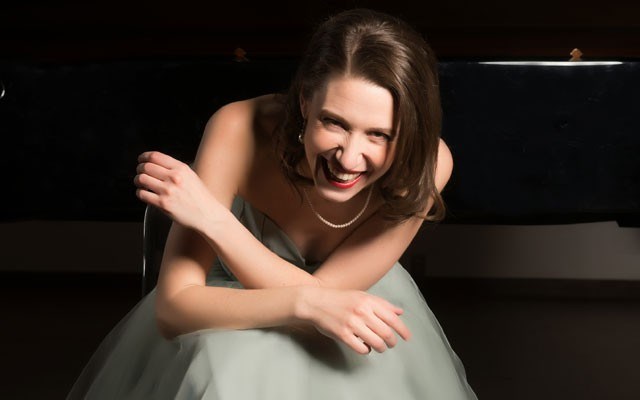 She performs two very different shows at the Maury Young Arts Centre at the beginning and end of the month.

The first show is an exploration of the connections between classical music and jazz with pianist Søren Bebe on Thursday, March 3, and the second with cellist Rebecca Wenham on Wednesday, March 30.

"It is funny. I rarely say no," Hagen says with a laugh. "It was just the way the invitation happened."

Bebe, a jazz pianist, is a longtime friend of Hagen's who she met at The Banff Centre.

"We were having breakfast together around Christmas 2014 and we talked about what we were up to," Hagen says.

"People love classical and think they hate jazz, and vice versa, but the styles are actually very close."

Hagen says their show will start with a duet that is partly written and partly improvised and inspired by Bach.

From Bach the pair moves to French music and leads into songs by Edith Piaf.

"Then we'll play a fiery Spanish piece that we thought would fit in," Hagen says.

"We decided that it would be dangerously pedantic to explain to people what was happening. We decided to choose a theme called 'In Pursuit of Beauty' a pure theme of music."

It gives them the opportunity to move from subdued to a more passionate style of playing, she adds.

"We build it up slowly over the hour. Our last pieces are a prelude by Rachmaninoff that is so gorgeous and strangely modern sounding, and a Danish folk song," Hagen says.

The show with Wenham is all-classical, piano and cello.

"We're playing a Beethoven sonata that is so interesting; the way the piano and the cello share lines and weave in and out of each other. We're also playing a set of Spanish songs that have been arranged for cello. They have beautiful stories, they're love songs," Hagen says.

"There is also a romantic piece by Schumann."

Vancouver-based Hagen won first prize in the 2013 Bradshaw & Buono International Piano Competition and had a solo performance at the Carnegie Hall in New York the same year. She was named 2015 Artist of the Year by the BC Touring Council.

"I am on the road from September to May. I do come home and unpack my suitcase in practice, but I program a whole season," Hagen says.

"Other artists might have three months out or only do two weeks out, but I try to be out touring all the time. I like it and I am my own boss."

She says that there is call for classical music in every corner of the province.

"The discussion of whether classical music is dying has been going on for decades, which cracks me up. I don't pay attention to it," Hagen says.

"I'm living it so it must be happening."

Her desire to build a career started six years ago at home in the Comox Valley on Vancouver Island. She took a DIY approach.

"I figured that if I wanted to play concerts I had to put them on. I outgrew my living room for the stage and I realized that people are hungry for every kind of music, including classical."

Her two albums can be found on her website www.sarahhagen.com and on Amazon.

All ages are welcome to both shows. Tickets for each is $23 for WAC members or $25 for non-members, and can be purchased at the Maury Young Arts Centre box office or online at www.artswhistler.com.