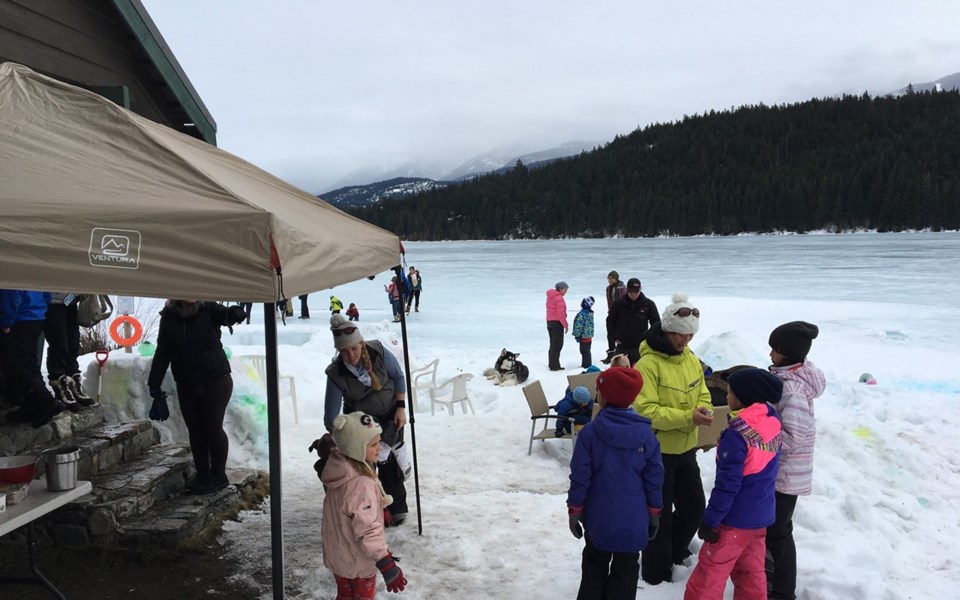 Approaching half a decade of running the Cypress Point Winter Carnival, the biggest thing Stephen Vogler has learned is that you're at the mercy of Mother Nature.

Maybe that's why this year's theme is "Let Winter Prevail;" it's instructions to the weather from Vogler and his volunteers to bring the best conditions for when The Point Artist-Run Centre hosts its fifth annual bash on Sunday, Feb. 11 starting at noon.

"It's so dependant on what the weather is going to be doing," said Vogler, The Point's artistic director. "We had over three feet of ice last year, we couldn't get a chainsaw through the ice — to cut blocks for ice sculpting — it was so thick. Other years we've had thick ice and no snow at all, just green grass. We've had piles of snow (too), like this year is shaping up to be and kind of mushy ice, so it's really interesting how it's oriented around the weather. But we have a bit of a formula for this one, daytime activities and then rip it up a night with a good dinner and dance."

The carnival was first started to combat the blahs of a lengthy winter season, while also giving opportunities to local artists. A combination of indoor and outdoor activities run from daytime until night, the all-ages festival ended up being a natural fit for the Family Day weekend, even though the B.C. holiday was barely established when The Point first came up with festival the idea.

"This is such a winter town that five years ago, we thought it would be great to have a celebration of winter, right in the middle of it all around the time that other winter carnivals happen in Quebec and other places. Thus, the Cypress Point Winter Carnival was born," said Vogler.

This year for the ticketed evening festivities, the headlining act is Vancouver's the Staggers & Jaggs; a five-piece ensemble featuring mostly strings and self-described as "freak folk."

"The band is really great. Emily Molloy put me onto them. She's connected to a lot of other bands in Vancouver and across Canada," said Vogler. "These guys are a really cool kind of gypsy punk. I really like (them) and I think most people will. People love dancing down at The Point on that old wooden floor."

Along with the show, there will be a hearty dinner cooked up by local chef Michele Bush, featuring a Dijon honey baked ham and scalloped potatoes. During the meal, guests will be serenaded by local Bradford Needham on The Point's recently restored 1905 upright piano.

There will also be an auction for paintings by local artists Lisa Geddes, Bea Gonzalez and Andrea Mueller. The paintings are created live that day, and reflect the landscape of the afternoon. The chance to commemorate the day is one of the reasons the festival was reduced to one day last year, rather than running events across two days. That and it greatly reduces the amount of work that needed to be done.

"It was a bit much for all the volunteers, there's a lot to do for a winter event like this. I've been out shovelling for the last hour," said Vogler, who lives near the centre. "But we have a great team and you get better at these things after you've done them a number of times."

With a long-term forecast showing an average temperature of around 2 C in the week leading up to the event, it's still unclear what the ice conditions on Alta Lake will be. In the past, there has been hockey and curling on ice so thick, attendees could simply walk across the lake to get there.

Even if the ice is a no go, there will be plenty of events during the day, including snow sculpting and ice carving competitions, live music, a fireside sing-along, a costume trunk and craft-making. There will be a variety of food served throughout the afternoon, like chili, mac and cheese, spring rolls and the big hit from last year, Swiss raclette — a cheese fondu from Raclette Girl. Adults can also enjoy a drink from the specially constructed ice bar.

Afternoon events are free (food is extra), while tickets for the evening show are available at www.thepointartists.com and at Armchair books. For adults it's $30 for dinner and $15 show-only. For children under 12, dinner is $20 and show-only is $10.