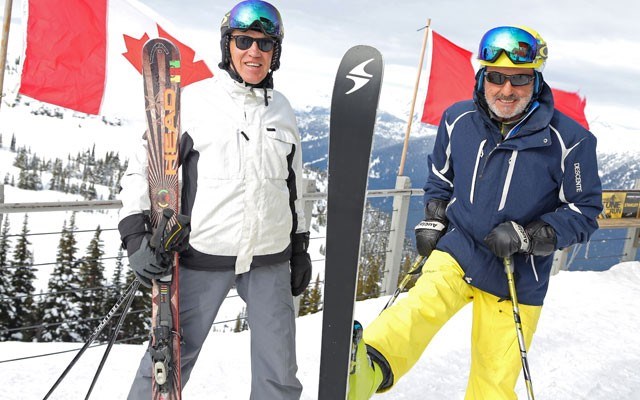 Two seniors who are ski instructors from Whistler are part of a new documentary on active seniors in B.C.

Filmmaker Elton Hubner has been working on the project The Fit Generation for two years, and recently launched a crowdsourcing campaign.

"I found the stories of these seniors very inspiring," Hubner said in an interview. "It has been a long process to make this documentary, one or two people would not tell the story of the variety of things that seniors can do in Canada. I wanted to show the challenges, too."

The Fit Generation tells the stories of six British Columbians in their 70s and 80s who have overcome cancer, arthritis, chronic back pain, knee replacements, lasting injuries, and the loss of loved ones to lead active and inspiring lives.

Eighty-two-year-old George Tjelios-Nicholas and 73-year-old Marcel Richoz, both from Whistler, are taking part.

The Kickstarter campaign runs until the third week of January. The hope is to have the project completed for festivals next summer.

For more information on the film and to donate to the Kickstarter campaign, visit: www.thefitgeneration.ca.

The weather lately has been doing its best to welcome the next King or Queen of Storms, and Whistler Blackcomb obliged by naming the six international photographers who will be competing at the 11th Samsung Deep Winter Photo Challenge on Saturday, Jan. 7 at the Fairmont Chateau Whistler.

The People's Choice Award also returns, with online voting, and a chance for the snappers to vie for $1,000 and a trip for two with Whistler Heli Skiing.

Competing for total prize money of $10,000 are: Guy Fattal, an outdoor sports photographer from just outside Jerusalem, currently based in Whistler this winter; Swedish photographer Alric Ljunghager, a member of The Bunch ski crew, recent winner Photo of the Year at the 17th Annual Powder Magazine Awards; Colin Wiseman from Bellingham, WA; Shannon Skouras from Naches, WA; Whistler-born Michael Overbeck; and Vancouverite Ilanna Barkusky, who was named "one of five female ski photographers to follow" by Freeskier Magazine.

Tickets to Deep Winter are $25 and available at www.whistlerblackcomb.com/deepwinter or by calling 1-800-766-0449.

Work by artist Vanessa Stark has been selected by Whistler Blackcomb for its annual Artist Series Retail Collection.

Stark's one-of-a-kind prints are being sold on T-shirts, sweatshirts, baseball hats and mugs at Essentially Blackcomb, Roundhouse Traders and Blackcomb Ski & Sport. There are three images: a bear, an owl and two mountains.

Five per cent of sales will be donated to the Whistler Blackcomb Foundation.

Stark is doing a live painting from 11 a.m. on Friday, Dec. 23, at the Roundhouse Traders on Whistler Mountain to promote the collection.